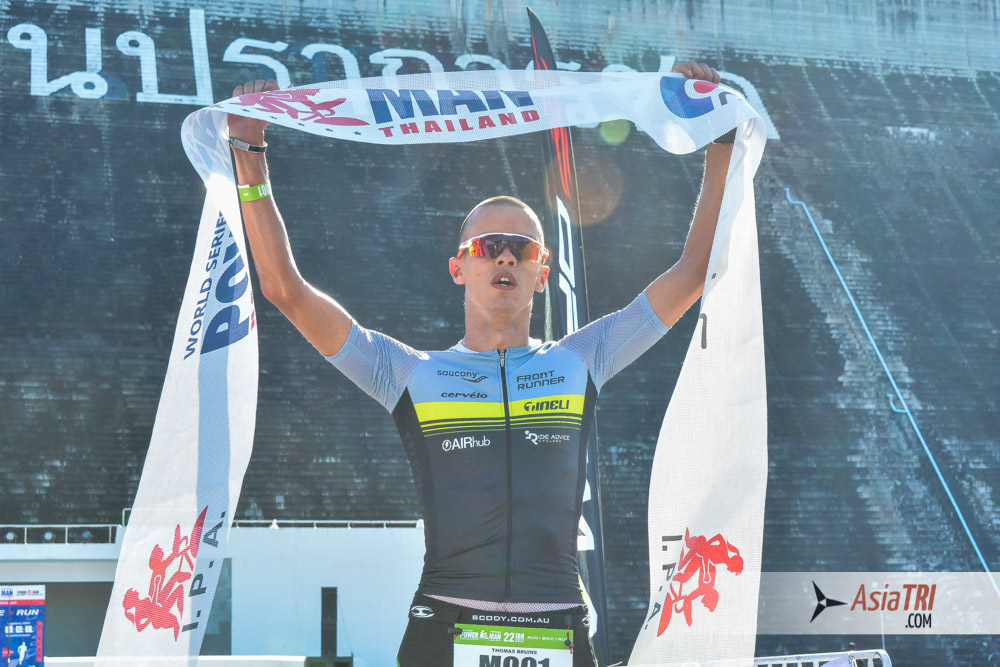 Thomas Bruins of the Netherlands and Anna Eberhardt-Halasz of Hungary won their respective elite titles at the inaugural Powerman Nakhon-Nayok in Thailand. In the first 10k run, five duathletes composed of Thomas Bruins (NED), Ritchie Nicholls (GBR), Joey Delos Reyes (PHI), Ivan Vlasenko (RUS) and Robeno Javier (PHI) were in the lead pack until the seven km mark.   First to be dropped was current Philippine champion Delos Reyes, followed by newly-turned professional Vlasenko, who is based in Bangkok.   Upon entering T1, multiple Filipino duathlon champion Robeno Javier was able to keep up with pre-race favorites Bruins and Nicholls.  They all finished within 2 seconds of each.  The pack ran conservatively, as Nicholls registered the fastest 1st 10k run split with a time of 37:17.

See the best photos from the inaugural Powerman Nakhon-Nayok Thailand.

The favorites Bruins and Nicholls  immediately distanced themselves from the former Philippine champion Javier, and rode on the lead pack until the 45km mark of the 60k flat but windy bike course.   That was when Bruins, a top 10 ranked duathlete in the world ITU points list, went to work and dropped Nicholls for the lead. Bruins was able to gain a minute advantage over Nicholls approaching T2, and was unchallenged over the last 10k run.  Though Nicholls, a member of the Thanyapura Pro Triathlon team,  ran the fastest 2nd 10k run at 38:44, Bruins was only 12 seconds slower over that split.   Bruins finished with a time of 2:45:14, with a winning margin of 1 minute and 32 seconds over Nicholls.

Delos Reyes was able to catch up with Vlasenko in T2 via a superior bike split, but just could not hang with Vlasenko on the run.  Ivan Vlasenko completed the podium spots by capturing third.

Airi Sawada of Japan, a familiar face in the asian powerman racing circuit, had the women’s best first 10k run split, entering T1 first at 42:54.   She was followed by Hungary’s Anna Eberhardt-Halasz who got into T1 16 seconds behind Sawada.   Eberhardt-Halasz was at a different level at the bike leg as she went unchallenged througout the ride.  She finished the 60k bike in 1:32:21, more than 11 minutes ahead of Sawada, and 23 minutes ahead of the only other women’s elite, Mandana Dehghan Manshadi of Iran.

Eberhardt-Halasz coasted on the finishing run, while also flashing the women’s best last 10k run split at 46:43.   She would win the title at 3:03:39, 12 minutes and 6 seconds faster than Sawada.  Manshadi or Iran was third. “The first Powerman in Thailand was an eye opener, especially the picturesque view of Nakhon Nayok. The refreshing and energising environment fueled my confidence to contend for the podium, and I am happy with the outcome as the first champion of the race. Based on my observation, I am surprised by the turnout and the quality of the participants,” said Thomas.

Powerman female elite category winner Anna stated that the competition was intense despite having it in a new host city. “Racing to the top was steep with challengers tailing closely. But through perseverance, I manage to overcome all the difficulties and led the race. Joining Powerman in a new country was exciting and learning curve for me.”

Four categories were available for participants of different fitness level: Powerman Classic and Classic Relay (10KM – 60KM – 10KM), and the Powerman Short and Short Relay (5KM – 30KM – 5KM). The run-bike-run race format requires athletes to be at their top physical and mental level to compete for the race. Top three winners of each individual category and the champions for the relay categories were presented with a golden ticket each to participate in the upcoming 2017 Putrajaya ASTC Powerman Middle Distance Duathlon Asian Championships on Sunday, 5 March 2017, at Putrajaya, Malaysia.