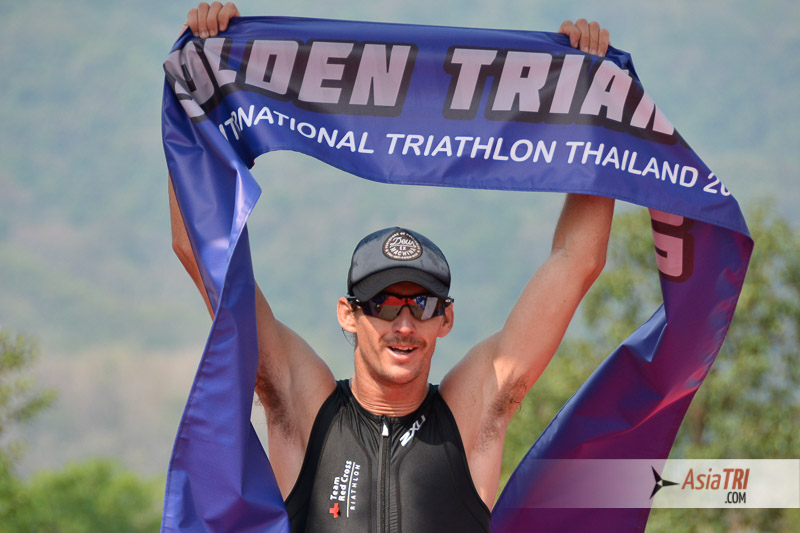 Mitch Robins from Australia and Parys Edwards from the U.K were the champions of the Golden Triangle Triathlon, the unique race that takes part across three different countries, Thailand, Laos and Myanmar. The distances were 1.7k swim down the Mekong river, 53k bike ride and a 11k run from Thailand to Myanmar, then back

A group of relay athletes were the first out of the water, the first triathlete out was Caleb Sadler from Australia in 10:13, pre-race favorite Mitch Robins was twenty seconds back. Brooke Langereis led the women out of the water with Parys Edwards twenty five seconds back.  The fast swim splits were due to the strong current of the Mekong river.

A pack of four athletes including Sadler, Mitch Robins, Ben Hammon and a relay athlete, stayed together for the whole ride until the very end when Mitch Robins opened a small gap and reached transition one first with the best bike split of the day in 01:16:21

In the chase pack eventual second place finisher Jaray Jearanay was riding with Jurgen Zack, but managed to open a gap on the later stages of the bike.

Out on the run Mitch quickly distanced himself from the main group and had a comfortable lead, cruising to the win with the day’s best run split in 43:54. The biggest mover of the run was Jaray Jearanai who managed to overtake Ben Hammon and Caleb Sadler to finish in second place overall and the first Thai across the line. The young Caleb Sadler who is based out of Phuket, was third.

Parys Edwards who did this race as a training day for her next event at Ironman Putrajaya next weekend, pusghed hard on the run with the day’s best run split in 49:34, Brooke held the second place while Carole Fuchs was third.