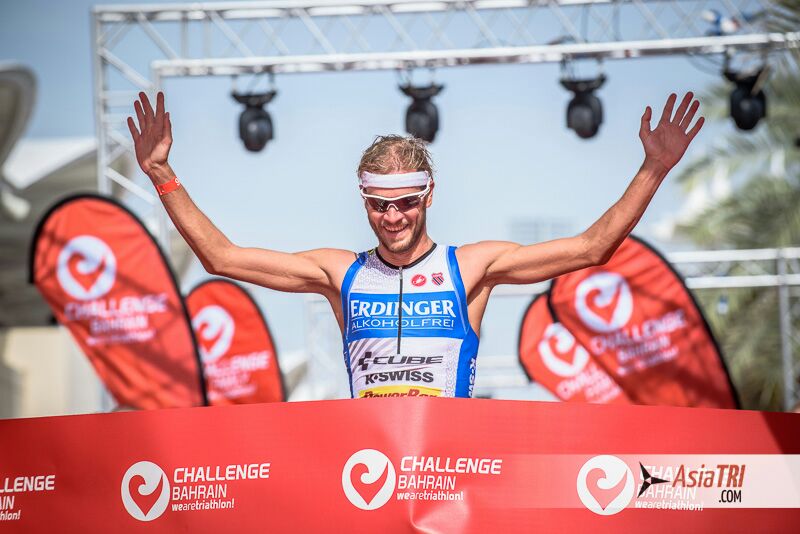 Dylan McNeice led the swim leg and exited the water in 21’12” (1’07”/100m pace), he was followed closely by Pete Jacobs and Michael Raelert. Race favorite Sebastian Kienle entered transition 1 with a two minute deficit to the leaders. Another two strong contenders Timo Bracht and Dirk Bockel didnt swim well and were far back from the leaders.

Early on the bike, it didnt take too long until Pete Jacobs went ahead to set the pace, but it didn’t last long as Michael Raelert took the lead until the 30km mark when german uberbiker Andreas Dreitz was leading the chasing pack in second place followed closely by Tim Reed and Sebastian Kienle. Unfortunately, Kienle who is the 2014 World Ironman Champion were forced to pull over due to a flat tire. German Andreas Dreitz took the lead on the 50k mark and was the first into the second transition. His bike split was 1h57’21”, which results in an impressive average speed of 46,1km/h. Raelert was third place into transition two minutes back followed shortly by Australian Tim Reed.

Dreitz looked tight early onto the run, while Raelert started his half marathon at a very fast pace and looking relaxed and fresh. Half way into the run, Raelert took the lead and held it until the end. The German had the best run split of the day in 1h10’19”(3’21”/km avg pace).

He took the inaugural Challenge Bahrain in 3h36’04”. Dreitz held onto the second place in 3h38’24”. Tim Reed was third in 3h3924”. Tim Don forth and Spaniard Eneko Llanos in fifth.

See also:  From Zero to Hero - Tum's journey to a full distance triathlon

Jodie Swallow led the swim in 22’39”(1’12”/100m pace) with Annabel Luxford, Meredith Kessler, Helle Frederiksen, Mary Beth Ellis and a few others not far behind.
Swallow maintained her lead on the bike with a strong pace, but always followed closely by  Rachel Joyce, Helle Frederiksen e Annabel Luxford. The ITU superstars Jodie Stimpson and Lisa Norden were also within striking distance early on the bike, but slowlylost ground to the leaders. On the 30km mark, Caroline Steffen and Meredith Kessler were 2’30” behind the leaders and were still losing time.  Mirinda Carfrae was even further back. Angela Naeth exited the water with a 3’ deficit but with the best bike split of the day in  2h10’14” (41,5km/h avg speeda) she started the run in 5th place together with the other four athletes that had a bike split of 2h12’20”: Swallow, Joyce, Frederiksen e Luxford.

Luxford and Frederiksen were the first ones to exit the transition area, with Swallow and Joyce just behind. Frederiksen attacked early on and only Swallow was able to match. But it wasn’t long before Frederiksen opened a gap to the british and to te rest of her competition. Joyce managed to overtake Swallow and took the 2nd place. Helle Frederiksen won wit a time of 3h55’50”, Rachel Joyce, once again was 2nd in 3h58’14”. Jodie Swallow held onto the 3rd place in 3h58’39”. Annabel Luxford and Angela Naeth were 4th and 5th