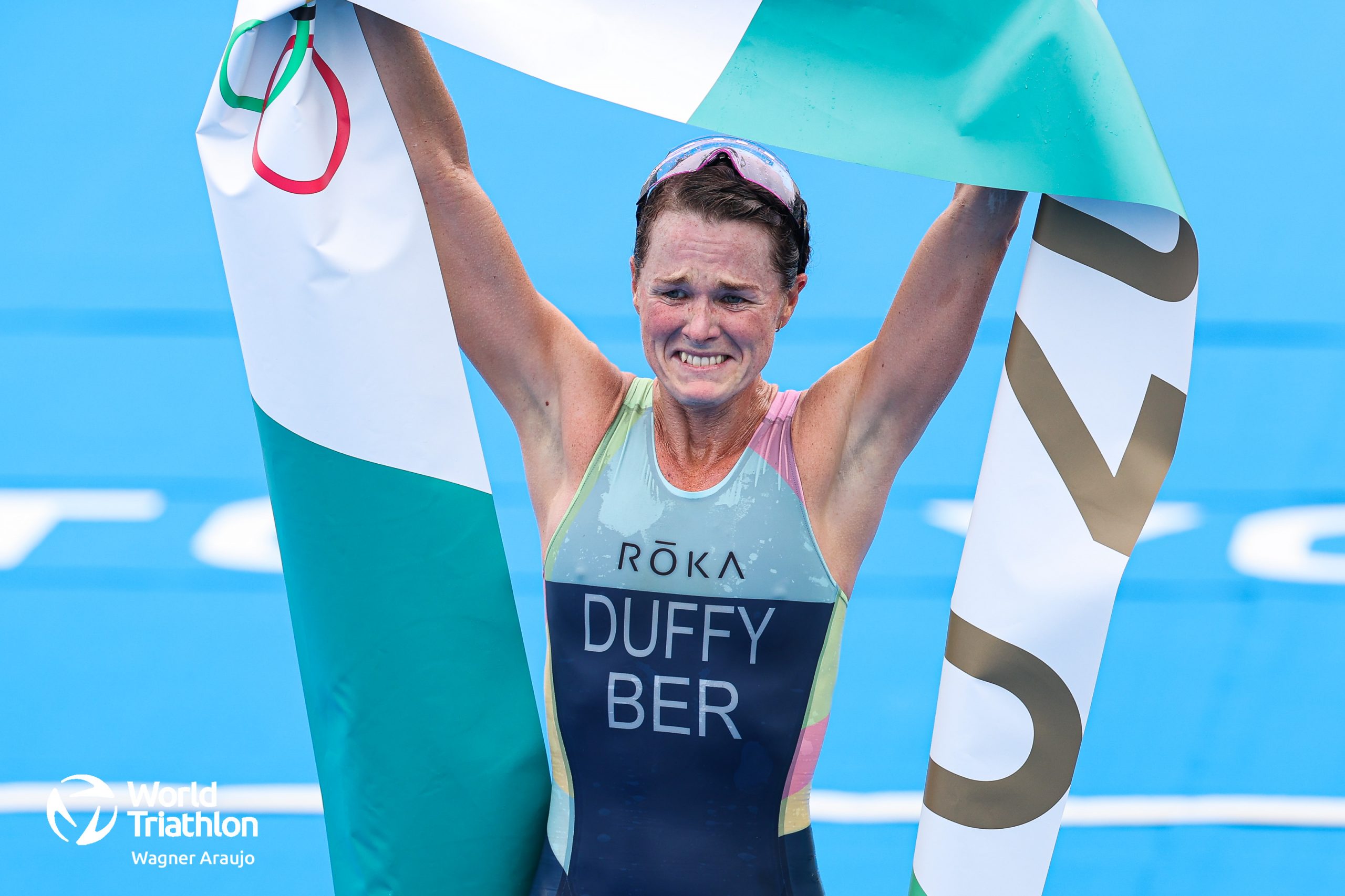 What an Olympic journey it has been for Bermuda’s Flora Duffy. On Tuesday morning at Tokyo 2020 she produced the performance of a true champion, powering through difficult conditions on the bike and then pulling away emphatically over the 10km run to win the Olympic gold she craved and that the display so richly deserved. After finishing 45th at London 2012, 8th in Rio the same year she won her first world title, today at Tokyo 2020 she topped the podium with one of the best races you are likely to see.

Great Britain’s Georgia Taylor-Brown won a brave silver having suffered the misfortune of a puncture right at the end of the bike segment that put her 20 seconds off the front and fought back into contention, USA’s Katie Zaferes winning the bronze and an equally hard-earned podium on a tough day in Tokyo.

“To be an Olympic champion has been my dream since I was a little girl and did my first triathlon,” said Duffy. “Going through my head, I guess was a bit of relief, coming into the Olympics as one of the favourites, there’s a lot of pressure and expectations. I guess I also knew that I was Bermuda’s first medal hope in many, many years and something I wanted to achieve for myself but also for my country. I was definitely overwhelmed, I didn’t know what to do, what to think. It was a really special moment.”

—
It was 06.45 local time Tuesday morning in Odaiba Bay when the 54 women took to the start line for their shot at becoming Tokyo 2020 Olympic Champion. Heavy rain in the hours before the race had let up but the drizzle – like the challenge ahead – remained. The pressures of the biggest race of their lives, the heat and humidity of a Tokyo summer and the five-year wait for their shot all came together to deliver something truly special.

Once they got underway, the action never let up. From the opening strokes of the swim it was Jessica Learmonth (GBR) pushing the pace and with more chop in the water than the previous day’s men’s race, the stronger swimmers quickly pulled away on lap one.

That lead group were setting a rapid pace early on, so it was Katie Zaferes (USA), Summer Rappaport (USA), Vittoria Lopes (BRA), Laura Lindemann (GER) and Georgia Taylor-Brown (GBR) and a great first lap from Duffy left her just 10 seconds off Learmonth. Vicky Holland (GBR) was 27 seconds off her teammate, Maya Kingma (NED) 30 seconds and Nicola Spirig (SUI) was 48 seconds back, with USA’s Taylor Knibb already a minute off the leaders.

The second lap saw no let up as Learmonth looked to keep the gameplan ticking and create a distinct lead group that could pull away even further together on the bike. Following those seven leaders, Emma Jeffcoat (AUS) was next out 42 seconds back, Kingma now almost a minute off with Nicola Spirig and Cassandre Beaugrand 70 seconds back.

Duffy wasted no time in hitting the gas and soon the leaders settled into their familiar groove up front, while behind them the slick conditions saw Ainsley Thorpe (NZL) and Anastasia Gorbunova’s (ROC) races sadly over early in the bike. The rain slowed but rarely stopped long enough to help conditions improve.

At the end of lap one, the seven leaders had 60 seconds over the Spirig-led chasers, Rachel Klamer (NED) and Rio 2016 bronze medalist Holland part of a 14-strong group looking to organise themselves and try not let that gap extend any further.

Spirig was doing plenty of work to keep them in the hunt and they were soon joined by Rappaport, dropped by the leaders on lap 4. At the 20km mark the gap was still just over a minute to the first chasers and just over two minutes now to Lotte Miller (NOR), Taylor Knibb and Holland, but the rain started to fall again for the closing laps.

Vittoria Lopes then began to lose touch as Duffy and co refused to let up the pace with two laps to go, and it began to look like a battle between the five big guns to decide the podium. Bad luck in the form of a flat tyre for Georgia Taylor-Brown right at the end of the bike saw her drop 20 seconds at the worst possible moment, as the remaining four of the group streamed onto the blue carpet.

The bikes racked, shoes on and transition negotiated for the final time without any issues, there was now just 10km between them and Olympic glory. What unfolded was nothing short of a masterclass from Duffy.

Looking every bit in control from the very first strides, she carved out a gap within the first 1km and never looked back. Behind her, Zaferes was holding on, and Learmonth – her challenge seemingly gone – saw Taylor-Brown pass her and get back into the chase and take on fluids to pursue the medals.

With the American soon in her sights, it became a tactical play for the silver as Duffy stretched further away towards that golden Olympic horizon. With 5km to go, Duffy was out of sight 47 seconds clear of Zaferes, Taylor-Brown now on the American’s shoulder, Lindemann and Learmonth being closed down by the likes of Periault, Klamer and, inevitably, Nicola Spirig.

Duffy had time to soak up the joy of victory and knowing she had etched her name even deeper into triathlon immortality down the final chute, falling to the floor as the emotion poured out. Behind her, Taylor-Brown had passed Zaferes and was pulling clear for a gutsy, equally emotional silver, the American’s face lighting up as she crossed for the bronze.

Exhausted in fourth place was Rachel Klamer after an excellent run saw her to the cusp of the podium places, followed by Leonie Periault. Nicola Spirig ran her way into sixth, Alice Betto of Italy edging past Laura Lindemann for seventh. Jess Learmonth and Valerie Barthelemy rounded out the Tokyo 2020 Olympic top 10.

“The puncture wasn’t ideal, I heard it literally blow with about 2km to go when we were coming out of the park” said Georgia Taylor-Brown. “I thought it was my brakes but then the next thing my wheel got very bumpy. I was right near a wheel station but decided not to stop because I would have lost more time. So I just rode on the flat. I managed to get back on the girls on the straight, going under the bridge, but then it was the corners, I couldn’t do it. I did panic, that’s the whole race I have been in front and I have lost it with a few kilometres to go on the bike. I just had to keep my cool, not rush through transition, try and get everything right. I definitely went out quite hard on the first lap of the run but I think it paid off because I got back in the race and it made me me more aggressive to be back in the race and not fighting from the back.”

“I knew if had six weeks of hard training I could get myself into a good spot,” said Katie Zaferes. My dad passed away in April and I had two really rough races so to have the confidence to execute that today, and to be on the podium today makes me so proud.”