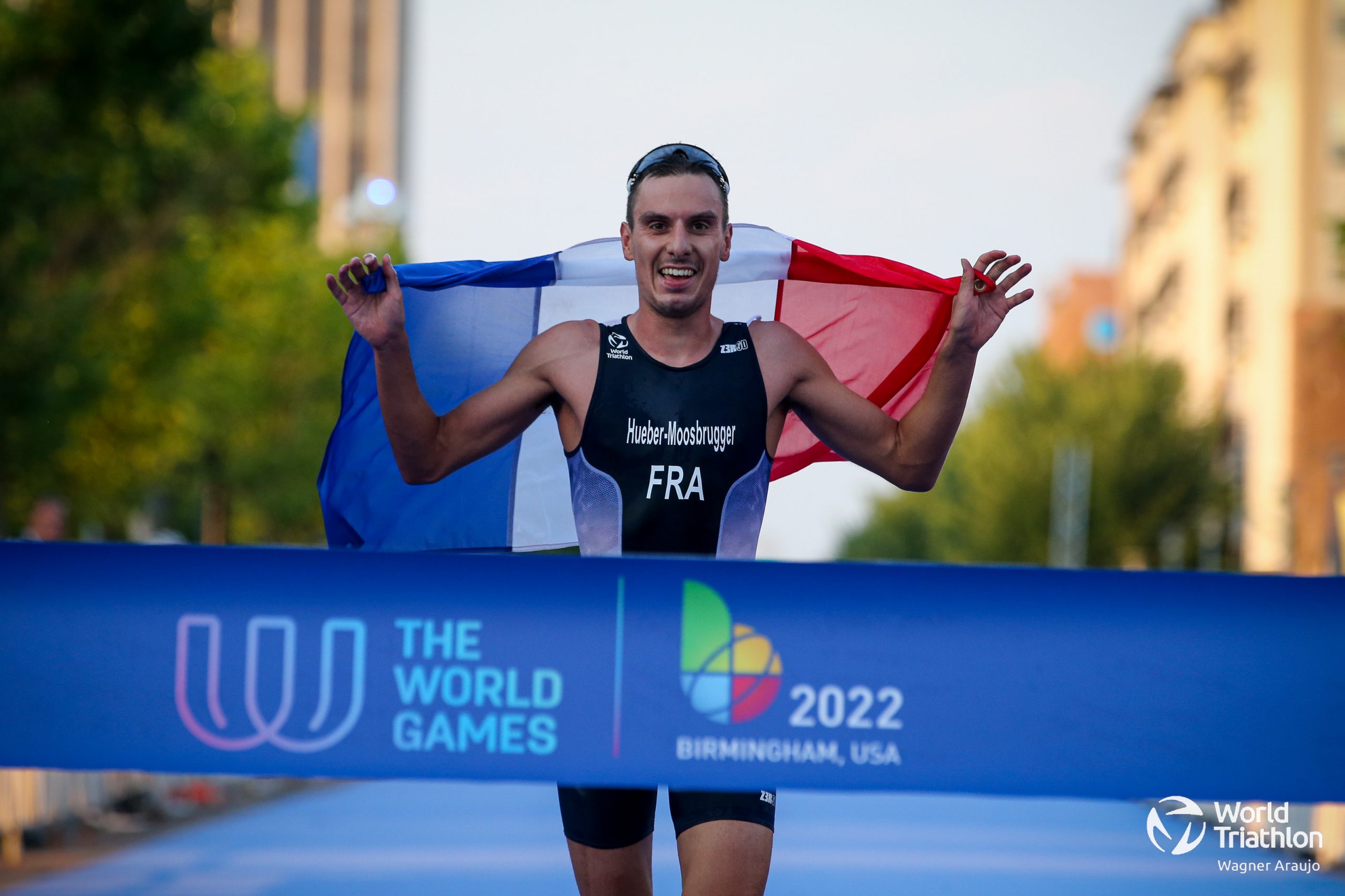 The evening in Birmingham, Alabama, was one to remember for the French team, who showed again that they are one of the most powerful nations in Duathlon by claiming gold and silver in the Men’s individual race of the 2022 World Games Duathlon. Born in 1996, Maxime Hueber-Moosbrugger was the first one to cross the finish line to get the best result of his career so far, while his teammate Benjamin Choquert, repeated the second place he got a month ago at Targu Mures World Championships. The bronze medal was for Mexico’s Victor Emmanuel Zambrano Gonzalez, whose fast splits in both runs were enough to get him on his first-ever major Games podium.

The men’s elite race of the Birmingham World Games Duathlon started with a slight delay and with again hot and humid conditions, even though the temperatures were not high enough to have to shorten the race to a sprint distance one. Twenty-nine men were ready for a flat 10km run along the Railroad park, followed by a 40km bike course again flat and technical through Birmingham’s most emblematic streets, to finish with a 5km run that will crown the World Games Duathlon winners. And as soon as the gun went off, it was clear that the French athletes -Hueber-Moosbrugger, Choquert and Nathan Guerbeur– and the three Belgian athletes –Angelo Vandecasteele, Arnaud Dely and Vincent Bierinckx– were in control of the race.

The six of them formed almost immediately a big pack, with only two other athletes able to follow them: Mexico’s Zambrano and Moussa Karich, from Bahrein. The leading group was fast during the first two laps, trying to drop athletes before they got on their bikes, and by the time the athletes were halfway through the first run, they already had a gap of more than 30 seconds with the chase group, and over three minutes with the athletes running in 15th place.

With one lap of the run to go, it was the youngest athlete, Zambrano, who decided to make his move and test the legs of the French and Belgian teams, only Choquert able to follow him. When the Mexican hit transition, Choquert was 5 seconds behind, and the remaining leading group another 13 seconds further back. Behind them, the group stretched more and more, with the athletes from hot and humid countries like Morocco –Nabil Kouzkouz– or UAE –Saud Alzaabi– proving that they know what it is to compete under such circumstances and managing to stay in the chase group.

It only took the Frenchmen and Belgians a few kilometers on the bike to catch the Mexican, though, and from that moment, the group of eight men started a technical and tactical 40km bike ride to try to save some energy for the final run. With Karich out of the race due to a mechanical problem, the remaining laps were not complicated for the leading group until just a few kilometers before hitting the second transition, Guerbeur tried his luck and tried to break away, opening a few seconds between him and the last athlete of the leading group, Zambrano.

By the time they all hit the blue carpet for the second transition, they knew that all would be decided in the final 5km run. And it was Hueber-Moosbrugger who hit first, leading the athletes out of transition while Choquert kept his calm despite leaving transition last, and started to chase right away. Same did Zambrano, who by the time they were entering the last lap, he had chased all the Belgian athletes and was running in third place, Hueber-Moosbrugger and Choquert flying in first and second and impossible to track at that point.

With the finish arch in sight, it was Hueber-Moosbrugger who crossed the line first, all smiles with the best result of his career, after the bronze he got in the 2022 World Championships and the silver in the 2021 World champs. “We came here (the French team) as a team, willing to work together. We knew that the Belgians had a very strong team as well, so we tried to work together to win gold and maybe have more Frenchmen on the podium. With this heat we knew it would be difficult but we have prepared a lot for this race. I tried my chances and it did pay off. I managed to stay ahead of my teammate, Benjamin (Choquert), who is very fast in the second run. I am so happy with my results today”, said the Frenchman.

Silver was for another man that knows what it is to be on podiums at Duathlon races, Benjamin Choquert. Silver medallist in Targu Mures 2022, three-times winner of the European Duathlon Championships and world champion in 2019, he was pleased with the silver. “I tried to save some legs during the bike course and I started the last run a bit behind the leaders so I had to chase and go hard and fast at the begining of the second run, and by the time I got everyone else Maxime was just too far ahead. But I am extremely happy for him and for the French team and how we performed today”, he explained.

Bronze medal was for Zambrano, whose best result before was a bronze medal at the 2021 U23 Duathlon World Championships. “The race was extremely hard because of the heat, I had cramps and thought I would not be able to make it, but I did, I am just so happy with my result today”, said Zambrano.

The three Belgians, Vandecasteele, Dely and Bierinckx, crossed the finish line in fourth, 5th and 6th place in that order, with the third Frenchman, Guerbeur, finishing in the 7th place and Australia’s Samuel Mileham closing the top 8. 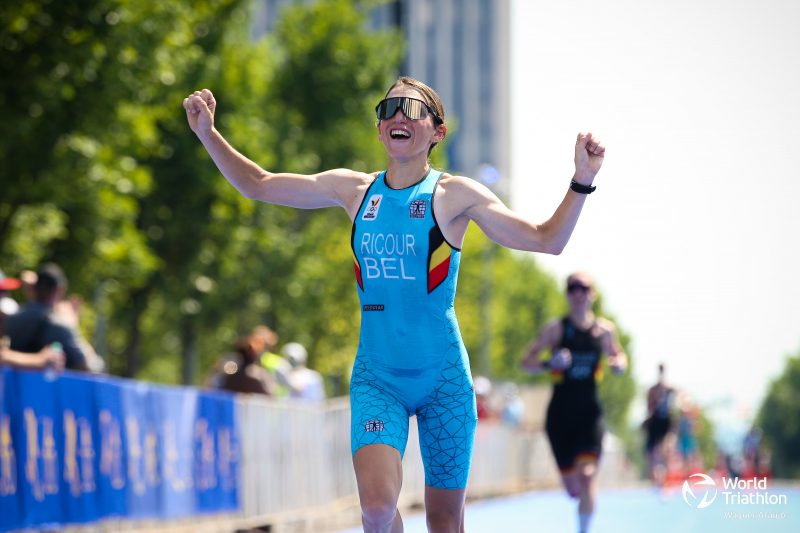 It was a career-best performance for Belgium’s Maurine Ricour, who claimed in Birmingham, USA, the Duathlon World Games title after a powerful second run who put her in the first position of a controversial race that finished with 12 athletes being disqualified for cutting the bike course. Along with her on the podium were 2013 Cali World Games winner, Ai Ueda (JPN), while the bronze medal was for the current Duathlon World Champion Joselyn Daniely Brea Abreu (VEN).

Twenty four athletes lined up in downtown Birmingham, Alabama, on a hot and humid morning ready for the 10km run, 40km bike course and a final 5km run on a course quite flat, but with so many turns and laps that ended up being a trap for many athletes.

Wearing number one at the start was Joselyn Brea Abreu, current world champion after a clear victory in Targu Mures a month ago, and looking for extended her dominance over the duathlon a bit further. She took the lead of the race as soon as she heard the gun, with her younger sister Edymar Daniely Brea Abreu right on her shoulder. Along with the Venezuelan duo went some other great names of the Duathlon speciality, like Ai Ueda, Marion Legrand (FRA), Sandrina Illes (AUT) and Mexican’s Luisa Daniela Baca Vargas and Guadalupe Jazmin Aguilar Corona.

As soon as they entered the Railroad park for the first time, they started dropping athletes that lap by lap was stretched to a long tale, with the kilometers on the legs and the heat impacting in the race from the early stages. By the time the athletes finished the 10km to start the bike course, one of them had been already lapped, Diana Gal (ROU).

The leading group of six including Ueda, both Breu Abrea sisters, Legrand, Illes and Ann Schoot Uiterkamp (NED) had an easy transition to start the first of the six bike laps, each of them with 19 sharp turns, and opened more than a minute advantage with the group of chasers, that included some fast runners like Merle Brunnée (GER), Lotte Claes (BEL) or Garance Blaut (FRA). And it was on the second lap in one of those turns, with the leading athletes not on sight for the chasers, when chaos started. The chasing group got lost and suddenly, by the next time the athletes passed through transition, the five initial leaders -Joselyn Brea, Ueda, Ricour, Legrand and Illes- were the second group, 30 seconds behind a large group of 9 athletes.

Both the leaders and the chasers managed to stay focused despite coaches, media and spectators’ confusion, and while the officials were deciding what had happened.

By the time the athletes hit transition for the second time, it was clear that many athletes would be disqualified for cutting out the bike course, so it was a matter of trying to see what was their real position on the race. The last 5km run was just a masterclass of running under extreme circumstances for Ricour. The Belgian had the extra gear on her legs enough to breach the gap with the leading group out of the bike and with a split of 17.33 crossed the finish line in second place, only behind Blaut, who crossed in first place but was one of the disqualified athletes.

“Normally I’m not really fast in the last transition, but this time everything went really well. I felt the legs were going great, I had good feelings, and I was just thinking stay running, keep pushing, so I just continued. Usually Ai (Ueda) and Joselyn (Brea) are faster than me but today I was the fastest one, so I am really happy”, said the champion.

“During the first lap of the bike, we (the chasing group) got lost. We were over one minute behind and then we were in front so we must have taken a wrong turn” explained Blaut.

Fifth in the finish line, but second taking out all the disqualified athletes, was Japan’s Ueda, with another consistent performance after her bronze medal in the Duathlon World Championships this year and the silver medal in Aviles in 2021. “I am very happy with my performance. This was a very technical bike course so it took me a while to learn the course and manage all the turns, but I am really happy with the result”, said Ueda, who is really looking forward to compete again on Sunday on the 2×2 Mixed Relay.

The bronze medal was for an exhausted Brea, who had to fight to keep Frenchwoman Legrand behind her. “I was just too tired after the bike so I had not enough on my legs to push in the final run, but still managed to get the bronce medal today. Is a medal that is really important for my country, so for me it is like a gold one”, said bronze medallist Brea, who is flying tomorrow early morning to Eugene (Oregon, EEUU), to represent her country in the World Athletics Championships.

Some of the disqualified athletes appealed to the Competition Jury after the race, but the appeal was dismissed.