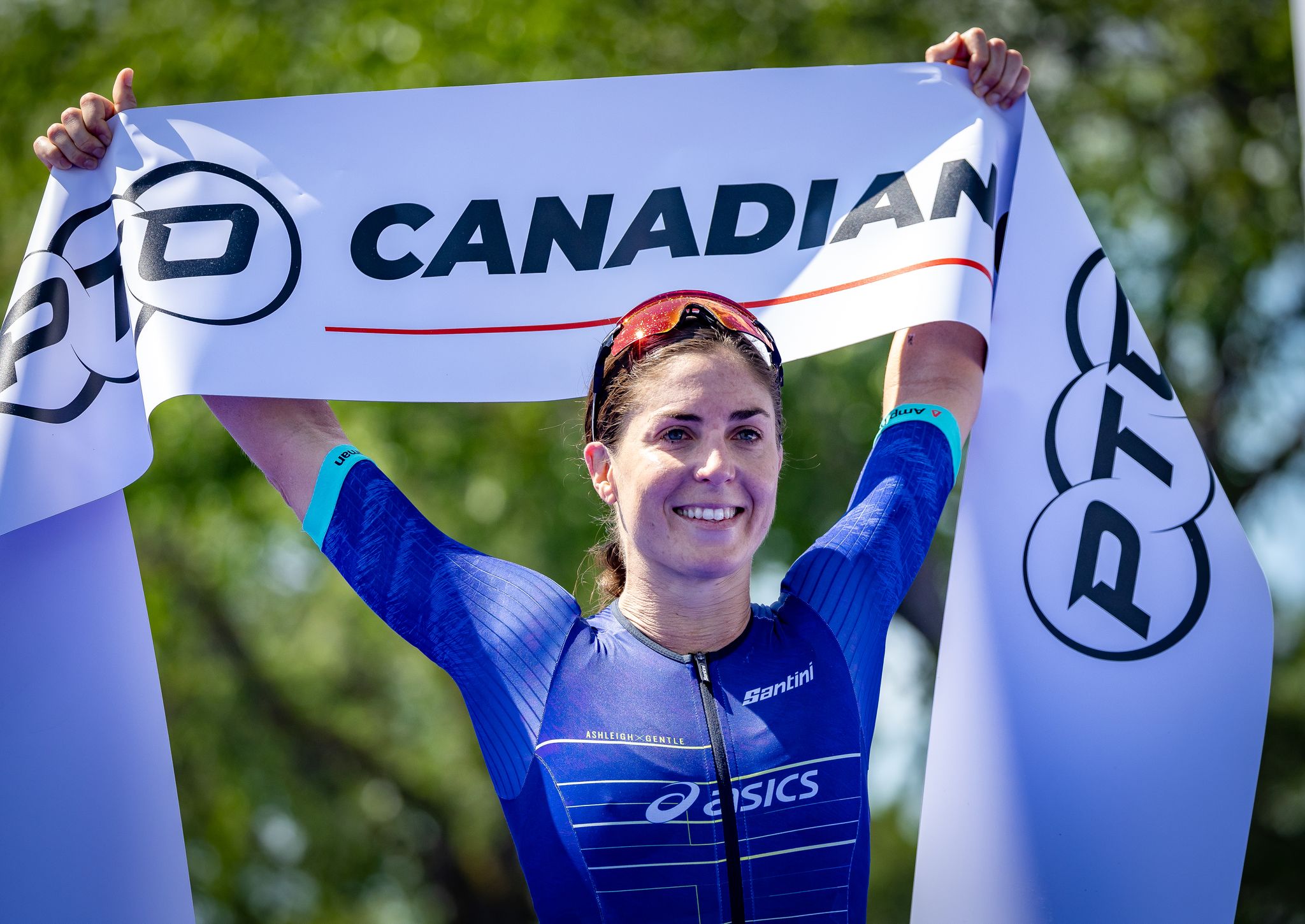 “I just had the most amazing day today. It hasn’t been the easiest two or three years and I’m just grateful for all of the people that kept believing in me. I’m really proud of myself,” said Gentle, who beat Canadian Paula Findlay into second place in front of her home crowd.

Gentle went on to say “I didn’t start the sport of triathlon because of money but I have bills to pay, I’m an adult and the opportunity that the PTO has given us here is one I’m incredibly grateful for” having won the $100,000 USD first prize.

Prior to winning today, Gentle was PTO World #17. This ranking will inevitably improve and is practically guaranteed an automatic qualification spot on Team International for The Collins Cup next month in Slovakia (20 August, 2022).

Gentle’s ​​fiancé, and fellow professional triathlete, Josh Ambereger, had promised that if Gentle won this race he would be taking her on “one hell of a honeymoon”.  Gentle now has that to look forward to as the icing on the cake after an incredible day on course.

Edmonton’s own Paula Findlay came second to take home $70,000. “Honestly racing at home I was more nervous than I’ve ever been, more nervous than the Olympics or anything because I had all this support behind me and I didn’t want to disappoint anyone,” said Findlay.

“I knew I was fit, I knew I was healthy but you never know what’s going to happen on the day… of course I wanted to win, but there couldn’t be a more deserving champion. Ash is such a classy runner and I’m just so happy I could hold on for second.

“Seeing all my family and friends on the course and my mom – putting this race on and how much work she’s done just to get all this together – is amazing. So thanks to Do North for setting this up and just having a safe race, PTO for putting this on – it’s such an honour to race at home and I had the most fun ever.”

Third-place-getter Chelsea Sodaro, who won $50,000, was surprised to make the podium. “For context, I have really struggled with my mental health, actually, since having my daughter 16 months ago,” said Sodaro. “I keep on thinking, ‘I’m good!’ and then I have these little moments where I realise I am human and it’s still something that I need to work on.

It was Sodaro’s run that really made the difference today. “This is the first time honestly I have felt like myself since giving birth while running. I used to be a pretty good runner and I just think it’s finally coming back so I am truly shocked that I am on the podium today… I hope that I made my little baby super proud today.”

Speaking about her motherhood and the PTO Maternity Policy, Sodaro added: “I found out about the maternity policy when I was five or six months pregnant… it actually made me quite emotional because it’s 2022 but we still have so far to go in the way that we support women.”

“But this initiative – it says that the PTO cares about women, it cares about female athletes, it cares about keeping us in the sport and seeing us through all the phases of our athletic career… Women peak in our mid to late 30s in this long stuff and so we need the opportunity to be able to stay in the sport and we shouldn’t have to choose between being world-class athletes and being moms – we can do both, we just need some support.”

How The Race Played Out

Continuing to push the swim hard, Lopes had a significant lead but accidentally cut one of the swim buoys meaning she incurred a 30 second penalty. Even so, the Brazilian had clear water behind her and headed onto the bike and out of transition in pole position after a 27:26 swim.

By the end of lap one on the bike, Paula Findlay (PTO World #10) had moved from 10th to second with Lopes in sight. Findlay, recent winner of the Canadian National Time Trial Championships, was soon leading and pushing hard to distance all competitors.

With 40km done, Findlay came through transition with a smile, her lead was 1:06 to Gentle, Ellie Salthouse (PTO World #23), Nicola Spirig (PTO World #15) and Lopes. Further back, PTO World #8 Emma Pallant-Browne, a pre-race favourite, was forced out of the race with a front flat tyre. Meanwhile, Jocelyn McCauley (PTO World #21) was riding alone 2:08 back with Laura Philipp (PTO World #3) at 2:40 behind Findlay.

By the end of lap three, Findlay was enjoying a lead of 1:34 to the same pack of chasers, McCauley and Philipp losing a few more seconds. As she returned to a cheering crowd at the end of the 80km bike course, the Canadian’s buffer was up to two minutes over Jocelyn McCauley, who bossed the bike to reach T2 in second.

Over the four-lap 18km run, Findlay held a strong pace but Ashleigh Gentle – in second by 1.3km – was the fastest mover on the course. While Findlay wasn’t slowing, Gentle was on a flyer catching Findlay around 7km in.

Behind, Laura Philipp was up into third place but looked to be working hard. Meanwhile Chelsea Sodaro (PTO World #20), 10th off the bike, was ripping through the field and came right up to Philipp’s shoulder by 14km in.

Gentle, looking imperious, continued to drive her advantage, coming home in 3:30:53 with a 1:03:17 run – the day’s fastest – to become the inaugural PTO Canadian Open Champion and claim the $100,000 first-place prize purse.

Feeding off the home crowd, Findlay finished second in 3:33:16, high-fiving the roaring fans to secure second place and take $70,000 – far more than the win in virtually any other race.

In the final 500m, Sodaro put her track-running background to great effect in breaking away from Philipp to take the final podium spot in 3:34:56 and a cheque for $50,000.

Philipp finished fourth to earn $40,000 while short-course star Julie Derron came fifth – throwing her hat in the ring for a Team Europe Captains’ Pick at the Collins Cup and taking away $35,000.