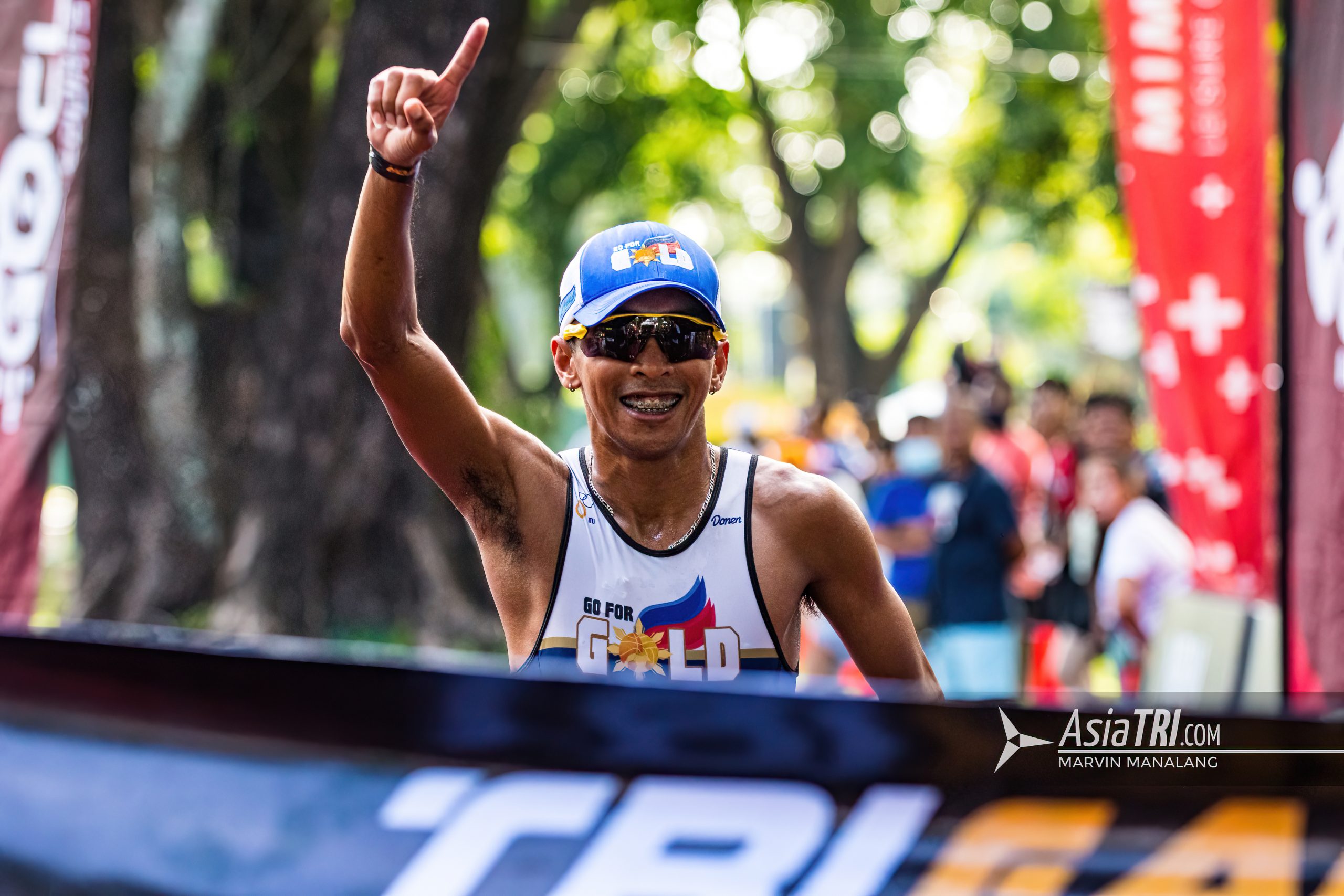 Over 400 duathletes joined the 2nd TriFactor race in Asia this season, and is the 2nd leg of Clark’s Duathlete of the year Race Series.

“It was an exciting elite race, with nearly 20 of the best duathletes in the country competing for the elite honors.   Congratulations to Rambo and Kim for once again separating and stamping their own level from the field, said Jumbo Tayag, GoClark Sports race director.” 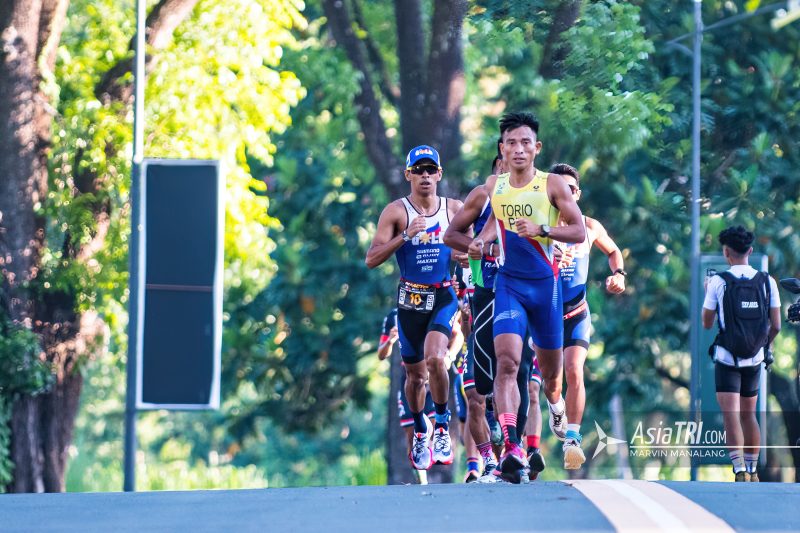 John Chicano, a double Gold medalist in the 2019 Southeast Asian Games, led wire to wire in the race.   His splits of 17:49, 1:01:24 and 37:00 are all race best in the inverse standard duathlon format of 5k run-40km bike and 10k run.   Chicano and his training partner Raymund Torio pulled away from the pack in the 2nd lap of the 1st run, which enabled them to work together on the 40km bike leg.  Chicano entered transition 2 with Torio in tow.   Chicano dropped Torio in the midway point of the final 10km run, winning in 1:56:12, a 1 minute and 13 second winning margin over Torio.   Efraim Iñigo was able to secure third place with the strength of his 40:13 run split, the best among the chase pack of seven. 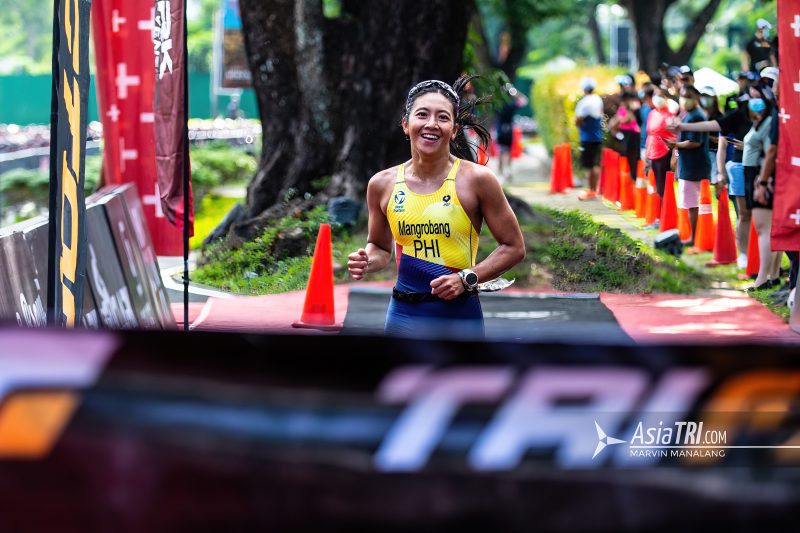 Vietnam Southeast Asian Games double-gold medalist Kim Mangrobang was a class of her own in a small elite field in the women’s category, dominating the race from get-go with women’s best run splits of 20:13 (5km) and 41:15 (10km) with a winning time of 2:09:14..  Mangrobang, who also topped the National Duathlon Trials here in Clark last December, won with a 12 minutes and 18 second margin over runner-up Mary Joy Trupa.   Julie Mae Jaylo completed podium spots by finishing 3rd place in 2:41:20.

Clark Duathlon Classic elite champion Rhia Stawicki biked the women’s 40km split at 1:07:28 but was disqualified due to a wrong turn in the 2nd run.

With their wins, Chicano and Mangrobang cracked the leaderboard of the  Clark Duathlete of the Year Race Points Series. After the 2nd Leg (Clark Duathlon Classic and TriFactor Philippines Duathlon), John Chicano is now the leader in a tight group in the men’s race.

Mary Joy Trupa of Team Go for Gold is now the surprise leader in the women’s race of Race Series with 13 points.  Mangrobang is second place after grabbing the full 10 points in this race.   Rhia Stawicki sits at 3rd with 8 points. 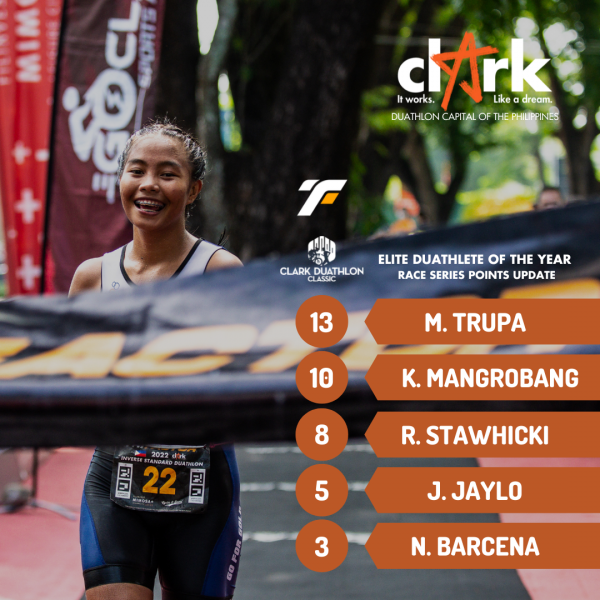 The TriFactor Philippines Duathlon is part of the 4-Race Points Series by GoClark Sportsand Events. The final two races are New Clark City Duathlon (July 17) and Titan 77.7 Philippines (September 11). The race series will determine the Elite Duathlete of the Year.

Age Group winners in the Standard Distance Category are:

Age Group winners in the sprint category are:

The 2022 TriFactor Philippines Duathlon is presented by Cycles and Brew and supported by Clark Development Corporation, Filinvest-Mimosa+,  Garmin Phiilippines, SYLBS Performance Wear and Velogicfit. For more on races by GoClark Sports and Events, visit GoClark.PH