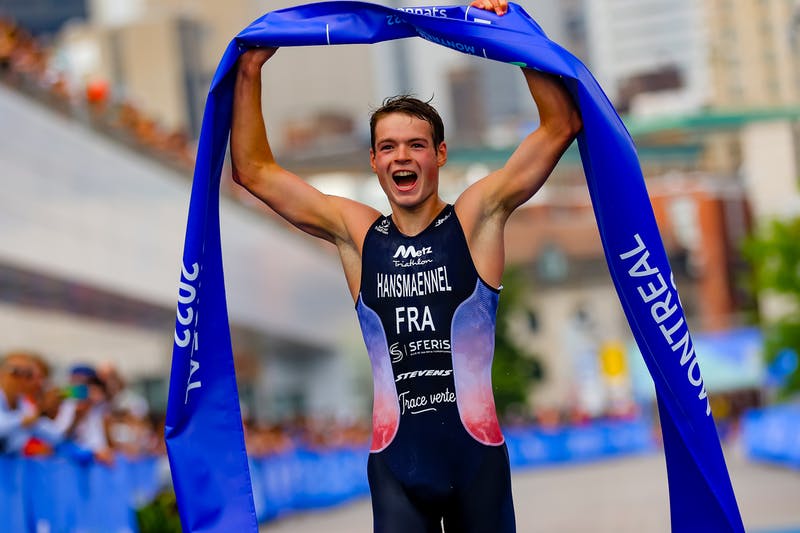 After a format change to duathlon due to bad weather affecting the water quality, the intensity was cranked up on Friday morning for the start of the men’s Junior World Championship race in Montreal.

The leaders chopped and changed in what looked like being an unpredictable chase for the title, until Thomas Hansmaennel put the hammer down after just a few hundred metres of the final 5km to pull clear. With nobody able to respond, Hansmaennel carved out a huge gap behind him, and was able to soak up the moment down the final stretch of blue carpet, finishing 18 seconds ahead of Toby Powers (AUS) in second, Reese Vannerson (USA) with the bronze.

“I wasn’t able to race the European Championships so this feels like the perfect result,” said Hansmaennel. “I wasn’t disappointed at the switch to duathlon, and was just looking to save some legs at the end of the bike so I could go all out on that final run, and it worked.”

—
Canada’s Mathis Beaulieu was putting the early pressure on race number one and the 2021 silver medallist Joao Nuno Batista (POR), who was right there with him and another Australian talent Peyton Craig.

Five seconds separated the top 20 heading into T1 and out onto the 4-lap, 20km bike, through which Niels Van Lanen (NED) was up front asking the questions of those behind coming through transition at the halfway point, just as he had in Quarteira last year.

Hansmaennel was pushing the pace along with compatriots Leo Fernandez and Pablo Isotton, but it was a big pack of 35 athletes, those at the back having to work hard at each 90-degree turn to close the gaps that kept forming to those driving things out front.

There was one more small break over the final lap from Fabian Schonke (GER) and Van Lanen but it came to no more than useful clear road heading in to transition.

Luke Anthony (USA) was into the lead over the opening 300m but Hansmaennel clearly had a plan, immediately going on the attack and extending a commanding lead over the chasers.

Vannerson and Powers were eventually able to drop Isotton, David Lang (LUX) and Peyton Craig not letting the elastic go but unable to reel in those ahead, before Powers found an extra gear to assure him the silver ahead of the American, Isotton and Lang in 4th and 5th respectively, but there was no doubt that the race belonged to the French World Champion Thomas Hansmaennel.

Following up on her world championship silver in Quarteira last year, Sweden’s Tilda Mansson powered to the gold in Montreal on Friday morning, pulling away from Jule Behrens over the last run lap to take the tape and the 2022 world title.

The format had been changed to duathlon after heavy rains in the preceding days affected the water course, and the previous year’s top two were soon locked in battle across the run-bike-run, eventually leaving the rest of the field trailing, Livia Gross of Switzerland was able to win the challenge for bronze.

“I would have liked to have the triathlon, that’s what I came here for, but it’s the same for everyone,” said a delighted Mansson. “I was very nervous today, I don’t know why, but I think I handled it well. On the second lap I just wanted to go, I heard the gap was getting longer and just thought, don’t stop! My mother’s here and she supports me, and my brother who is my coach, so I’m very grateful to him too.”

—
The start line changed to the edge of transition, the women lined up four-deep and it was Mansson, Bherens and Myral Greco (ITA) who were straight to the front. It wasn’t long before the field had started to string out, Brazil’s Julia Munhoz sadly ending her race early with an injury in the very first lap.

Clara Normand (CAN) and Faith Dasso (USA) were among the names in the middle of the pack, Marcela Alvarez Solis (MEX) spearheading the athletes back to the blue carpet before looping round the hairpin to transition for the first time.

It was Solis out first with Greco and Ilona Hadoum (FRA), Mansson and Noemie Beaulieu (CAN) just five seconds behind. Elena Viejo Campos (ESP) was also well set as a pack of nine cyclists formed out front on the first of four laps.

Manon Laporte (FRA) was among those driving the train forward as 16 athletes came together, Bethany Cook (GBR) and Felipa Hermann (GER) also going well at the halfway point,

Behrens from Laporte and Greco after lap one on the bike but 19 in the group now slicing through the tight and technical bike course.

Through transition for the final time, Beaulieu gave the crowds plenty to cheer as she was out first onto the run, Julia Brocker on her shoulder. But just a few metres back it was Mansson and Behrens already planning their move, and it wasn’t long before the duo had hit the front, the German sat right on the Swede’s shoulder for the first 2.5km.

The lead to Beaulieu, Brocker and Gross was 25 seconds at the bell, and as that gap grew, so Gross was able to pull clear in third. Meanwhile out front, it was Mansson who was able to afford herself a big grin as she looked over her shoulder one final time to see the gap now hitting 10 seconds to her nearest rival, and the world title was all hers. Beaulieu finished with fourth for Canada, Luna De Bruin (NED) running her way into fifth.

Winner of the Free Entry to Ironman Western Australia (Full) Announced
May 2, 2017