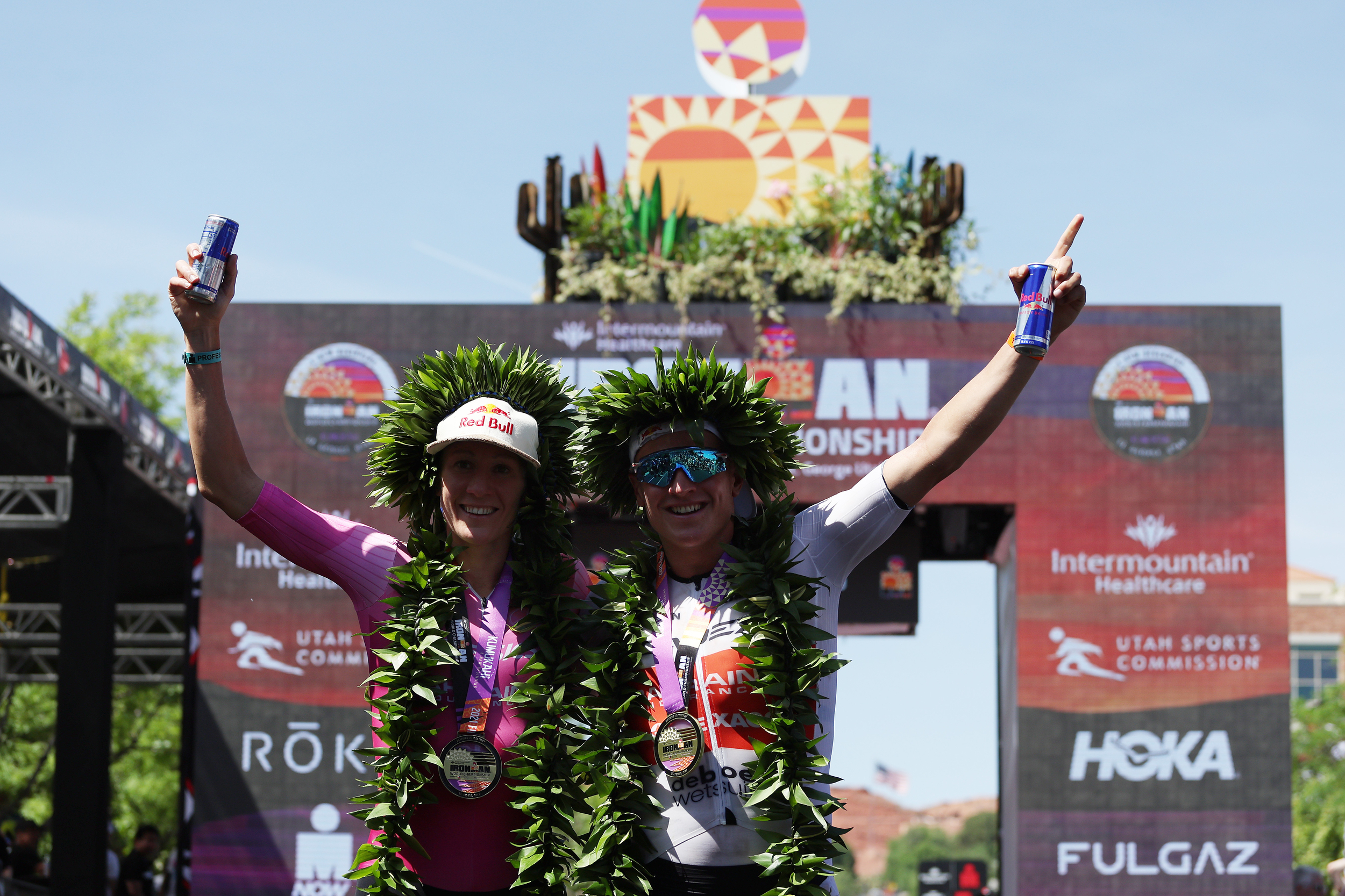 Following a two-year hiatus, the IRONMAN World Championship returned with the 2021 Intermountain Healthcare IRONMAN® World Championship presented by Utah Sports Commission. The 2021 edition of the event took place in St. George, Utah becoming the first location to host the event outside of Hawai`i since its origins in 1978. The Land of Endurance lived up to its billing with Kristian Blummenfelt (NOR) and Daniela Ryf (CHE) being crowned as World Champions after what many are calling the toughest course they have ever raced. The race was featured live on IRONMAN Now channels and Peacock, NBCUniversal’s streaming service. The full broadcast of today’s race can be viewed on Facebook Watch via the IRONMAN Now channel here.

More than 2,800 athletes started the days race including the impressive professional field. The 2021 Intermountain Healthcare IRONMAN World Championship presented by Utah Sports Commission kicked off with a 2.4-mile (3.86km) ROKA Swim Course, taking place in Sand Hollow Reservoir. Followed by a challenging 112-mile (180.2km) FulGaz Bike Course that led athletes through stunning desert landscapes with 7,374 feet (2,248 meters) of elevation gain and an unforgettable climb through the Snow Canyon State Park at the 100-mile mark. The 26.2-mile (42.2km) HOKA Run Course will led athletes on two loops through St. George with 1,413 ft (431m) of climbing before culminating in an unforgettable finish line experience in the heart of downtown St. George.

Blummenfelt earns coveted title
In the men’s race, Sam Laidlow (FRA) led the pro men out of chilly Sand Hollow Reservoir waters (64 degrees Fahrenheit) in 47:29 with Daniel Baekkegard (DEN) on his heels. The Kiwi pair Kyle Smith and Braden Currie were next with Florian Angert (FRA) in fifth. Olympic gold medalist Kristian Blummenfelt fell a surprising two minutes back on the swim.

Onto the 112-mile bike course through the hilly territory of Southwestern Utah, a lead pack established itself early on with Laidlow (who trains with three-time IRONMAN World Champion Jan Frodeno) Smith, Bakkegaard, Angert, and Currie. Five minutes back of the lead group, Cameron Wurf led a chase pack that saw Canadian Lionel Sanders move up through the field as well as Blummenfelt with the three coming into the second transition 4:30 behind the leaders.

On a picture-perfect day featuring warm, dry conditions, typical of the desert and a wind factor that never made a significant impact on the pro performances, Smith, Currie, and Angert were out onto the run course in the top three. Currie took the lead at 4 miles, as Blummenfelt, one of the day’s biggest movers on the run, continued to move through the field behind him. The Olympic gold medalist, who started the run with over a four-minute deficit, started to make a dent in the leaders around the seven-mile mark. By the halfway point of the marathon, Blummenfelt had moved into second, entering a battle with Currie. At 19 miles, the Norwegian took the lead and never looked back claiming his first IRONMAN World Championship to add to his Olympic Gold Medal.

It was a breakthrough performance for Christchurch-born Currie, 2021 IRONMAN New Zealand champion, who tried to hold onto second but was passed by Sanders in the last few hundred meters. While some predicted that Sanders, who thrives on these types of battles, wouldn’t have enough run real estate to pass Currie but he proved the pundits wrong and surged into second within view of the finish line.

Blummenfelt won the race handily with his 7:49:16 finish, joining the rare collection of athletes who have earned both an Olympic Gold Medal in triathlon and an IRONMAN World Championship win. For the young Norwegian it’s of its an incredible feat for only his second-ever full-distance IRONMAN race.

Sanders reveled in his second silver medal performance after also finishing second in Hawai`i back in 2017. “That was an amazing battle. It’s something I’ll never forget,” he said at the finish line. “I didn’t take anything for granted—this race my only goal was to execute my absolute best performance in the swim, the bike, and the run.”

Currie, a seasoned racer and past top-10 IRONMAN World Championship finisher reflected on the race at the finish line: “We had a fantastic group on the bike, it was so honest, consistent, and settled. I’m well-cooked, but stoked.” When all was said and done, the top five male finishers all clocked under 8 hours despite the difficult course.

Ryf returns to glory
In the women’s race, American Haley Chura was first out of the water with over two minutes on the rest of the field. Fenella Langridge (GBR) and Lisa Norden (SWE) were next in line, with Daniela Ryf (CHE) leading a chase group four minutes back containing Skye Moench (USA), Jocelyn McCauley (USA), and Anne Haug (DEU).

Norden took over the lead early on the bike, with Ryf, Kat Matthews (GBR), and Moench also asserting themselves. By the 40-mile point, Ryf had confidently taken the lead, passing Norden and eventually Matthews. The Swiss athlete and Matthews would go on to lead the rest of the bike together as the rest of the field fell scattered behind them.

By the halfway point of the bike, the four-time IRONMAN World Champion made a characteristically bold move, pushing to the front and continuing to make up time at the front—to the tune of seven minutes ahead of her next-closest chaser, Matthews, and 15 minutes on super-runner and reigning IRONMAN World Champion, Haug.

Over the 26.2-mile hilly marathon, Ryf continued to run away from the rest of the field to the tune of “comeback race” and “the return of the Angry Bird” from commentators and fans. She crossed the finish line in 8:34:69 (including a sub-three-hour marathon) with a display of joy and passion uncharacteristic of the levelheaded athlete. Ryf flashed the number five to signify her five IRONMAN World Championship victories, putting her in the esteemed company of only Paula Newby-Fraser and Natascha Badmann.

“Two and a half years’ wait and I’m so happy,” Ryf reflected at the finish line. “To come to this finish, with this crowd, after a really hard last few months I’m just so stoked to bring it together today. I had fun today, and that’s really important.”

Matthews, who won two IRONMAN races last year but is a newcomer to this championship event, hung on for second with an 8:43:49 finish time. Though she was unable to challenge Ryf’s dominance, the 31-year-old put in a few strong surges and fought hard to hold onto her position.

“I cannot understand how my brain and body were able to push like that,” she said at the finish line. “My first world champs to come second to Daniela Ryf? I’m happy. Honestly, I think I paced it perfectly.”

Haug gave it all she had and rounded out the podium in third on the heels of consistent performances across all three disciplines and her crowning glory: a race-best run of 2:56:00.

TriFactor World Championship 2022 to be held in Maldives