Iden and Perez Sala Crowned Champions of The Championship 2022 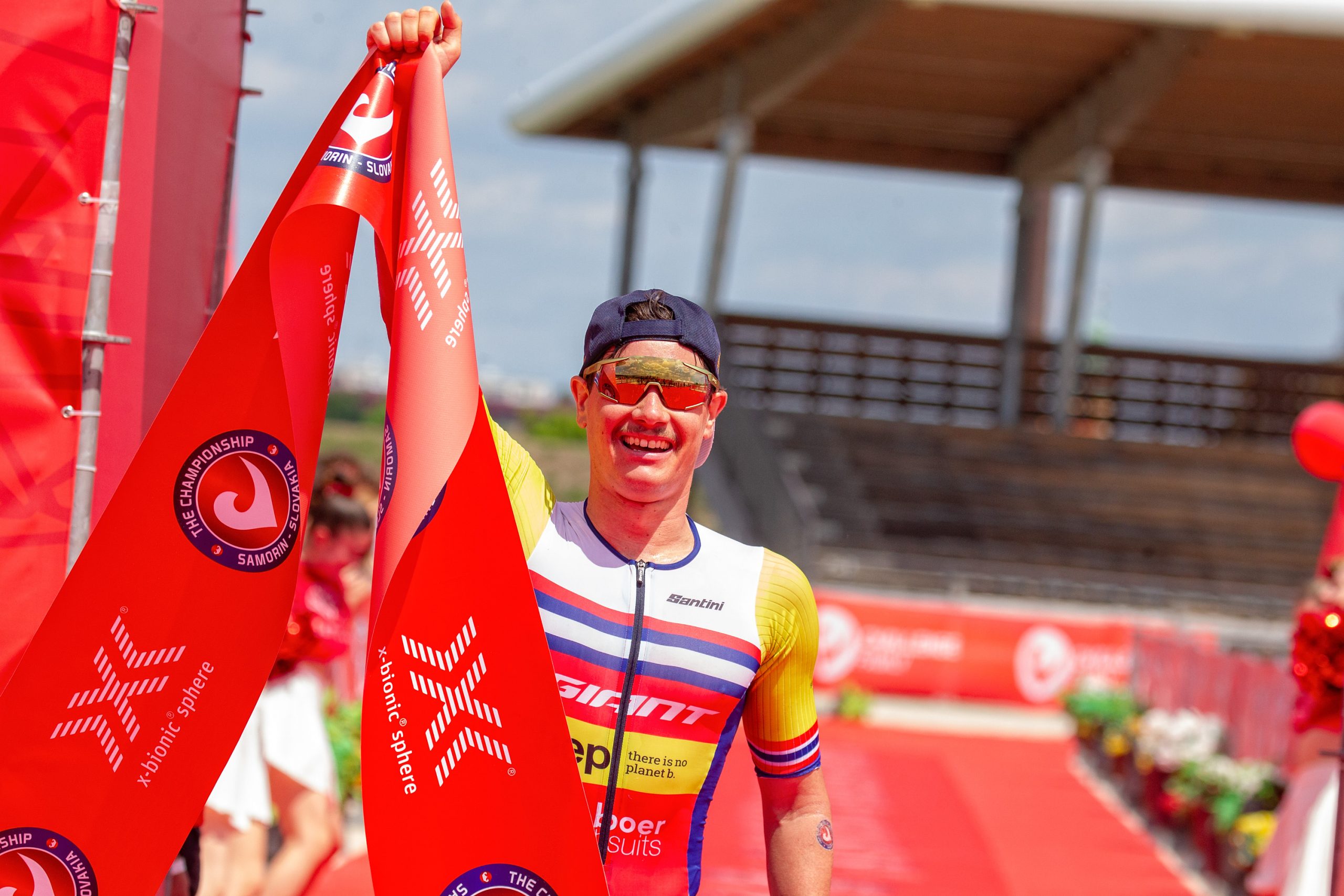 An incredible day of racing at The Championship saw Gustav Iden (NOR) and Sara Perez Sala (ESP) crowned the Champions of The Championship 2022 on a day that tested with strong winds and warm temperatures alongside a highly competitive field.

Before the race, Iden was quick to downplay his form following his disappointing withdrawal from St George early in the month but after a challenging swim and tough bike, he showed his true class in the run to take the win. The swim went pretty much according to plan with local hero, Richard Varga (SLK) coming out of the water first in 23:22 with Josh Amberger (AUS) hot on his heels, just 20 seconds down. A minute later, a large chase group exited the water containing both Pieter Heemeryck (BEL) and Miki Taagholt (DEN). While Varga held his lead for the first kilometres, Heemeryck and Taagholt soon joined him and together the three of them held off the chase pack for the rest of the bike with Heemeryck in the lead. Behind them, Iden had had trouble with his tyre in T1 but managed to make contact with the chase group that also included Thor Bendix Madsen (DEN), Thomas Steger (AUT) and Kyle Smith (NZL). Coming into T2, just 1:30 ahead, the leaders had a lot of work to do to hold off some of the sport’s strongest runners. And it didn’t take long for those runners to show their form. By halfway through the second lap, Iden had moved up into first, seemingly effortlessly, and there he stayed to take the win while Heemeryck paid the price as for his hard work on the bike, slipping down the field from first to ninth. Despite serving a 30 second penalty for a dismount line infringement, Varga managed to hold off Steger for second place in 3:45:05 to the delight of his Slovak supporters with Steger having to settle for third in 3:46:33. Not to be outdone, Taagholt and Smith thrilled the crowd with a sprint finish with Taagholt coming out top, crossing the line just one second ahead of Smith.

“I was struggling so much in the swim,” said Iden. “It was a sub-standard swim for me and then I had a low pressure tyre but luckily I quickly got a pump from the volunteers. I struggled to keep up the power at the start of the bike. But I slowly I got into it and at the end I got there – to take the win here is amazing! It’s really tough to run on the grass here but I think I was suffering less than others, it’s so demanding, but I think I managed OK!”.

The women’s race also went as expected in the swim with Lucy Buckingham (GBR) exiting the swim in 24:53 with Perez Sala just three seconds down. With the nearest chaser, Fenella Langridge (GBR) over 1:30 down, Buckingham and Perez Sala, rode together for the duration of the bike taking turns in the lead to ensure they put as much distance as possible between Langridge and Sarissa de Vries (NED), Emma Pallant-Browne (GBR) having been stung by a bee causing her to slow and lose touch with the chasers. At the end of the bike, Buckingham and Perez Sala had a 1:30 lead over Landridge and de Vries with Ashleigh Gentle (AUS), Pallant-Brown, Daniela Bleymehl (DEU) and Lucy Byram (GBR) over seven minutes behind. Out onto the run and Perez Sala quickly broke away from Buckingham and while Buckingham did catch her again on the third lap, she couldn’t maintain the pace and Perez Sala took the win of her career in 4:08:19. Meanwhile behind them, Pallant-Browne was systematically picking off runners, the last of whom was Buckingham on the final lap. She posted the fastest run split of the day of 1:17:19 and ran into second place in 4:10:12. Buckingham rounded out the podium in 4:11:05.

“Right now I feel really tired but is this is a dream, so I’m very happy,” said Perez Sala. “I think I did the best race ever. I swam well with Lucy and in the bike I felt really good and did my best power ever. In the run the first two laps I felt strong but the last lap – whoa, that was really hard and I was really tired and my legs really hurt so I was really happy to get to the end! At the end of the second lap I started thinking I have to run to keep ahead of Emma, I knew I wanted to win and I wanted to sprint. In the last two kms I knew I had it – it was a great day, it was amazing!”

Over 1,130 athletes from 42 nations took part at The Championship at the x-bionic sphere in Šamorin, Slovakia. For full results, visit challenge–family.live.

7 Tips for a Better Iron-Distance Taper