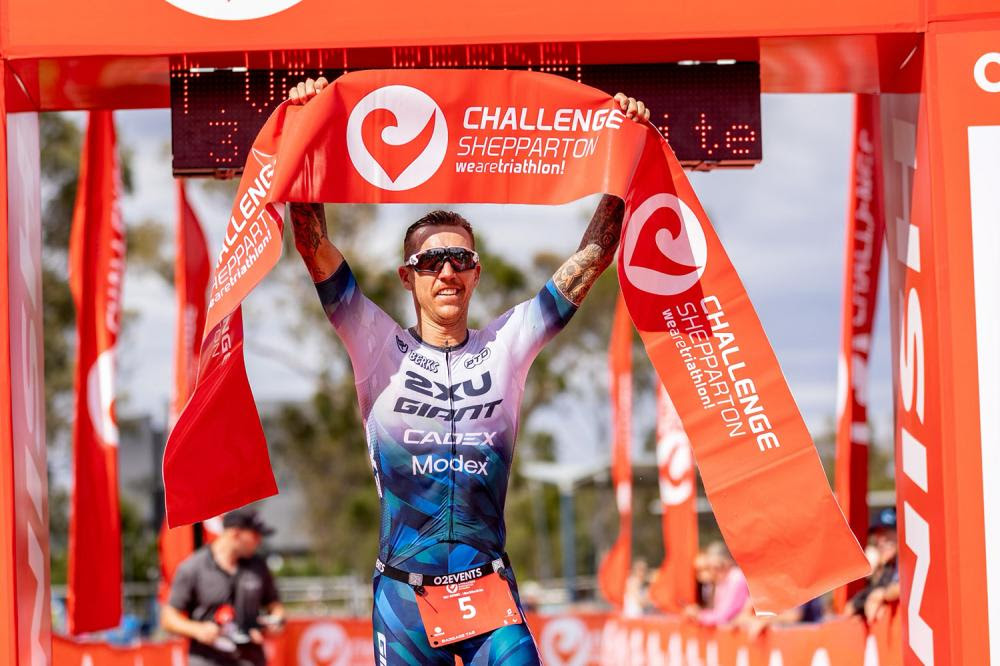 After a day of chasing, Amelia Watkinson took a thrilling win at Challenge Shepparton today in 4:08:38 while Tim van Berkel dominated from the half way point on the bike to take the men’s title in 3:46:19.

The day dawned with near perfect conditions for one of Australia’s most renowned open water swims and it was defending champion, Max Neumann who was first out of the water in 23:47. Out on the bike, Fraser Walsh quickly took the lead but Neumann stayed hot on his heels and van Berkel started playing catch up. By the halfway point the bike, van Berkel had the lead which is where he stayed, despite a brief challenge from Matt Burton who rode up into second and posted the fastest bike split of the day in 2:02:15. Heading out onto the run, van Berkel went from strength to strength, continually putting time into the chasers. Behind him, Burton was overtaken by Walsh at the 11km mark. Walsh went on to take the fastest run in 1:16:19 earning him second place and Neumann, who had come off the bike eight minutes down, ran a 1:17:47 into third place.

“Today started off pretty rough with a bad swim for me but I got out on the bike and really got to work and took the lead by the turn around,” said van Berkel. “On the run I was in survival mode, it was really tough but the support was amazing out there. It’s great to be back, this is where it all started for me, I did my first race here 15 years ago and it’s so good to be back!”

In the women’s race it seemed as though Lotte Wilms had it sewn up. She led out of the swim in 24:51, two minutes ahead of Grace Thek and Amelia Watkinson.  She maintained this lead throughout the 90km bike ahead of Watkinson with Thek, Penny Slater and Renee Kiley all jostling for third. Out on the run, any gains Watkinson made were eroded and it seemed the race was Wilms’. But in the final kms Wilms’ started to struggle while Watkinson, sensing opportunity, started to close the gap, finally overtaking Wilms just 200m before the finish line in a thrilling finish. Thek rounded out the podium in third place.

“I had settled on second to be honest,” said Watkinson. “Lotte had a pretty solid lead as usual out of the water. It’s a pretty honest bike out there and it was windy and on the run I guess I kept on pushing. Unfortunately, Lotte had a bit of a rough day at the end but it’s a competition so I made the most of it and pushed to the line in the final metres.”