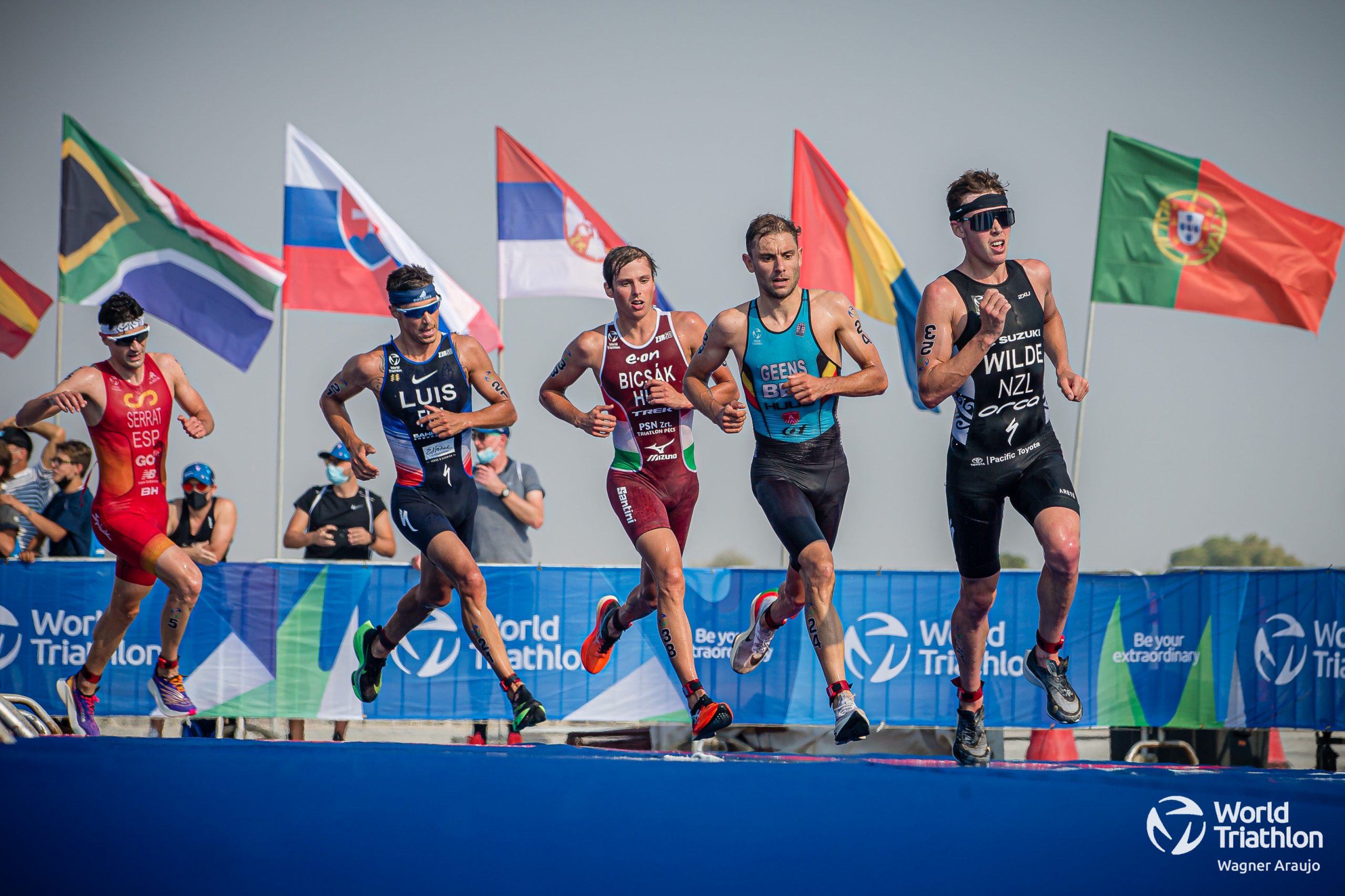 There is no better way to round up a bittersweet year than with a victory, and that is exactly what Jelle Geens accomplished this Friday in Abu Dhabi. After missing out the individual race of the Tokyo Olympics due to a positive Covid case, and breaking his wrist in Montreal, the Belgian returned to the World Triathlon circuit in style to win the 2021 World Triathlon Championship Series Abu Dhabi defeating his training partner Vincent Luis (FRA) in the last kilometre of the run. Young Hungarian Bence Bicsak crossed the finish line in third place to claim his second Series podium ever.

It was quite an unusual start for the Men’s race, with Germany’s Tim Hellwig wearing number one and with some of the favourites for the podium with quite high numbered bibs, after missing the first race of the season in Hamburg. That meant that Vincent Luis, Hayden Wilde (NZL), Jelle Geens or Tyler Mislawchuk (CAN), to name a few, were caught in the middle of the pontoon at Yas Marina Island. But it was just a matter of the first strokes that Luis managed to find some clear water ahead of him and led the 55 men during the 750m swim in the hot waters of Abu Dhabi, over 31ºC. Right at his feet Hungary’s Mark Devay, another excellent swimmer, who exited the water just a second behind the Frenchman.

The long ramp to transition was enough for Takumi Hojo (JPN), Kenji Nener (JPN), Miguel Hidalgo (BRA) and Pierre Le Corre (FRA) to catch up with them and leave the first transition with a bit of a gap, but with a large train of athletes behind them ready to make an statement from the beginning.

With a fast and technical bike course like the one set in the Formula 1 track, it was a matter of time to have the stronger bikers taking the lead of the group, with Hayden Wilde, Leo Bergere, Jelle Geens or Vasco Vilaca charging hard, but not enough to break up the group. It was enough, though, to start losing members on the big lead group with most of the big names in there, and almost40 seconds of difference with the chasers.

It was clear for all of them in the last laps of the bike that it all would be decided on the run, and with the extreme heat conditions they all tried to save as much energy as they could, knowing that the 5km run along the circuit could be brutal. Right after the second transition, it took only a few meters for Hayden Wilde to make a statement and start pushing hard, taking the lead of the small leading grup. The kiwi lost two flights to Abu Dhabi due to some issues with his passport and only arrived to UAE hours before the start, and was stung by a jellyfish while warming up for the race, and had to be treated by the medical personnel minutes before the start of the race.

But Wilde forgot that along with him were some of the best runners of the circuit. Luis, Geens, Antonio Serrat Seoane (ESP) and Bence Bicsak saw the kiwi going for it and decided that it was too early. by the time they started the second and last lap, Wilde was slowly fading, the heat and the stress of the last hours making an impact, and it was then when Luis and Geens decided to go for it. Both of them run shoulder to shoulder trying to keep it cool until the last meters, but with one kilometer to go it was the Belgian who went for the last final push, and Luis couldn’t help but watch his training mate going for gold.

“I have been training very well for the last weeks, I knew I was in shape but everyone here is. I am extremely happy to finish the season with this win, means a lot to me”, said the Belgian. “I felt quite good during the run but I didn’t want to go to early. Here it can be deadly if you go too early. I knew I could do it so I just had to wait for the moment. The first 500m was taught, I know Vince is fast but I thought that he wouldn’t be able to catch me, so it was just tough mentally and physically, but I made it”, he explained.

See also:  Video: How To Change A Bike Tyre

Geens stopped the clock on 52’20’‘, with Luis crossing the finish line in second place and Bicsak claiming in Abu Dhabi the second podium in the Series of his career. “I am super happy even finishing second”, explained the Frenchman. “There are two reasons why I am very happy, one is Jelle (Geens) winning, and the second is that I am back in shape, even if I finished in second here. I have been through hell the whole summer, it was a hard time for me, and this is a great way to start the season and finish the year”, he said.

“The 5km on the run were incredibly hard for me, I used my last gear on the bike and it was really tough for me” said Bicsak, also back in the circuit after an injury after the Tokyo Olympics. “I went to different hospitals to be treated and I only had three weeks to prepare for this race, so I am extremely happy with the result”, he explained.

Fourth place was for another frenchman, Pierre Le Corre, back among the top athletes of the world, while the fifth place was for Serrat Seoane, who is also the new Maurice Lacroix World Triathlon Championship Series Ranking leader.