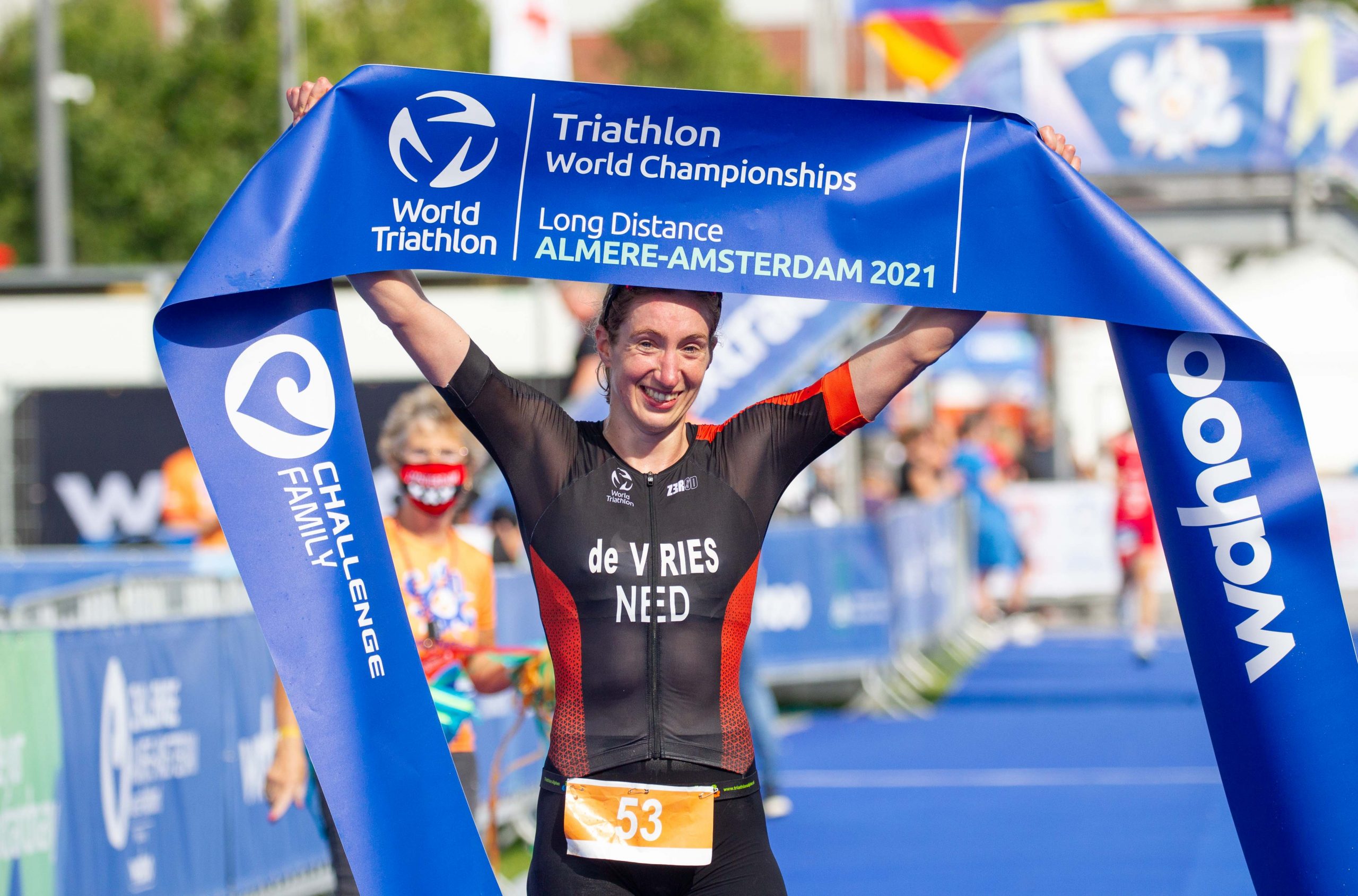 In a race in which almost all records were broken – bike records, run records and course records were crushed – Kristian Høgenhaug (DEN) and Sarissa de Vries (NED) were crowned Long Distance World Champions. The 2021 World Triathlon Long Distance Championships Almere-Amsterdam delivered a more than spectacular race. Høgenhaug finished in 7:37:46, while De Vries became world champion in 8:32:05. “No idea what was in the air today, but 40 years of triathlon in Almere was celebrated in a great way.”

At 7:00am the pro men’s race started and soon a leading group of seven athletes formed. Initially it was Spain’s Pablo Gonzalez Dapena who took the lead, but about halfway through things apparently weren’t going fast enough for Jesper Svensson who then took over the lead and picked up the pace some more. The Swedish athlete didn’t give that position away either and eventually exited the water in 47:08. In the lead group, meanwhile, nothing had changed and so Antony Costes (FRA), Pablo Dapena Gonzalez, Kieran Lindars (GBR), Sam Laidlow (FRA), Alexander Berggren (SWE) and David Mcnamee (GBR) came out of the water on Svensson’s feet.

On the bike it was super bikers Svensson, Høgenhaug and Costes who set a very high pace. After 45km the three of them held the lead, followed first by Laidlow and the Czech Lukas Kocar, who had ridden nicely to the front and was at that moment in fifth place at about two minutes behind. Shortly behind Kocar were two big favourites, Gonzalez Dapena and Andrew Starykowicz (USA), who is well-known for his powerful biking skills. Two minutes behind Starykowicz, the Dutch local hero Evert Scheltinga followed in ninth position, at that moment more than four minutes behind the leaders.

Halfway through the bike there were quite a few changes, as Lindars crashed out and race favourite Starykowicz also dropped out after suffering a damaged eardrum from a kick in the swim. At the front, however, Høgenhaug and Svensson continued to set the pace and that pace proved too fast for Costes, who lost connection and came through with a 3:37 minute gap. Behind Costes, Kocar was still riding in no man’s land and also behind him nothing had changed in the group that followed at almost eight minutes. In that group were a number of top Dutch athletes, but also Gonzalez Dapena and Thomas Steger.

In the end, Høgenhaug and Svensson stayed together until the end of the bike, both beating the bike course record which had been held by Cameron Wurf since 2018 (4:10:49). Høgenhaug took the record in 4:03:15 and Svensson rode 4:05:40. However, they weren’t able to enjoy those records for long, as when Adam Hansen returned to transition in fifth position; the Australian was the fastest athlete on the bike in 4:02:46.

And so an interesting marathon ensued with Høgenhaug and Svensson running side by side for the first four laps, talking and laughing with each other. This did not mean that they were having a social run because the speed was consistently under four minute kms and with that both men were heading for a considerable course record. After about 18km, a first acceleration was placed by Høgenhaug, but Svensson was able to match it well at first.

After about 30km, Høgenhaug made his decisive move, accelerating once more and leaving Svensson behind. From that moment on, it was also clear that the course record would be beaten and even Jan Frodeno’s world record – 7:35 – seems to be a possibility for a while. Høgenhaug continued to run at a high pace and eventually finished after 7:37:46. “On the bike I felt I was good, but I never expected this. During the run, I was side by side with Jesper for a long time and we talked about everything and anything. Just, nice and fast ticking off the kilometres. This finish time, unbelievable. I was fourth, third, second and now finally first in Almere. This is really a beautiful race.”

In the women’s race, it was Denmark’s Camilla Pedersen who dictated the race at the beginning, while Dutch local, Sarissa de Vries, was the only woman who could follow. Just like in the men’s race, there was a change in this situation in the second lap and De Vries started setting the pace. While the two athletes saw their lead only increase, their position remained unchanged and eventually De Vries exited of the water after 53:31 minutes. On her feet Pedersen and then it was almost a three-minute wait before the first pursuer, Elisabetta Curridori (ITA), came ashore. From that moment more ladies followed, including Michelle Vesterby (DEN), Ilona Eversdijk (NED), Manon Genet (FRA), Sarah Crowley (AUS), Seleta Castro (ESP) and Marta Bernardi (ITA).

During the bike, De Vries and Pedersen stayed together for a while, but it didn’t take long for the Dutchwoman to ride away from the Danish athlete and for De Vries to go solo into the lead. This undoubtedly gave her wings, because after just over 40km she already had over a minute on Pedersen, although in the meantime Vesterby and Genet gaining and at that point were only two minutes behind De Vries. From this point all athletes also turned to the part of the course where they had to deal with head wind, something that was not necessarily to De Vries’s advantage as she was riding totally on her own.

In the first few kilometres with the head wind, De Vries lost some time, but still the Dutch athlete managed to maintain her lead. Halfway through, she came through with a lead of 1:18 minute over Vesterby and Genet, who were still riding together and no doubt felt that they were slowly but surely getting closer. Following in fourth was Crowley, who was backing up after racing the European Long Distance Championships at DATEV Challenge Roth powered by hep last weekend, but with a gap of 5:55 minutes still had a good chance of a placing.

That didn’t last long though, because in the following kilometres Crowley started to lose a lot of time and after 130km she was in fifth place with a gap of more than ten minutes. At this point De Vries was on fire again and she had extended her lead on Vesterby and Genet back to two minutes.

In the end, De Vries set the fastest bike time when she returned to the transition area first – 4:32:41, a new bike record in Almere – but when Vesterby returned as second, the bike course record was broken again: the Dane clocked 4:30:56, coming back to the transition area only a minute behind De Vries. When starting the marathon, therefore, the battle seemed to be between these two women.

But that was not the case, because ultimately Vesterby could not match the pace of De Vries, but French woman Manon Genet managed to get closer and closer. After about 28km it became really exciting, when De Vries had to throw up a few times with stomach issues, losing a lot of pace and it was uncertain whether she would be able to continue. Still, she managed to pick herself up, eventually running to victory in a time of 8:32:05. “I just don’t have words for this and I don’t realise it yet. I’m world champion in such a time. It’s really unbelievable.”