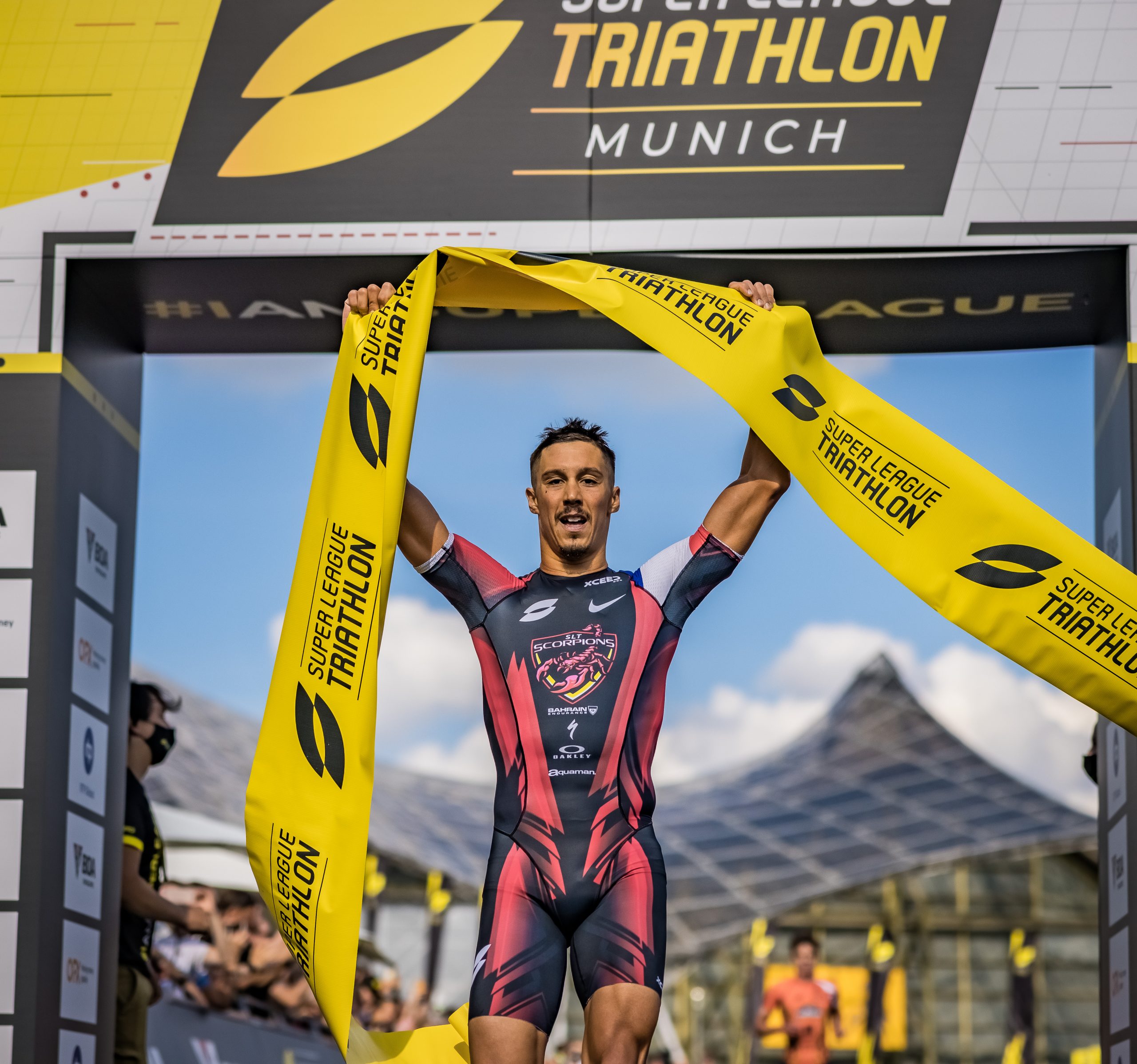 Sporting history looms over Munich’s Olympiapark, the home of the 1972 Olympics and 1974 World Cup final, and it would be Vincent Luis and Jess Learmonth who’d create some triathlon history today as the winners of Germany’s first-ever Super League Triathlon event.

Following London’s Triple Mix last weekend, today’s format was the Equalizer, beginning with an individual TT bike leg of 2.4km to decide the starting order of the pursuit-style Stage 2. The latter would see two triathlons back-to-back, consisting of a 300m lake swim followed by a 3.6km bike and a 1.8km run.

After placing second behind New Zealand’s Hayden Wilde at Super League London, French short-course tri star Vincent Luis powered to SLT victory in Munich – his first major win of 2021 – to become the series leader with two events to go. The final swim, bike and run legs of Munich’s Equalizer format became a showdown between Luis and his long-term tri rival Jonny Brownlee but the French star, aided by a Short Chute advantage, was first to cross the line ahead of his British rival. GB’s Alex Yee was third.

After coming close in London, the two major players of triathlon looked in the mood for revenge from the moment the racing began. But it would be Luis who would wrestle control of the race’s final stages, knowing he had a Short Chute up his sleeve and applying it just before the finishing chute to take the overall lead in the series. An added bonus was a bucketload of points for his SLT Scorpions team.

“I had to really dig deep on the swim to grab the Short Chute and I was pretty empty on the last bike and run,”said Luis at the finish. “First feels a lot better than the second I got in London! I even thought about not using the Short Chute to set up a fair sprint with Jonny, yet he was strong on the run and attacked a few times, and I didn’t want to waste what I’d fought for on the swim.”

Having surged to success in London’s West India Quay a week before, Britain’s Jess Learmonth once again claimed the $20,000 winner’s cheque in Munich with a commanding performance.

The British star – a month after winning Olympic gold in the Mixed Team Relay in Tokyo – took command of the Equalizer format at the start of Stage 2’s swim leg and refused to give the chasing field a sniff of the win. Learmonth’s margin of victory was 11secs over Georgia Taylor-Brown, with Beth Potter rounding out the podium for another British clean sweep following London.

Within the first 100m of the day’s first swim, Learmonth started to take control of the race. The Brit 33-year-old led from the front from then on, owning a 10-second advantage (and with a Short Chute to play) over the chasers at the start of the second swim leg. Beth Potter led the chase pack ahead of America’s Katie Zafares, but Learmonth exited the water with a 22sec lead over the chasers.

That lead was 25secs by the end of another tight and technical bike leg, and such was Learmonth’s confidence that she didn’t even take the Short Chute until the last corner of the race, with her victory barely in doubt during the run. Learmonth’s margin of victory was 11secs over Taylor-Brown, with Beth Potter rounding out the podium for a British clean sweep.

“That certainly wasn’t easy and I needed that lead onto the final run as they were closing me down,”added Learmonth at the finish.“I wanted to savour the race so I didn’t use the Short Chute until the very end. All I was thinking during the race was about cornering well, smashing it up the hill and descending well.”

Super League now heads to Jersey for the third race of the Championship Series on September 18 before the finale in Malibu on September 25.