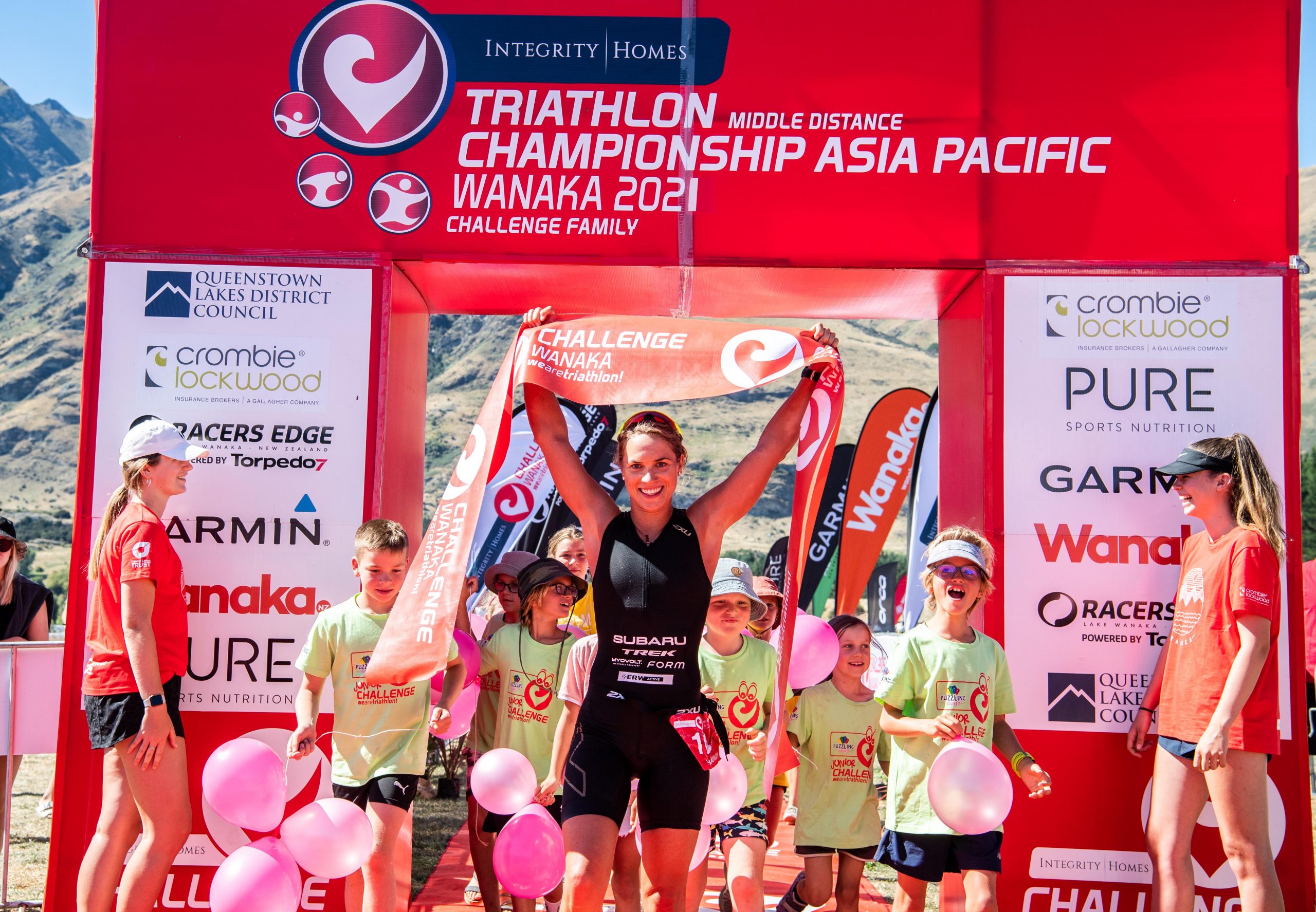 2019 winner Hannah Wells repeated her success with a triumphant win on the tough new 2021 course. “I was really happy with my swim and to stick with Becs [Rebecca Clarke] was great as she is a great swimmer. I wanted to ride the bike pretty hard and try and remain conservative on the run. That was my plan and it seemed to work,” said an excited Hannah Wells.

Wells came out of the swim with Rebecca Clarke but on the first lap of the 5-lap bike course took the lead and consolidated that into over 4 minutes at T2. The run course leads up into Bike Glendhu mountain bike park and features an uphill section, which tested all the athletes out on course. “I don’t think anyone will like the first 25 minutes of the run, it’s pretty gnarly but the down afterwards is flowy and fun,” said Wells. “I’ll be back next year!”
The 21km run course finishes with a section along the Motatapu road where the women had to pace themselves in the heat and grind out the kilometres. In third place was Maeve Kennedy an Australian who has recently moved to Wānaka and gained professional status.  Kennedy is new to on-road triathlon, having raced and won Xterra triathlons previously and showed her calibre as she gained on the lead two on the run. But the experience and grit of Wells and Clarke shone through and they came into the finish corral to a cheering crowd in first and second 10 minutes behind.
“My initial plan was to solo the swim but Hannah has no weakness now and is swimming with me, so I decided to ride my own ride and try and keep a time gap to her not too much and put time onto third and fourth place,” commented Rebecca Clarke.
It was the third time this summer “new kid on the block” Kyle Smith, as his nemesis Braden Currie affectionately calls him, and the Multisport Wānaka local Currie have gone head to head. The first time Smith beat Currie by 3mins 40 minutes at the Rotorua Suffer and then at Mount Maunganui by 10 seconds and here today by another 13 seconds. Smith came out of the water first and was fast off on the bike, where he lengthened his lead to just over 4 minutes over the 90km course, which has been described as having a few good pinches in it.
You could see the passion in Currie’s eyes as he went through transition ready to chase Smith down on the run. With Jack Moody in third also looking fresh off the bike and well known for being incredibly strong run. Both Currie and Smith would have been looking behind for Moody.
Over the 21km course, Currie took 4 minutes out of Smith and left all the spectators on the edge of their seats as the news keep coming in of him gaining fast. The feeling was electric when the two came down the Finish shoot together with Smith jubilant he pipped him for the third time by a mere 13 seconds.

“Yeah I rode too hard,” joked Kyle Smith. “I jumped on the bike and my power metre wasn’t paired. So, I thought oh well, that is basically a doctor’s prescription for a two-hour life expectancy. I just rode to feel and it is super hard as I felt good, so when you get out there you push way too hard and I thought I had to shimmer down and wait for the run. Knowing how hard it was going to be and it was brutal.”

“I knew Braden would be coming home strong so I knew I had run as hard as I could down the hill and ignore the pain from my feet and stomp it. I only just held on really, look at the class of the man [pointing at Braden]. He’s just an animal.”
Braden commented, “My legs were pretty slammed the first 40 -50 kms of the ride and then I started finding some rhythm and I guess undulating runs like that I feel good on. I have been doing a lot of running lately and feel on good run form. I didn’t really fade, just felt better and better all the way through the run. I guess it was just a touch too much lead. I think there was 3 km to go and I knew I had to go 15secs faster than Kyle and it was all downhill. I thought however much he blows up, it is still hard to run that much faster. Yeah, I gave it everything and tried to make it as exciting as I could.”
Jack Moody who is the former national steeplechase NZ champion and Queenstown Marathon winner proved his class coming in 4 minutes behind Currie and grabbing the bronze medal position.
The professional athletes showcased their amazing talents, but it was some outstanding performances by the Age Groupers which also had the crowds cheering. With 800 competitors across the Challenge Half, which was also the Tri NZ Suzuki South Island Middle Distance Championships and the Garth Barfoot Aquabike there were plenty of fantastic performances.
The first men’s Age group finisher Matt Kerr had an epic race being chased by a talented field of triathletes. With Jared Millar coming in second over the line and George Millar in third.
In the women’s Age Group field, Annabelle Bramwell came in with line honours with Olivia Ritchie and Katherine Reardon following on in with the passionate crowd cheering.

The Garth Barfoot Aquabike was won by Georgina Thornton, followed by Danielle Donaldson and Julia Hunt. The men’s field was won by Tri NZ High Performance Coach Stephen Sheldrake, then Michael Crowe and Jason Dobson in a well-deserved third.

“We are just so happy to have been able to host everyone here at our new venue in Glendhu Bay. The feedback we have received so far has been amazing,” said a delighted Race Director Bill Roxburgh. “We want to thank everyone who has supported us, the volunteers, sponsors, my team and all our fans and competitors across all the days for their positivity and helping us create a wonderful experience for all.”

Kaboom! How to Avoid Bonking on the ride