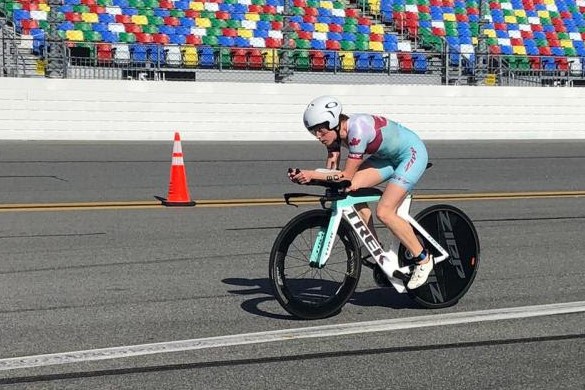 With a huge force majeure Paula Findlay just won the PTO 2020 Championship, bringing home an astronomical amount of $100,000. The Canadian, who also won CHALLENGEDAYTONA last year and thus prolonged her title, was on fire the whole day, leading the race almost completely. “I was so shocked. In a field like this I thought maybe a top ten would be great. I felt really good all day. It was one of those perfect days that you don’t get very often.” Behind Paula Findlay it was Anne Haug and Laura Philipp claiming second and third place.

It was the British Lucy Hall who started the race in front with a powerful swim. Hall came out of the water after 24:15 minutes and had a gap of eight seconds on Lauren Brandon (USA). Favourites like Fenella Langridge, Holly Lawrence, Jodie Stimpson, Nicola Spirig, Paula Findlay and Lisa Norden all followed within 45 seconds so at this point everything was still possible.

Hall initially controlled the race during the first kilometres on the bike as well, or at least did not relinquish her leading position. That changed after about twenty kilometres. That was the moment Findlay and Norden pushed up their pace and came alongside. It was Findlay who set the pace for the first few kilometres, but with about 35 kilometres to go, Norden started to take the lead. This didn’t change anymore during the bike. In the meantime Laura Philipp and Anne Haug, both from Germany, were also working on a strong bike ride, moving up to eighth and ninth position.

It was Findlay who came out of the transition zone first, starting her 18km run very solid. Norden followed just a couple seconds after, but not much later she dropped off due to a calf injury. Also Haug wasn’t lucky either, as she was immediately forced to go into the penalty box for violating a drafting rule. In the penalty box, however, she showed herself to be positive: “I’m going to run as fast as possible now. It would have been easier if I had 21 kilometres left instead of 18, but I’m trying. I’ve nothing to lose.”

Haug kept promise and started to push the run, heading towards the second spot very soon. “I was even more motivated after the penalty. Paula had an amazing race, there was no chance to beat her today. I wanted to win here and everything you can cope for is putting your best performance out during the day and I really did.”

Also Laura Philipp was making a comeback during the day. After swimming outside the top ten, she moved forward in the field during the bike and run, eventually ending up on an amazing third place. “It was absolutely fantastic. I couldn’t believe I was able to make it to the top three. I’m so proud of myself and I’m trying to soak everything up now, because this event is so special for me. I expected to have a big gap after the swim and tried to be patient since I know 80km on the bike can be tough. This was my first Middle Distance and now I know how much it can hurt.”

See also:  Video: How Do I Avoid Saddle Discomfort? | Ask GCN Anything About Cycling
Follow us