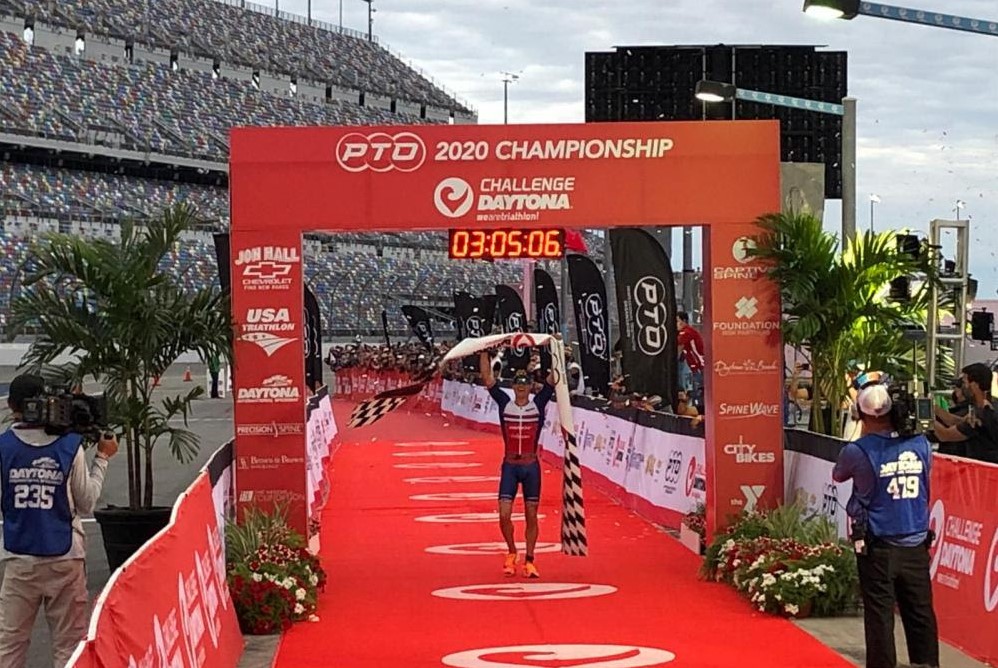 In a race that grew to epic proportions, where favourites dropped out but outsiders in some cases showed unexpected things, there was just one supreme winner at the PTO 2020 Championship: Gustav Iden from Norway. “I raced smart once again. I felt like I had pretty good control during the run, but on the bike I was struggling till the very end.” Behind Iden, Matthew Hanson and George Goodwin finished second and third. Title defender Lionel Sanders had a bad swim but fought his way back into the top, ending up a few seconds short of the podium.

“It shouldn’t be allowed”, Iden talks and laughs about the stellar pro field at the starting line of the PTO 2020 Championship at CHALLENGEDAYTONA. “I was thinking this is torture.” The race was initially made hard by Henri Schoeman, as the South African came out of the water after just 22:24 minutes, with most of the favourites following closely.

On the bike, a large leading group quickly emerged, while Magnus Ditlev was riding strong from the back and made up for his more than two minutes loss at the swim. When he took the lead about halfway during the race, he was hurting a lot of athletes with his amazing pace. Sebastian Kienle, who was not in the leading group anyway, ended the race early and later Alistair Brownlee, perhaps the biggest favourite in advance, stepped out of the race due to cramps. “I was dying completely”, he said just some minutes before ending his race.

Rudi von Berg was the first athlete starting the 18 kilometer run, briefly followed by Sam Appleton, Thomas Davis, Timothy O’donnell, Henri Schoeman and Vincent Luis, among others. Luis however still had two minutes to spend in the penalty box and therefore lost the connection with the fastest runners.

In the meantime, Iden pulled up to the front and gave everyone a reality check. His running pace proved to be inimitable and he quickly expanded his lead. Behind him it became very exciting for medals, but a final sprint was eventually decided in Matthew Hanson’s favour. “The smile hasn’t left my face since crossing the finish line. Wow. It was hurting during the run. I guess I came off the bike in 20th or so and it felt pretty good the first kilometres. I just went for it and picked a great day for a great day.”

Just some seconds behind Hanson it was George Goodwin finishing third. “A dream comes true. I was trying not to think like where I was, just keep focused and relax. I just fly through some training processes, try keeping consistent. I probably had like ten or twelve weeks of full training so I knew top ten was possible.”

For Lionel Sanders, last year’s title defender and now fourth, it was a ‘tough day at the office’. “Every day is tough at this course, but this one was very, very tough. Especially the competition and my swim like garbage. But it’s ok; I came here and wanted to know where I stand. Now I know where I stand.”

PTO 2020 Championship pro press conference: 'Let's not make it a gunfight, but a nuclear war'