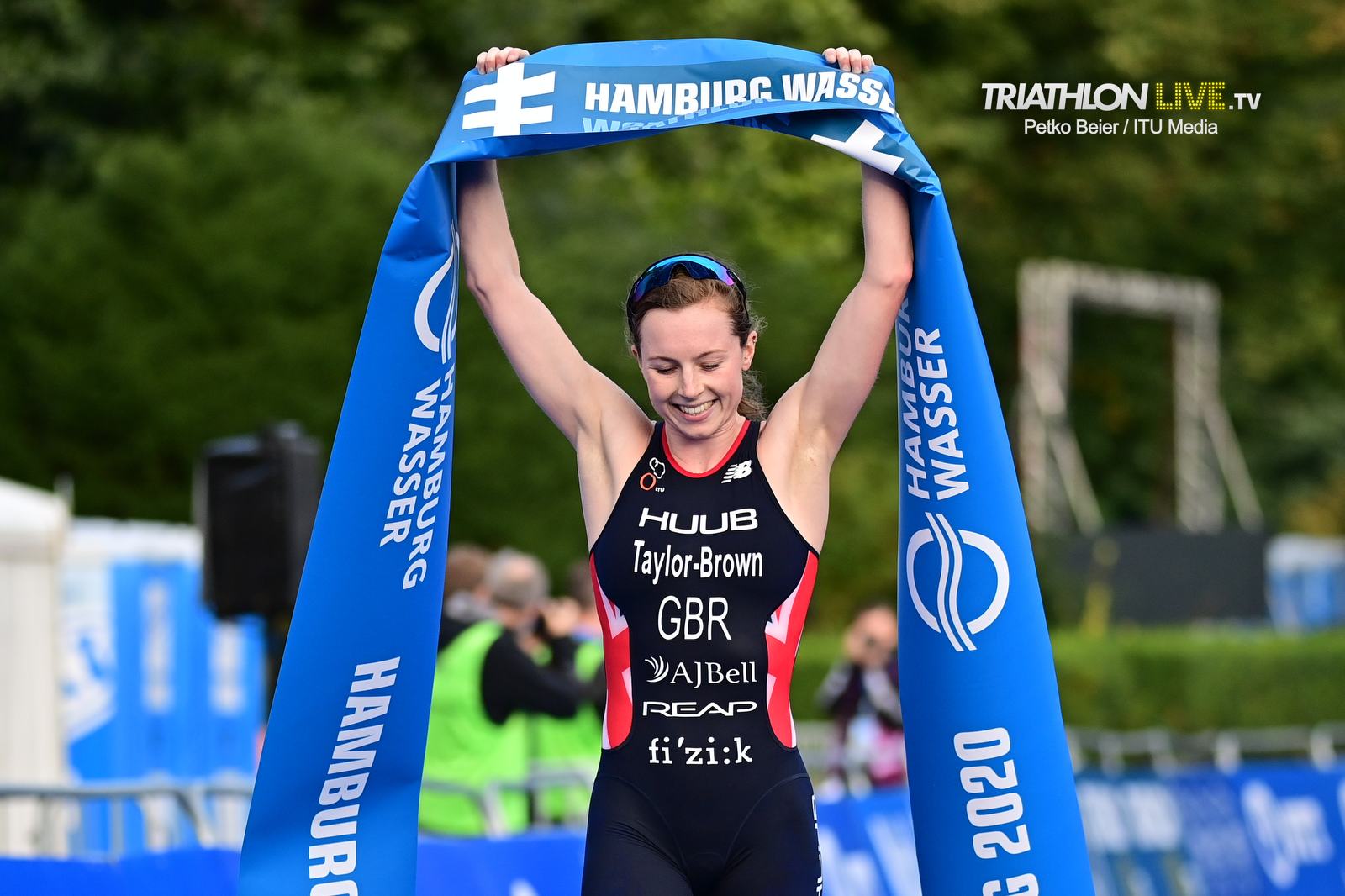 The field was deep with talent and experience and the race always looked like being hugely unpredictable given the past 6 months, but it was to be France’s Vincent Luis who delivered a composed sprint-distance performance and a brilliant second consecutive world title at the 2020 Hamburg Wasser World Triathlon. After an excellent swim had helped put him in a front bike pack that included Alistair Brownlee and another Frenchman Dorian Coninx, it was on the run that the 2019 champion was able to pull away with only teammate Leo Bergere and Portuguese Vasco Vilaça for company, the 20-year-old holding on for a brilliant silver in only his second WTS outing.

“I knew I was in good shape and i’ve spent the last six weeks doing a lot of sessions with some of the best guys in the world,” said a thrilled Vincent Luis afterwards. “I swam good and when you have the two Brownlee brothers with you you always have a good chance to get away. I had the two young guys with me on the run so I was a bit scared but pushed the pace with one lap to go. Im so happy for Leo that he took the third spot. That was a great race for France.”

—
The weather had calmed considerably from the wet and windy conditions leading up to the start time, the lake waters flat for the 750m swim.   As the athletes’ masks were discarded, the pre-race protocols were complete and number one Vincent Luis set himself on the edge of the pontoon for the fastest line to the first buoy. He was quickly out towards the front of the 66-strong field, Austria’s  Alois Knabl also going well, while Britain’s Alistair Brownlee was showing his determination from his 66 start number to pull to the front.

Brownlee and Luis were shoulder to shoulder at the first turn and then the Frenchman pulled ahead of Knabl and started to stretch things out across the second half of the swim. Germany’s Jonas   Schomburg was right on Jonathan Brownlee’s heels too, but for the final 250m straight it was Ali and the home favourite spearing the water and out first up the steps into transition.

Jelle Geens (BEL), Richard Murray (RSA) and Alex Yee (GBR) emerged 14 seconds back, Kristian Blummenfelt (NOR) a further 7 seconds behind them, and it was a sad end for teammate Casper Stornes whose wetsuit issues took him out of the race.

In true style it was Ali Brownlee taking to the front over the first stages of the bike to drive the pace and he was soon caught by his brother and the French trio of Luis, Coninx and Bergere, Portugal’s Vilaca had delivered a brilliant swim and worked hard to join them alongside home favourite Justus Nieschlag and Hungary’s Mark Devay. Barclay Izzard (GBR) and Schomburg soon felt the pace and dropped back to join the growing group of chasers.

That hungry pack was 18 seconds behind in the early stages and led by Murray, but the smaller lead group was well organised round the hairpins and managed to increase the lead to 21 seconds at the halfway point.

With Blummenfelt making his way to the front and soon driving the chase group of over thirty athletes including Murray, Geens, Yee, Shachar Sagiv (ISR) and Mario Mola (ESP), they were able to cut the gap to a more manageable 15 seconds with two laps to go, but that was as good as it would get.

Alistair Brownlee was into the shoes first right at the back of T2, but by the time he was out of transition, Vilaça and Bergere were already into their stride. Luis bridged up to them while the Brit fell back and then his brother was soon caught by Geens and Blummenfelt as they put the hammer down immediately to try and keep the leaders in reach.

For much of the run it looked a lost cause, Luis, Bergere and Vilaça comfortable and maintaining a 13-second lead with 1500m to go. Geens then made a bold move to try and pile on some pressure, Yee also motoring his way into position, bit nobody could do anything to impact on the podium places.

With 350m to go, the small gap Luis carved out grew bigger with every pace, while behind him it was Portugal’s Vilaça who had the final move in the battle for silver, edging out Leo Bergere to the bronze.

Sure enough, Geens had reduced the deficit to 9 seconds as he finished in fourth, Yee with fifth place. Dorian Coninx, Richard Murray, Morgan Pearson (USA), Alistair Brownlee, and Max Studer (SUI) closing out the top 10.

“I don’t know where that came from”, admitted a delighted Vaco Vilaça. “It’s my second WTS, i’m 20 years old, and it’s a dream to race here with these guys and to be at the front too… It’s taking a while to sink in. I was well prepared but didn’t really expect to be in the top three. Ive been working so hard on my swim and I worked hard to catch up with the first group on the bike and was able to keep up the pace on the run. Running like that with Vincent and Leo there was absolutely beautiful.”

A magnanimous Leo Bergere celebrated his first WTS podium but was quick to respect those athletes who had not been able to travel to Germany. “Even if it was a special day, we don’t forget our rivals in Australia and New Zealand and there’ll be work to do to beat them next year, but I’m so glad how it went. We worked well together on the bike, and it’s great to share the podium with my good friend Vince and a pure talent like Vasco.

The full results can be found here

here may not have been any spectators course-side, but there was no shortage of excitement in the women’s race of the 2020 Hamburg Wasser World Triathlon as Georgia Taylor-Brown powered to the line and a superb first world title. The Brit held off Bermuda’s Flora Duffy who took silver, Germany’s Laura Lindemann with bronze.

“I wasn’t confident at all”, said the new World Champion. “I did Super League Arena Games a couple of weeks ago and got some serious lung burn there. I was wondering how it was going to go, I didn’t really expect much from myself. I was grateful to be able to race again. I am quite shocked at that performance to be honest”, she explained.

—
Of the 65 women who took to the start line in Hamburg, it was swim experts Jessica Learmonth (GBR) and Cassandre Beaugrand (FRA) who were quickly out front, powering their way to the first buoy and stretching the field as hard and fast as they could.

USA’s Taylor Spivey and Summer Rappaport were predictably on their heels though, Therese Feuersinger (AUT) coming through to exit the water alongside Learmonth.

Reigning world champion Katie Zaferes, 2018 champion Vicky Holland and 2016 and 2017 champion Duffy emerged together only 8 seconds off the front along with Taylor Brown (GBR) and Lotte Miller (NOR).

With the surface slightly slicked with rain, Beaugrand lost early ground on Learmonth and Feuersinger with a small bike error on the first sharp corner but was quickly back up and riding

Duffy and Zaferes were heading the chase pack looking to catch Learmonth and Feuersinger just five seconds ahead, the likes of Rachel Klamer (NED), and Laura Lindemann behind them and down 13 seconds off the leaders.

See also:  What to watch: 8 triathlon films and documentaries

By the halfway point the front duo were caught and Georgia Taylor Brown assumed the duties out front of a large leading group of 18 athletes.

Up front, almost all the big names were looking to set up a dramatic shootout over 5km.

Learmonth was straight out alongside Flora Duffy, Katie Zaferes struggled in T2 and found herself five seconds back, leaving Duffy and Learmonth opening up an important lead over the first 500m, quickly joined by Taylor-Brown after she kicked on to join them.

Spivey, Lindemann, Klamer and Maya Kingma were holding on but were soon 15 seconds back from the front after the first kilometre as Taylor-Brown made the first move and opened up daylight behind her.

By halfway of the 5km, Duffy had pulled away into second, Learmonth was caught by Lindemann and Spivey, reigning champion Zaferes now 22 seconds off the pole position.

It was Taylor Brown wanting to dictate the race though and she looked composed with a healthy 10-second advantage into the second of two laps. Duffy was never going to give up the chase though, but as Spivey and Lindemann faded, gold and silver were sealed.

It was an impeccable race from start to finish for Taylor Brown, and she could really soak in her first world title down the final few hundred metres. Silver for Duffy was another great effort for the Bermudian beset by injury in 2018 and 2019, and bronze went to home favourite Lindemann.

““It just sort of happened”, said the new Worl Champion. “I felt really comfortable setting off on the run, I really enjoyed the gravel running, that’s like my kind of running. I felt really comfortable on the gravel and thought let’s just go for it”, said Taylor-Brown.  “It feels weird saying that I am the Wrld Champion because it’s been an unusual year. We’re missing a few people as well. I am the world champion but in my eyes, Katie (Zaferes) is still the World Champion next year.”

Two-times world champion and now silver medallist Flora Duffy explained: “This was a huge race for me, the back half of 2018 and the first part of 2019 were really difficult. To miss most of this year because of COVID-19, it has a long time since I feel like I am in my stride and hit a podium. I am happy for personal reasons to finish second today, it was a really big step for me,” she said. “I’ve had a good progression on my run. The last few months I have been able to be consistent again for the first time in a really long time. I knew I was coming in with pretty good run form. But you know, I am a competitor and every time I line up at a World Championships I want to win so maybe there is a little sting of being that close but it is great progression and I am just so thankful we got to race safely. Georgia was phenomenal today and it’s fantastic to be back on the blue carpet.”

Racing on home soil, a delighted Laura Lindemann said: “It’s a home race and home races are always something special to me. There is always extra pressure because I perform better with more pressure, it suits me. I had really bad transitions, after each transition I had to improve my position. It was a hard race from start to finish.”