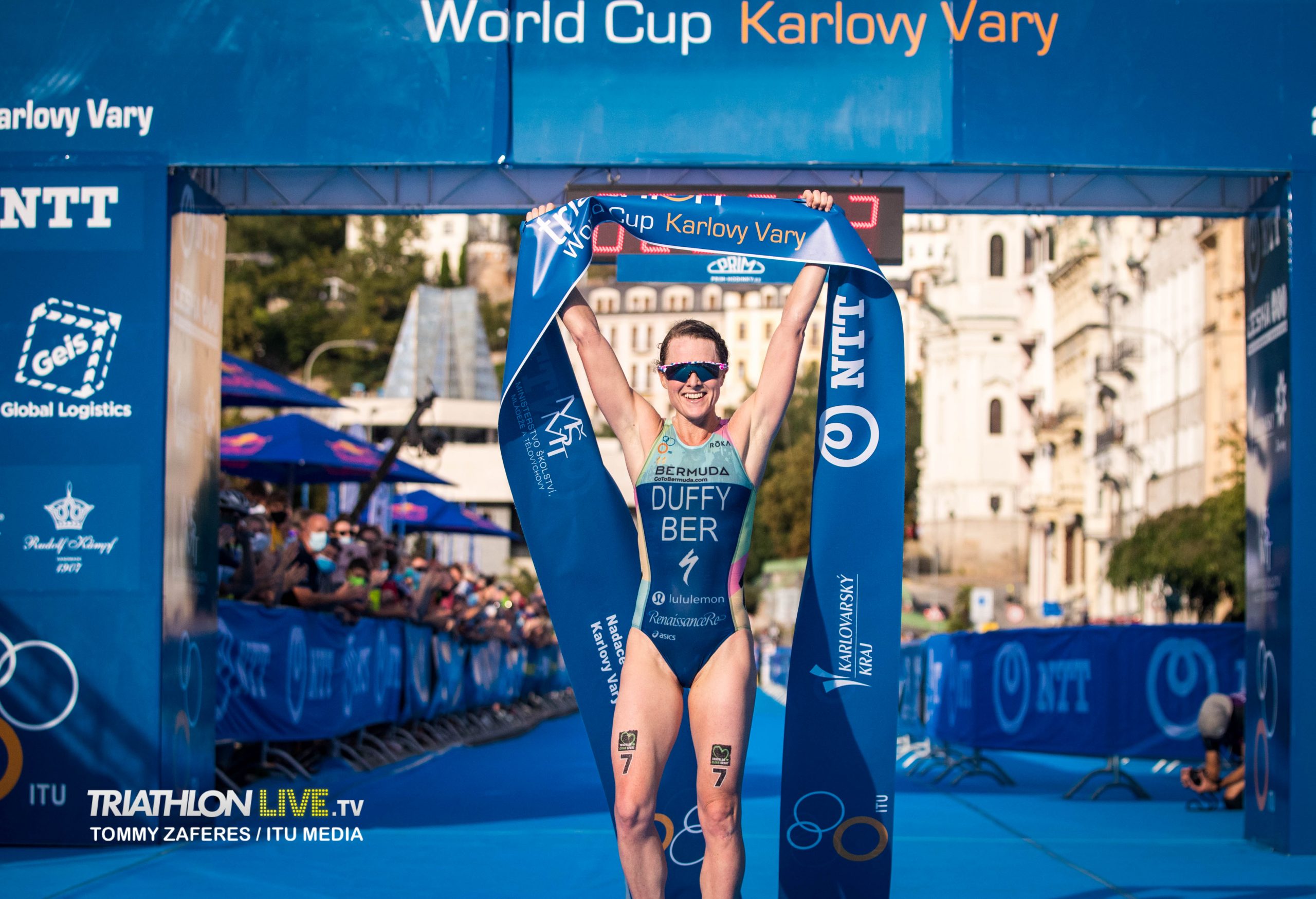 Sunday afternoon in Karlovy Vary saw Bermuda’s Flora Duffy back on an Olympic-distance course for the first time since the Lausanne Grand Final, and putting in a performance to prove beyond any doubt that her injury troubles were finally behind her.

Duffy took the tape for the first time in a World Triathlon race in two-and-a-half years, the 90-second margin of victory over newly crowned World Champion Georgia Taylor-Brown highlighting the dominance of her display on a demanding course. The Netherlands’ Maya Kingma‘s joy was evident for all to see as she rounded off a storming run to score her first ever World Cup podium with bronze.

“Wow! It was so hard, man that was a shock to the system,” admitted a thrilled Duffy. “A first Olympic distance of the year and on such a challenging course and with such a stacked field. Jess is unbelievable in the swim and I was just trying to recover from that for most of the bike to be honest, which isn’t easy on this type of course. I wanted to ride strong but not over-extend myself and the run just felt like survival. I’m just so thrilled to win, it has been a while since I’ve done it at this level and it’s a huge confidence boost and something I feel personally i’ve really needed.”

—
One of the strongest World Cup fields in recent memory saw 54 athletes line up for the 1.5km lake swim, and predictably it was Jessica Learmonth who wasted no time getting out ahead.

The Brit still led the field as she raced along the pontoon and dived back in for the second lap of Rolava Lake, Katie Zaferes in check with Vittoria Lopes and Natalie van Coevorden.

By the end of the second lap, Learmonth’s lead was an incredible 25 seconds, but wetsuit issues in transition cost precious time and it was Zaferes narrowly out first onto the bike. The pair wasted no time worrying about how the pack behind them might be looking, riding aggressively on the point-to-point section and attacking the early stages of the 7 technical city laps.

Behind them, Laura Lindemann and Duffy were also riding together as a pair and trying to close the gap, but they were joined by World Champion Taylor-Brown who was looking to make up the 60-second deficit on the front out of the swim.

The chasers worked well together, including the Brazilian duo Luisa Baptista and Djenyfer Arnold, a small error from Duffy seeing her swerve erratically for a moment off the back of Taylor-Brown’s bike and there was still 30 seconds to the front two with three laps to go.

The second chase pack, including Valerie Barthelemy, Erika Ackerlund, Rachel Klamer and Lotte Miller were well over two minutes adrift and losing time at the turn of each lap.

It was on the the fifth lap that Zaferes chose to give her legs a break and drop back to join the chasers, Learmonth left to press on solo and try and keep the pressure on the field, but with the American working with Taylor-Brown and Duffy, it was a formidable bunch in pursuit.

The Brit was showing no signs of tiring out front though, 30 seconds still the difference at the bell but reduced to 17 seconds by the time she had negotiated T2.

Somewhat inevitably, by the end of the first of the four run laps, Duffy had already picked her way impressively to the front, Taylor-Brown also easing past Learmonth over lap two. Kingma then moved into third at the bell, increasing the pace up the final long climb to ensure the third podium spot was hers.

Meanwhile ahead, Duffy was really eating up the final few hundred metres, eventually taking the tape more than 90 seconds ahead of Taylor-Brown. Kingma was just 13 seconds behind the World Champion, and it was another 40 seconds to Learmonth in fourth.

“I didn’t have much energy, the run killed me,” admitted Taylor-Brown. “The first lap of the swim I wasn’t feeling good but I came back to life a bit on the bike. Jess was an animal on the bike pulling out more time, but on the run I knew it wasn’t going to be my day but I stuck it out to the end.

“  I cant believe it. Im incredibly happy”, said Kingma. “I just had to keep fighting in the swim, then pushing on the bike and in the city worked with Flora to attack. I felt pretty strong, and knew it was tough for everyone. I saw top six then five, then four, and then it was the podium.”

f his first performance back on the blue carpet in Hamburg last weekend was an impressively assured display, the manner of 2020 World Champion Vincent Luis’ win in Karlovy Vary on Sunday morning was an even stronger statement of intent for his Tokyo Olympic credentials.

This time over the standard distance and on a hugely demanding course, Luis’ gold really never looked in doubt from the moment he powered out of the first transition in front. Behind him at the line, Portugal’s exciting 20-year-old talent Vasco Vilaça again impressed to take silver in only his third outing on this distance, Belgium’s Jelle Geens motoring to bronze with a stunning run.

“It’s really nice to race as the World Champ. Karlovy Vary is a great race and a tough one that really rewards the best swim-bike-runner. I was really happy with the group on the bike and it was a shame they (Kenji Nener and Mark Devay) crashed there with 1km to go, but it’s the kind of race I like; a quick breakaway on the bike and then a fight against the top runners.

—
The men lined up under optimal dry, sunny conditions on the edge of Rolava Lake, the huge field including the newly crowned World Champion Luis and a wealth of big names, many fresh from the exertions of individual and relay championships just eight days before. It was at the end of the first lap of the testing swim that Richard Varga came out ahead of the pack, running down the pontoon and launching himself back in for the second pass closely pursued by Luis.

Jonas Schomburg was right there too, Casper Stornes and Jelle Geens also well placed after one lap, but the field then strung well out on lap two.

Luis took to the front over the final few hundred metres, rounding off what was a devastating swim for his main rivals and their chances of staying in touch on the bike. He followed it with a typically liquid transition to roll out to the point-to-point bike section in a familiar pole position with   Schomburg, Devay and Nener for company, Vilaca and Germany’s Jonas Breinlinger quickly bridging up.

A strong six behind were doing their best to close in, Csongor Lehmann (HUN), Alessandro Fabian (ITA), Diego Moya (CHI) and Bence Bicsak (HUN) among the names trying to catch on as they hit the town section, but there was soon 30 seconds of daylight between them and the leaders and they were swallowed up by a big train of riders.

Morgan Pearson and Eli Hemming were both out with bike issues, leaving Kevin McDowell, Seth Rider and Matthew McElroy flying the flag for the USA a minute off the leaders 15km into the bike.

The gap grew lap-by-lap as the leaders worked well and attacked together, from 60 seconds up to 80 on the final lap, a not-100% fit Kristian Blummenfelt (NOR), Jelle Geens (BEL), Richard Murray (RSA) and Ben Dijkstra (GBR) among the names unable to get into striking position and having to save the legs for the tough run ahead.

A dramatic late twist saw Nener and Devay come together in the tunnel on the final lap to sadly end their challenges, Schomburg also tangled up but carrying on suddenly some 25 seconds back, and it was Breinlinger, Vilaça and Luis 1-2-3 out of T2.

Murray and Geens set about their task 65 seconds back, Bicsak and Dijkstra in pursuit of them, but out front for the second week in succession it was Luis and Vilaça shoulder to shoulder as Breinlinger dropped back on the first climb.

After passing Schomburg, Geens closed in on Breinlinger, and had cut into Luis’ lead at the halfway point of the 10km but was running out of course.   The Frenchman was losing Vilaça by this point too, and the final 5km became yet another showcase of Luis’ impeccable technique and relentless power.

There was simply to be no catching the World Champion, who delivered another big statement of intent for the Olympic year ahead, crushing the demanding course to grab World Cup gold in fine style.

Geens was easing through the gears too, moving into a podium spot after dropping Murray who finished in fourth, Breinlinger eventually finishing in eighth. Bence Bicsak was in good shape for fifth, the Spanish duo of Genis Grau and Antonio Serrat claiming sixth and seventh, Lehmann and Dijkstra rounding out the top 10.

“It’s two hours of extreme pain, I don’t know how I did it, I just thought keep digging – one more stroke on the swim, one more lap on the bike, one more km on the run,” said a happy, exhausted Vilaça. “Ive never been in a group that worked so well together, but then putting the shoes on I cramped up and didn’t know what I could do, so I waited to see if my legs would recover and then after two laps I started to get back into it. I’m so happy to be racing with these guys.”

“The swim was very rough,” said Geens. “I had to really cross from left to right to that first buoy and then we started out quite strong on the bike but then I was getting annoyed with some of the people in the group. On the run I was still frustrated and said to myself no one is going to outrun me, but I couldn’t quite get the second I wanted.”

Fasted Vs Fueled | What's The Best Way To Fuel For Morning Training?

Triathlon on a Low-Carb High-Fat Diet