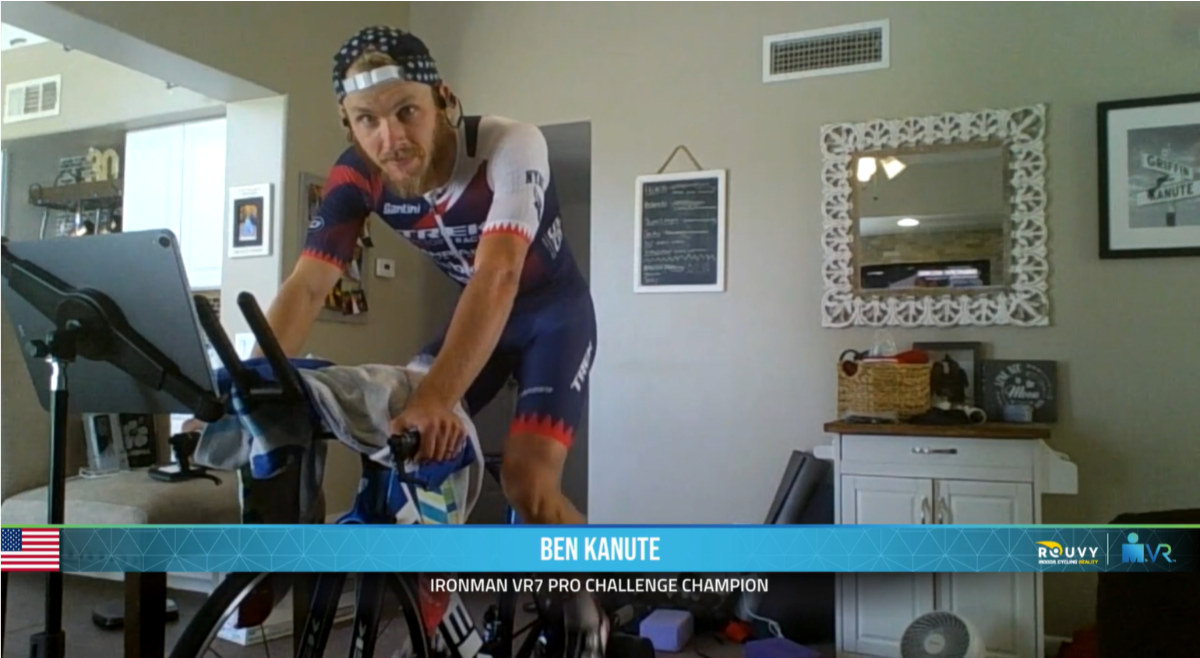 – Over 15,000 athletes from 129 nations registered to compete in IRONMAN VR11 a dual distance format

– More than 105,000 people from around the globe have now joined IRONMAN Virtual Club platform

TAMPA, Fla. (June 14, 2020) – The 11th edition of the IRONMAN® VR™ Pro Challenge saw Nikki Bartlett of Cheltenham in the United Kingdom and Ben Kanute of Phoenix, Arizona take top honors in the women’s and men’s races respectively. For the second straight week, the professional triathletes took on a 3 km in their home communities before hopping on their trainers for the bike portion. From there, athletes took on a 40 km bike ride on the newly offered IRONMAN 5150 Port Macquarie bike course, utilizing Official Virtual Cycling partner ROUVY’s augmented reality.

On Saturday, the professional women saw IRONMAN VR7 champion Nikki Bartlett (GBR) sweep all of the primes and take the overall victory with another impressive performance. Bartlett finished the 3 km run and 40 km bike in an overall time of 1:07:16. Making her second IRONMAN VR appearance, Angela Naeth (CAN) finished in second place with a combined time of 1:11:21. In their first IRONMAN VR appearances, 2017 IRONMAN North American Champion Jodie Robertson (USA) took third position with a finishing time of 1:13:06 and Summer Deal (USA) rounded out the group with a time of 1:14:28. Deal’s professional triathlete husband Ben, who was preparing to compete in Sunday’s men’s race, cheered her on throughout what was only her second professional race.

The full broadcast of the women’s IRONMAN VR11 Pro Challenge can be viewed, HERE.

See also:  How to watch the 2019 Kona Ironman World Championships

On Sunday, the professional men provided a thrilling finish that saw IRONMAN VR7 champion Ben Kanute (USA) narrowly edge out the field with an overall time of 1:02:26. Just behind Kanute was IRONMAN VR5 champion Joe Skipper (GBR) finishing in second with a time of 1:02:28. In their first IRONMAN VR Pro Challenge appearances, Ben Deal (USA) finished third in a time of 1:04:17 while Taylor Reid (CAN) rounded out the men’s group clocking a time of 1:07:09.

The full broadcast of the men’s IRONMAN VR11 Pro Challenge can be viewed, HERE.

In total, over 15,000 athletes from more than 129 nations and all 50 states set out to participate in IRONMAN VR11. The IRONMAN VR11 sprint distance simulation requires athletes to complete a 3 km Run, 20 km Ride, and 5 km Run between Friday, June 12 at 2 p.m. ET (6 p.m. GMT) and race close this evening, Sunday, June 14 at 7:59 p.m. ET (11:59 p.m. GMT). Competitors who race in the Classic Division can do so anywhere, indoors or outdoors, can complete the three segments in any order and are not required to do the segments consecutively.

The 3,000 athletes who registered for the second race in the new IRONMAN Virtual Racing Championship Series are bound by a different set of rules over a four-week long regulated age-group competition designed to reward top-performing athletes in a structured and competitive virtual environment. An athlete’s overall standing is based upon their top three performances in aggregate over a four-week period. Athletes competing will have the opportunity to earn race slots to the 2020 edition of the IRONMAN® 70.3® World Championship with a total of 75 qualifying slots allocated across age groups for top performers.

IRONMAN VR11 leaderboard updates can be found by visiting the IRONMANVR Facebook Page.

See also:  Video: 10 Ways To Improve Your Average Speed On The Bike – Cycle Faster!
Follow us

Professional Triathletes unite at CHALLENGE FLORIANOPOLIS 2020 with a $60,000 prize purse