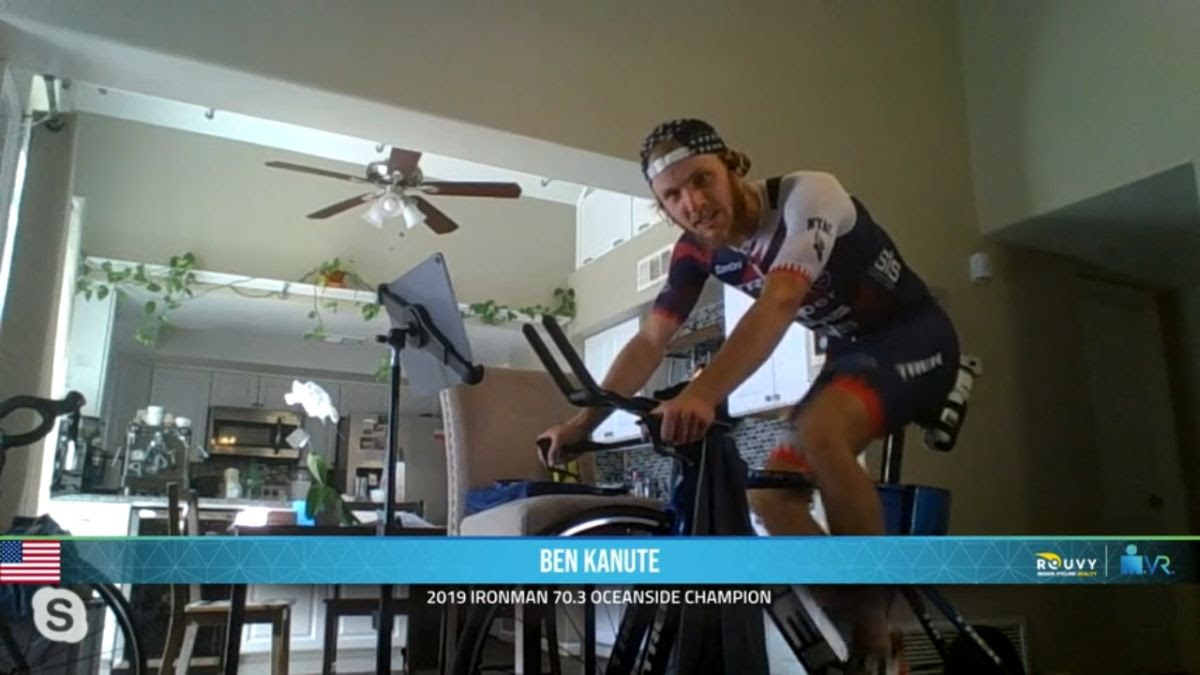 – Over 24,000 athletes from 147 nations registered to compete in IRONMAN VR7
– IRONMAN Virtual Club platform reaches 100,000 members from around the globe looking to prove #AnywhereIsPossible

TAMPA, Fla. (May 17, 2020) – The seventh edition of the IRONMAN® VR™ Pro Challenge saw eight leading professional triathletes battle it out over the course of two days. For the first time the IRONMAN VR Pro Challenged featured two professional women and two professional men racing on the same course each day in the new mixed pursuit format. After the conclusion of two days of racing, Nikki Bartlett of Great Britain claimed top honors in women’s race while Ben Kanute of the United States topped the podium in men’s competition.

In the women’s professional race, Nikki Bartlett (GBR) claimed the overall victory with an impressive performance Saturday, clocking an overall time of 52:39. Sarah Piampiano (USA) finished second in a time of 57:03, while Mel McQuaid (CAN) followed in third clocking a time of 57:36. Laura Philipp (DEU) rounded out the group with a time of 57:37. While not part of the official IRONMAN VR7 Pro Challenge, broadcast host, former professional and three-time IRONMAN Champion Dede Griesbauer joined in on the second lap of Saturday’s races posting a time of 29:08. Griesbauer, along with all other registered age-group athletes in IRONMAN VR, had the ability to ride alongside the Pros by logging onto the ROUVY platform.

The full broadcast of Saturday’s IRONMAN VR7 Pro Challenge can be viewed, HERE.

In the men’s professional race, Ben Kanute (USA) earned the spoils as the victor, completing two laps of 20 km SUPERSEAL bike course in a time of 51:34. Maurice Clavel (DEU) followed in second with a time of 52:36, while Brent McMahon (CAN) came in third with a time of 53:04. Mauricio Méndez Cruz (MEX) rounded out the group clocking a time of 56:36. Continuing the trend, broadcast host, former professional and three-time IRONMAN Champion Michael Lovato jumped on his trainer and joined in on the second lap during Sunday’s race posting an impressive time of 26:55, a time just shy of what Kanute posted on his second lap.

The full broadcast of the Sunday’s IRONMAN VR7 Pro Challenge can be viewed, HERE.

In total, more than 24,000 athletes from 147 nations and all 50 states registered to set out to participate in the IRONMAN VR7 – sprint distance simulation, which began Friday, May 15 at 6 p.m. GMT (2 p.m. ET). The race requires athletes to complete three segments, including a 1.5 km Run, 20 km Ride, then 5 km Run by race close this evening, Sunday, May 17 at 11:59 p.m. GMT (7:59 p.m. ET). Competitors can complete the segments in any order and are not required to do the segments consecutively. Athletes are able to compete anywhere, indoors or outdoors.

Bringing the IRONMAN community together virtually, the IRONMAN® Virtual Club™ continues to grow and has now reached 100,000 members on the platform with tens of thousands completing IRONMAN Virtual Club Challenges since its recent launch. In addition, through the new Race Honorably campaign, IRONMAN’s goal is to provide an exceptional virtual racing experience with credible results that requires athletes to do their part by entering accurate data. Additional details can be found on the IRONMAN VC platform at www.ironmanvirtualclub.com/.

IRONMAN VR7 leaderboard updates can be found by visiting the IRONMANVR Facebook Page.

How To Make Your Bicycle Frame Look Like New
September 10, 2019