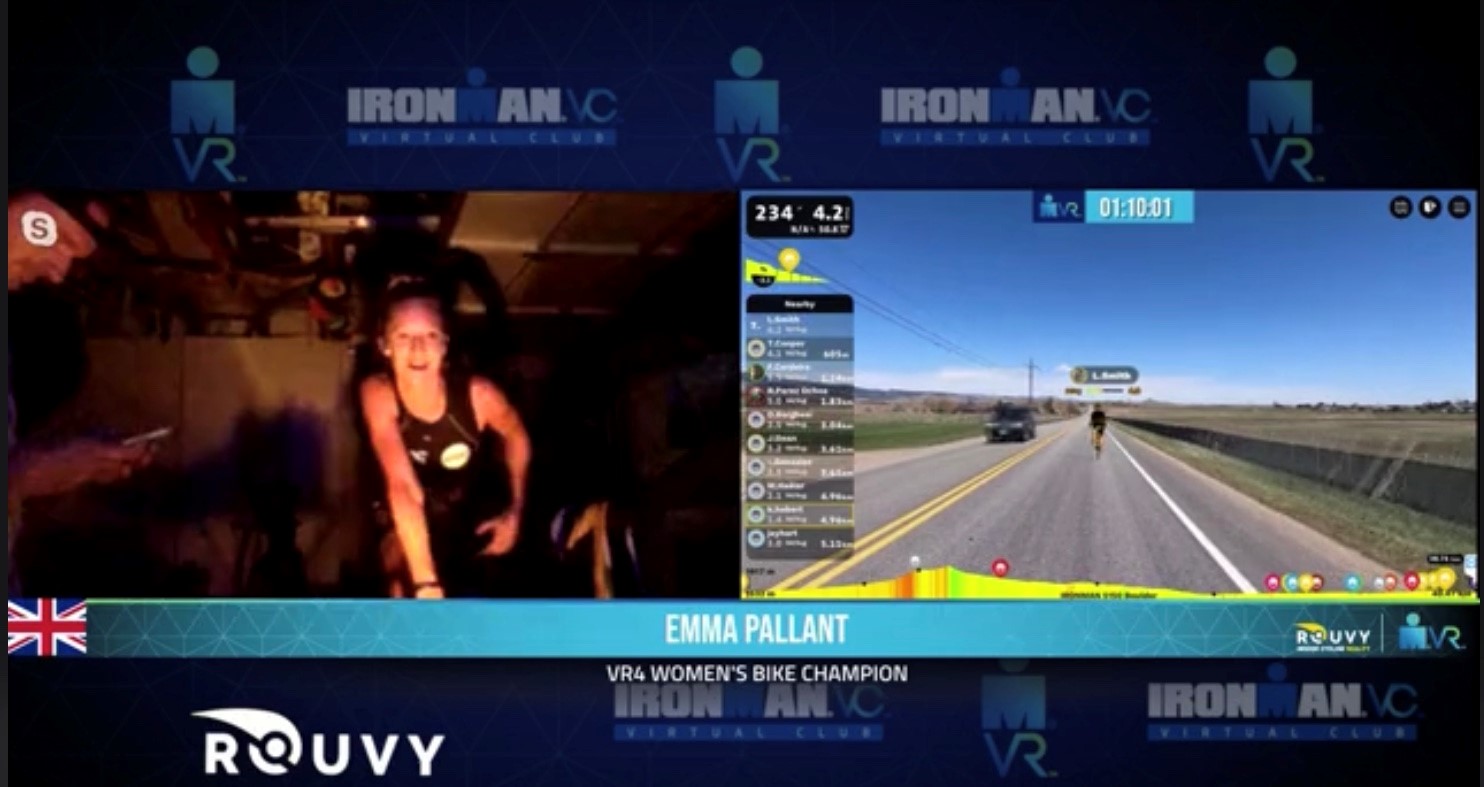 On Saturday, the professional women took to the virtual pavement utilizing Official Virtual Cycling partner ROUVY’s augmented reality to race the IRONMAN 5150 Boulder 40 km bike course. Emma Pallant took the top spot, completing in a time of 1:05:55, while Meredith Kessler (USA) finished in second place with a time of 1:06:40. Lesley Smith (USA) took third position with a finishing time of 1:12:29 while Manon Genet (FRA) unfortunately had connectivity issues with the race, but rode alongside her competition the entire time.

The full broadcast of the women’s IRONMAN VR4 Pro Challenge can be viewed, HERE.

On Sunday, it was the professional men’s turn to hit the trainers in what turned out to be a closely contested race. Arnaud Guilloux was the victor, completing the IRONMAN 5150 Boulder 40 km bike course in a time of 56:46, with Matt Hanson (USA) just behind in second place with a time of 58:23. Nils Frommhold (DEU) took the third position with a time of 59:54, while Ben Hoffman (USA) rounded out the group clocking a time of 1:02:17.

The full broadcast of the men’s IRONMAN VR4 Pro Challenge can be viewed, HERE.

In total, 24,000 athletes from more than 137 nations and all 50 states set out to participate in the IRONMAN VR4, which began Friday, April 24 at 6 p.m. GMT (2 p.m. ET). The race requires athletes to complete three segments of an IRONMAN 5150™ Olympic distance race simulation including a 3 km Run, 40 km Ride, and 10 km Run by the race close this evening, Sunday, April 26 at 11:59 p.m. GMT (7:59 p.m. ET). Competitors can complete the segments in any order and are not required to do the segments consecutively. Athletes are able to compete anywhere, indoors or outdoors. Bringing the IRONMAN community together virtually, the IRONMAN® Virtual Club™ continues to grow and now has 82,000 members on the platform with thousands completing IRONMAN Virtual Club Challenges since its recent launch.

Athletes are able to compete anywhere, indoors or outdoors. IRONMAN VR4 leaderboard updates can be found by visiting the IRONMANVR Facebook Page.

Asia: Cycling/Running Outdoors During the Pandemic

What to watch: 8 triathlon films and documentaries