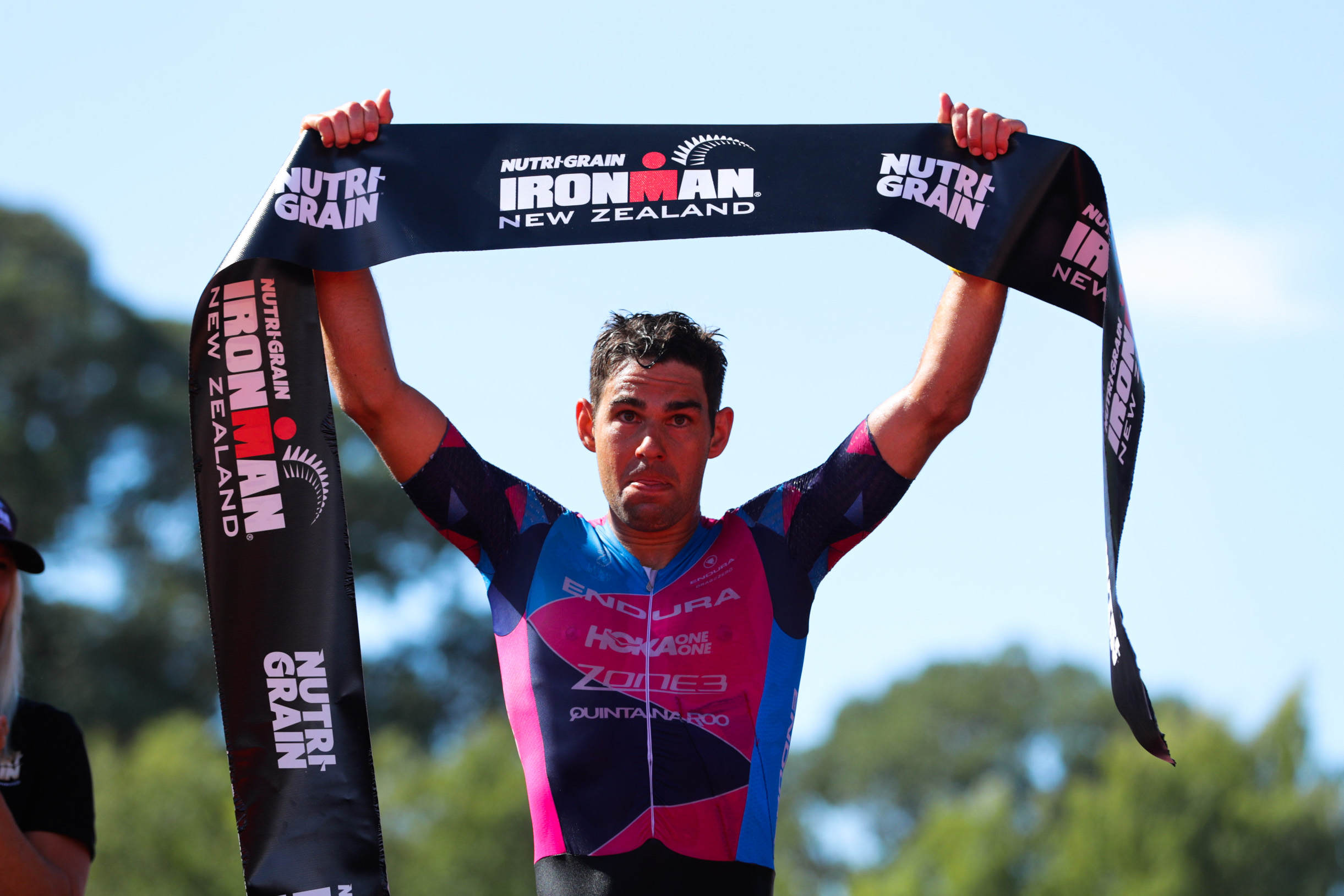 Third time was a charm for both winners at Nutri-Grain IRONMAN New Zealand on a record-smashing day as Joe Skipper (GBR) and Teresa Adam (NZL) reigned supreme in posting maiden victories at the oldest IRONMAN event outside of the World Championship in Kona.

Both had finished runner-up twice in Taupõ but today put their mark on this storied race, brushing aside race records and all challengers on a day when conditions could not have been better for the 2,500 competitors, many of whom will race long into the night.

Skipper confidently predicted a race-record today and was thrilled it was he who proved up to the prophecy.

“I said before the race I have come here twice and each time it has taken a course record to beat me, and I knew this time wouldn’t be any different as I had such a terrible run last time. I knew I could run 2:45 off the bike today, thought whoever won today would post a course record, I am pleased I lived up to that.”

Skipper cut an emotional figure, fighting back tears as he took in the win at the finish line and had thoughts for his Nan, who passed away back home while he has been here in New Zealand.

“I just want to dedicate that to my Nan, she was in my thoughts all day, every time I went through a tough moment, I was thinking of her.”

Skipper had to claw his way back into the race, emerging from the water over six minutes behind Dylan McNeice and a host of other contenders, riding his way into contention with a 4:13:02 bike leg that was less than a minute outside of Andrew Starykowicz’s bike record in 2019.

“This means a huge amount; I am so pleased I managed to do it. That was such a tough race we just went for it on the bike. The main group was four minutes ahead and we were smashing it but not taking any time out of them. Finally, on the second lap they started to crack but me and Phil (Koutny) knew we had to work together to put some time on them going into the run.”

Second home was defending champion Mike Phillips, a result that exceeded expectations and spoke to the bravery of the Kiwi given his limited preparation after overcoming a herniated disc in his back.

“I guess I did everything I could to put myself in a position to finish as high as I could and have a chance to defend the title. It took a big effort from one of the other guys to beat me, I still went 8:01 but for someone to go 7:54 on that course, that is world class, so I am really happy today.

Phillips joked that he was into the unknown for the last 30k of the run.

“I literally started running just over four weeks ago, the first few weeks were just learning to run again. I did Challenge Wanaka and jogged through the run there and have had a couple of weeks of decent running but nothing fast. A month of running for 2:45 today, I can’t complain.”

Third for the second consecutive year went to Braden Currie, the Wanaka athlete cut a dejected figure such is his burning desire to win every time he lines up, but he acknowledged the superb racing from Skipper and Phillips.

“That was phenomenal to be honest, we rode strong on the first lap and I didn’t feel like we rode that bad on the second but Joe went off on his own mission, and backed it up with a phenomenal run and took six minutes off Terenzo’s record, it was a good day for racing that is for sure.”

“I don’t like coming third, it hurts, I am pretty pissed about it, I feel like I put a lot of work in and didn’t have a good day, nothing felt great. The real bonus will be if I have ticked that box, it might make my year a little more cruisy, but it has also given me a lot of motivation to sort my shit out.”

Philipp Koutny (SUI) led off the bike but couldn’t maintain that form in the marathon, eventually coming home fourth, with Dougal Allan (Wanaka) and the incredible Cameron Brown (Auckland) finishing sixth at the age of 47 while Mark Bowstead had a superb day, the Waiuku athlete mixing it at the front of the field throughout the swim and bike to come home seventh.

Meanwhile Adam was imperious in winning her first Nutri-Grain IRONMAN title to go with her back to back Asia Pacific IRONMAN titles, in the process obliterating the course record of Jocelyn McCauley (2019) by nearly 13 minutes on the back of a stunning 4:36:11 bike leg that took over 15 minutes off the record of Lucy Gossage (GBR) from 2016.

“That was awesome, I didn’t know I was on for the record until the end of the race, but I am just stoked. I had a good ride, came through halfway in 2:15 and thought whoops! But I just focused on drinking and hydrating and kept eating and drinking.

“You go through ebbs and flows, but I have some smart people around me, my coach David and partner Dan and we know what I can do, I am just really happy I could execute on the day.”

While she made it look easy, Adam shared some nervousness about how she might bring that one home today.

“There was a little bit of doubt how I would go on the run coming off a ride like that, but I am obviously getting stronger as an athlete and just made sure I stuck to the pace that we had set and kept tapping along.

“This is so cool, I really wanted to win here, my home race and show what I can do. I have won three times in Australia now and you do have Kiwis over there supporting and Dan travels over, but I wanted to showcase that for my family, my coach and team Pewag and all my supporters here in New Zealand.”

Five-time champion Meredith Kessler (USA) finished in second place, after holding that spot for much of the race with defending champion Jocelyn McCauley withdrawing after the bike leg due to illness and 70.3-star Radka Kahlefeldt (CZE) succumbing to illness after the swim.

“I have to give her (Adam) props, that was such a performance, she is a contender to win Kona, that was incredible. Even if I swam with her which I should, I had the bike of my life, but she was 12 minutes ahead, that was amazing, well done to her,” said Kessler.

“100% this reinforces my love for this race and place. I can’t tell you how many people in this town know my favourite word is ‘gumption’, I lost track of many adults and kids shouted out to me ‘give it some gumption’ or ‘Kiwi Kessler’. If anyone comes to the USA I promise to treat them the same, I am so grateful.”

Third on a day of high attrition was a delighted and surprised Judith Corachan Vaquera (ESP), who could hardly hide her delight at a place on the podium.

“I am so happy; I am surprised and excited. I can’t find the words to explain this, I am very happy. It is a very high-level result for me today, during the race I can think ‘yes, I can do it’ and yes, I got it.”

Adam showed her intent by leading out of the water, the former Water Polo star putting 1:40 on McCauley, Kessler and Rach McBride (USA), with Vaquera and Kelsey Withrow next on to the bike.

But once the 30-year-old Kiwi climbed aboard her bike affectionately called ‘Lil B’, the rest were fighting for second and third as history was rewritten by one of the rising stars of the IRONMAN world.

While the winners begin their recovery, many more will be contemplating running into the night to beat the 1am deadline to make it home and experience the red carpet finish in front of family, friends and complete strangers cheering their every step in the unique atmosphere of an IRONMAN, with the people of Taupõ and the 2,200 Mercury Volunteers helping to bring them home.

Complete Guide: Improve your cycling for short and long races with indoor training

6 Ways to Transition from Runner to Triathlete