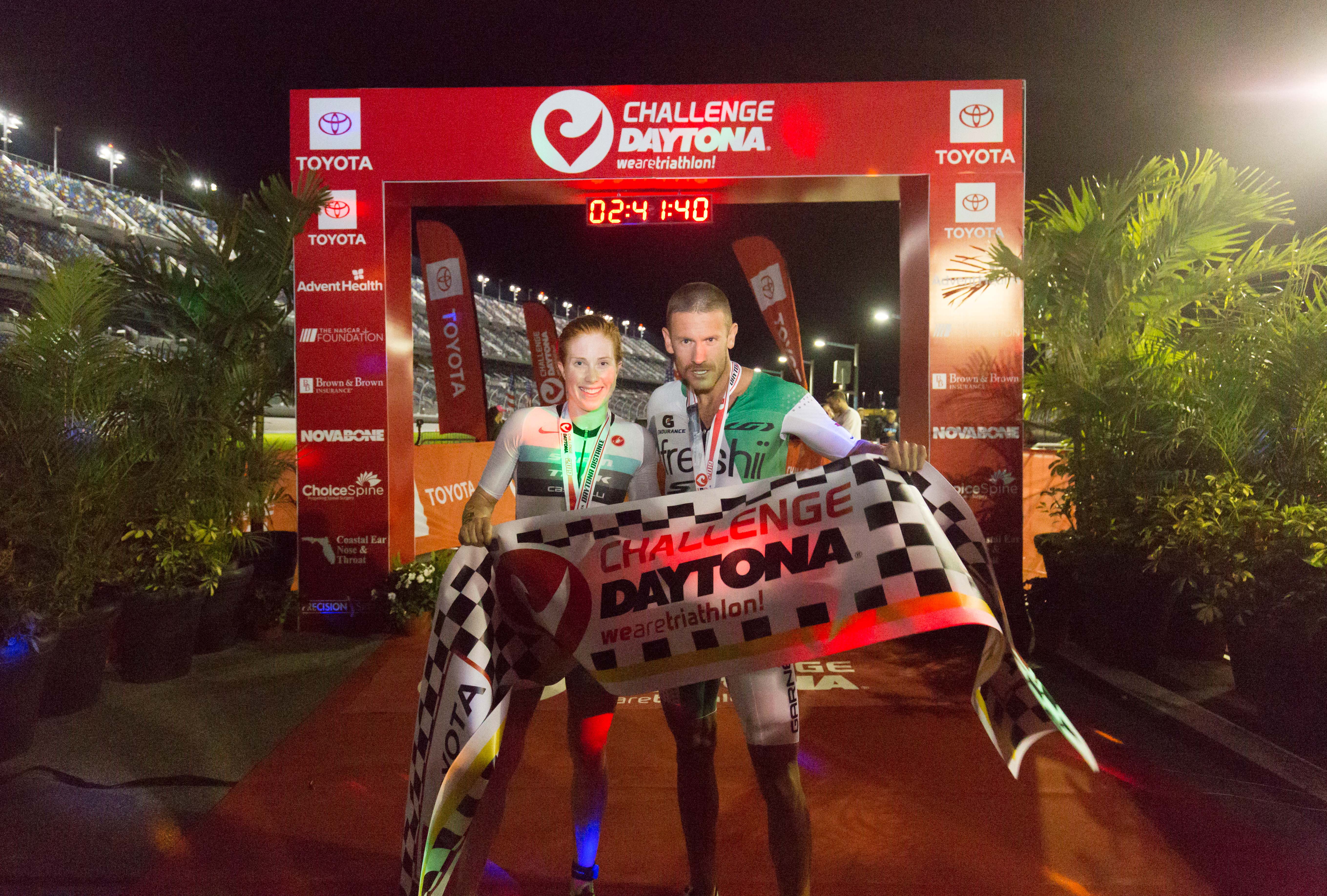 With such an amazing strong pro field at the start line of CHALLENGEDAYTONA, it wasn’t far from expectations: this race turned out to be very exciting for both men and women. At the men’s race it was Lionel Sanders from Canada who claims victory, after beating Spanish Pablo Gonzalez Dapena in a final effort on the run. At the women’s race Paula Findlay turned out to be the most powerful athlete of the day: she ran away from fan favourite Lucy Charles and takes last victory of her 2019 season.

CHALLENGEDAYTONA of course took place at the iconic Daytona International Speedway® at Daytona Beach, Florida and includes a 1 mile swim, 15-lap 37.5 miles bike and then an 8.2 miles run. After the men’s swim five athletes came first out of the water: Eric Lagerstrom, Kieran Linders, Pablo Gonzalez Dapena, Jason West and Joe Maloy. Other favourites like Andrew Starykowicz and Lionel Sanders came out with a disadvantage of +0:40 minutes and +1:20 minutes.

While Dapena and Maloy started pushing it hard on the bike, it were Sanders and Starykowicz pushing even harder and making their way up to the front. Halfway during the bike ride they catched leader Dapena, after Maloy had to let him go already before, and then it was Starykowicz who took the lead. After a very strong bike ride, where paces of above 30 miles an hour were very common, it was the American ‘Starky’ headed first into transition area, followed less than one minute by Dapena and Sanders.

See also:  Riveros and Sanders take the first race of the year in Chile

‘It was absolutely insane running?’
That’s where the real excitement started. It didn’t took Dapena and Sanders long to take over Starykowicz, heading right to the finish head to head at an amazing pace. Both athletes were running spectacular fast, watching each other and pushing their limits. In the final mile it was Sanders who made the difference and heading solo to the finish. After 2:23:02hr he crossed the finish line. “There has never been a runner as Pablo, who pushed me so hard like this. How in the world I missed such an amazing athlete? It was absolutely insane running. I pushed as hard as I can on the bike if there was no run after, but unfortunately we had a battle then. I only knew I was about to win with 100 meters to go. It was one of the best races I’ve ever done, so this one is always going to be a special memory in my career.”

Women’s race spectacular as well: Paula Findlay on fire
Just like the men’s race, also the women’s CHALLENGEDAYTONA race turns out to be very exciting. As expected it was British Lucy Charles who dominated the swim and therefore coming out first after her one mile in the water. More than half a minute later it were Sara McLarty, Paula Findlay and Lisa Norden following as first chase group, still in the right spot to play a role of difference.

While Charles was pushing on the bike, she didn’t manage to maintain her lead. After about 20 miles Findlay and Norden caught up with her, creating a leading group of three. Charles was first checking out what’s going to happen, but at the end of the bike she pushed her pace a little bit higher, dropping Norden, while Findlay was the only one capable of following.

‘A venue like this helps for sure’
During the run, both women were going head to head, racing for victory. At the end it was Findlay who made her final move and crossing the finish line first in 2:38:47. “I didn’t expected to win at all, but you never know with such kind of a format. At the same time I was very confident about myself and I felt relaxed on the run. Most of the time I was focussed and I felt like I was in control. A venue like this helps for sure, it’s overwhelming. Racing here, in the dark, was really cool and I obviously never going to experience something like this in triathlon.”