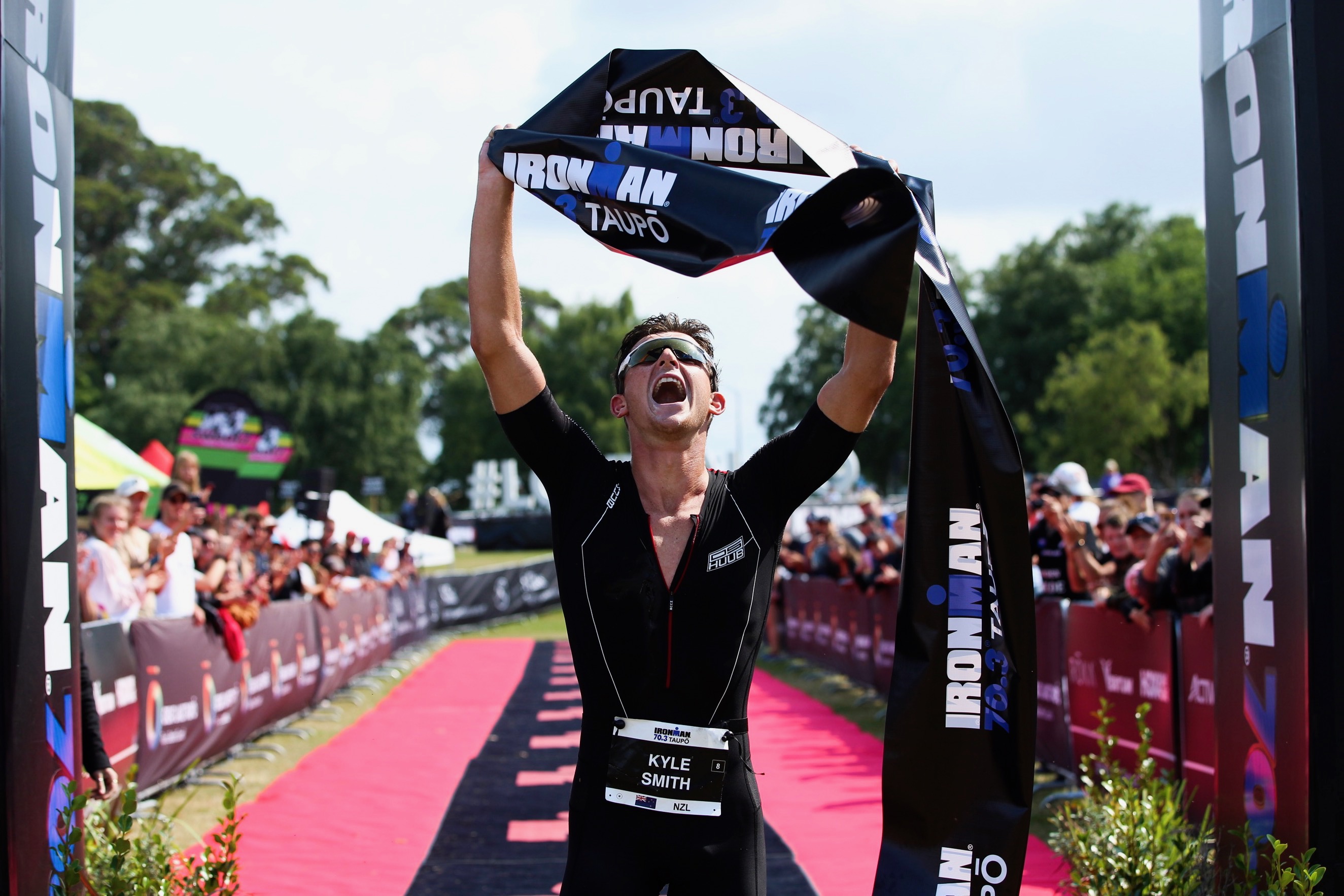 Long-distance triathlon’s next generation put the old guard on notice today <<sub: Saturday 7 December>> at IRONMAN 70.3 Taupō, with 22-year old Kyle Smith taking out the men’s pro race in a time of 3:49:23.

He was closely followed by 24-year old Max Neumann from Australia just 20 seconds later, while 22-year old Hayden Wilde from Whakatane rounded out the ‘millennials’ podium in a time of 3:52:39.

Smith and Neumann played a tactical game of cat and mouse right from the swim exit, with Wilde putting in a solid effort on the bike to try and catch the flying leaders.

Smith hit the run with a small lead of 26 seconds over Neumann, eventually winning the battle of wills to cross the finish line in first place.

An emotional Smith credited his hometown support – and the inspiration of Wilde – for the win at his debut 70.3 distance. “I was really suffering for the last three kilometres and I was seeing stars. I don’t think I would have made it home without the crowd support – everyone shouting my name got me there.

“I didn’t know what to expect. I knew it was going to be a hard day and I went into it with full respect for the distance, and for the other competitors.

“It’s been a hard year with lots of ups and downs, sickness and injury which has been eating away at me. I’ve worked so hard…to have that recognised by lifting the tape…is just amazing.”

Smith says he’s looking forward to tackling the course again at the IRONMAN 70.3 World Championship in Taupō in 2020. “The course is amazing. I’ve been riding those roads since I first started in triathlon and you can’t beat the run by the lake.”

A visibly exhausted Neumann acknowledged he’d given everything to the race.  “Kyle and I got a gap on the rest of the field from the beginning of the bike and we managed to hold that gap the whole way.

“I thought I’d be able to come back at the end, but I think we were both completely in the hurt box. I simply closed my eyes and ran down the home straight.

“I’m happy to end the season here – I would have loved to win but I couldn’t give any more. I’m going to have to time my season differently next year, so I am fully fresh when I line up for the worlds.”

Meanwhile, Olympic-hopeful Wilde says his half-distance debut was “good fun”, despite dropping his bike in transition and losing his chain and a shoe in the process. “That put me 30 seconds back on the lads and I needed to be careful not to blow up. I had to play it conservatively.”  Wilde says he’s disappointed not to have qualified for the IRONMAN 70.3 World Championship today, as his 2020 season – which includes a tilt at Olympic qualification – will likely prevent him from gaining a slot elsewhere.

“Today sets me up well for the Olympic distance and I’ve definitely picked up some endurance gains from it. You have to respect the distance and four weeks training after the ITU season just wasn’t enough.

“But I wanted to come here and it’s great to be on the podium.”

What Are The Best Swimming Goggles For You? | How To Choose A Goggle Lens Color
November 20, 2018
Posting....