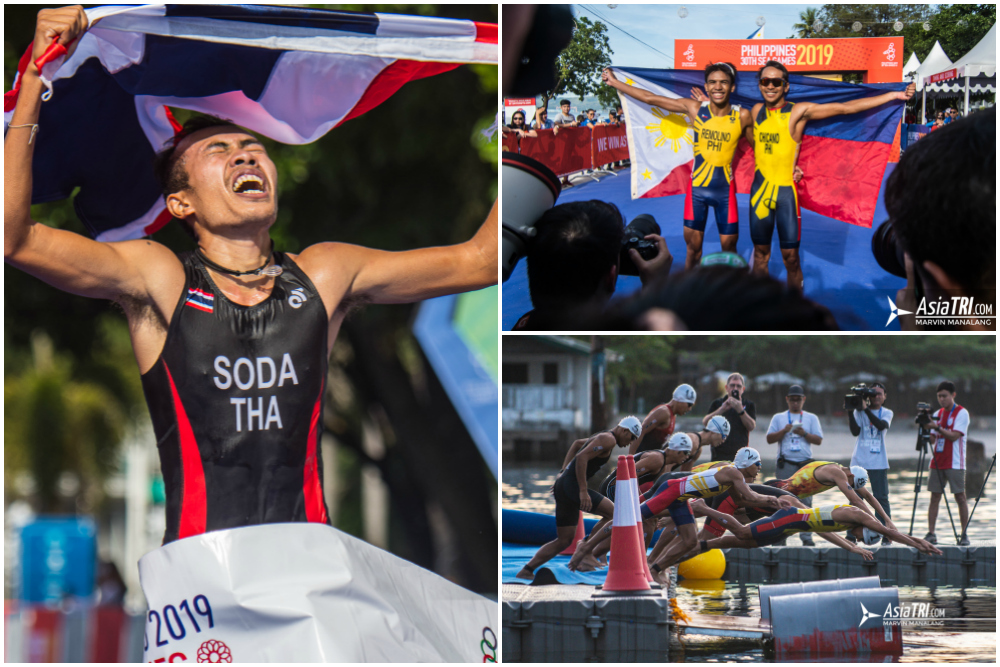 It has been nearly two weeks after the triathlon and duathlon events has officially ended at the 2019 Southeast Asian Games, and the forecast held true:  The Philippines is still the king of multisport in the Southeast Asian region.

Philippines still the King of Triathlon in Southeast Asian Games In the mens individual triathlon event, John Chicano won the Gold in a blazing fast time of 1:53:26.   Chicano has also won Silver in the Kuala Lumpur games in 2017.  The dynamics of race tactics with two strong teammates working together in the bike worked again for Team Philippines.  Another strong Filipino triathlete and the youngest in the field at 19 years old,  Andrew Remolino, made his debut in the SEA games.   Remolino was first out of the water, but with Chicano the stronger cyclist, the latter was able to close the early gap.   The lead pack though was not exclusive to the Filipinos as surprising Indon triathlete Muhammad Ahlul Firman was able to stick throughout.  As part of race tactics, the Filipinos were able to make the Indon pull harder on the bike, and it showed on early the run leg.  After only two laps, Chicano was the runaway leader, with Remolino a safe second, a good 2 minutes away from Ahlul Firman. In the womens individual event, The Philippines’ Kim Marion Mangrobang successfully defended her 2017 crown, grabbing gold, 3 minutes ahead of teammate Kim Kilgroe.   The pair quickly distanced themselves from the pack in the swim, worked together on the bike and simply ran away from the field.   Indonesia’s Nethavani Octaria was a far third for Bronze, a long 11 minutes and 31 seconds gap from Kilgroe. Expect the Philippines to still rule the individual events in the next SEA Games in Vietnam; Chicano is not going anywhere, and young Andrew Remolino is poised to be the future of the team, and will definitely work to be stronger on the bike.  Indonesia’s Ahlul Firman poses a challenge, and proved he can compete at the swim and bike leg–he was with the lead pack in T2, but has to significantly improved his run in 2 years to break the Philippines’ hold of 1-2.

If based on the time gap from the results of the women’s race, the duo of Kim and Kim are still head and above ahead of the competition.  The Filipinas are still the best in each leg, first out of the water (Thai Thipsuda Kammee kept pace on the swim but struggled on the bike), strongest at the bike, and the fastest runners on the field.  Expect the pair to be back on the Vietnam games.

In a bid to make triathlon a truly-spectator sport, ITU introduced the format in 2009 and has since become one of the favorite to spectate with the fast, explosive and exciting racing.   It will debut as an Olympic event in the Tokyo 2020  games.

No surprises here as the Philippines copped Gold  led by  Chicano and Mangrobang.  2015 gold medalist Claire Adorna and new find Fernando Casares completed the squad and finished with a time of 1:33:47 (Distances: Swim 300m (2 laps); bike 6.6 km (1 lap); run 1.8 km (2 laps)  The run distance for the 4th athlete is 2 km in two laps), a clear 4 minutes and 11 seconds ahead of Silver-winning Team Singapore.   Singapore fielded a team of 3 teenagers and a 22 year old (Herlene Yu, Emma Middleditch, Luke Chua and Bryce Chong) with the goal of giving the squad critical exposure and experience.  This is the long-view approach Singapore triathlon is trying to execute and hopefully will pay dividends in the coming SEA games.  The young squad will definitely improve as they tackle the longer individual event. Duathlon is back at the SEA Games

While the prevailing feeling beforehand was Duathlon will still be in the host Philippines’ realm to rule–they were seeded first in all 3 duathlon events–the results was mixed for the Philipines and pretty impressive for Thailand, Indonesia and Singapore.  Indonesia’s Jahauri Johan, one of the oldest in the field at 36 years old and a veteran at Indonesia’s national team  surprised and proved to be the strongest runner of them all–both clutching the best 10k and 5k splits–to bring home the Gold.   The Philippines’ Joey De Los Reyes and Thai Nattawut Srinate bagged Silver and Bronze.   Monica Torres of the Philippines lived up to her billing as a multiple Powerman Asian elite champion, bagging her first SEA Games Gold medal with a win in the women’s elite category.  Thailand’s Sonsem came through with Silver, a good 2 minutes and 34 seconds back while Vietnam pulled through with a bronze courtesy of Thi Phuong Trinh Nguyen. Again, the mixed relay duathlon category race was fast, exciting and involved multiple lead changes.   Thailand led almost throughout, but relinquished the lead to Singapore on the third relay leg before securing the Gold on the anchor leg.  Thailand finished the duathlon events with a Gold, Silver and Bronze, the same haul with the Philippines.   Team Singapore will be happy with the Silver result from the young mixed relay team.

With the Southeast Asian Games moving to Vietnam in 2021, triathlon will surely be included–being a certified Olympic sport, and with a bronze medal showing by a Vietnamese athlete, hopefully Duathlon won’t be scrapped off the roster.

The Philippines’ wealth of talent is still an envy among its SEA neighbors–the Philippine multi sport calendar is not lacking in events, from the newbie events up to the top-tier branded events like Ironman–the Philippine grassroots program has a solid base to work with.  Such as the case with Remolino, who was an elite regional games swimmer in 2017, and has transitioned fast as a Silver medal-winning triathlete in a little over 2 years.

Singapore and Indonesia are on the right track, and will judge their overall performance as a positive.  Thailand’s performance will only get better as the popularity of multisport is peaking at the same time.  Vietnam got a bronze on their debut in multi sport events in SEA games, and along with the growing popularity of triathlon in their country, will only mean well with their federation’s search for new talent.

Malaysia, which was second to Philippines in the all-time medal tally in Triathlon and Duathlon, was seemingly quiet in their performance on this SEA games edition.  Perhaps with a new leadership in placed in their federation, the program can bounce back and perform as they did before in these games.