McElroy leads a podium sweep for USA in Santo Domingo 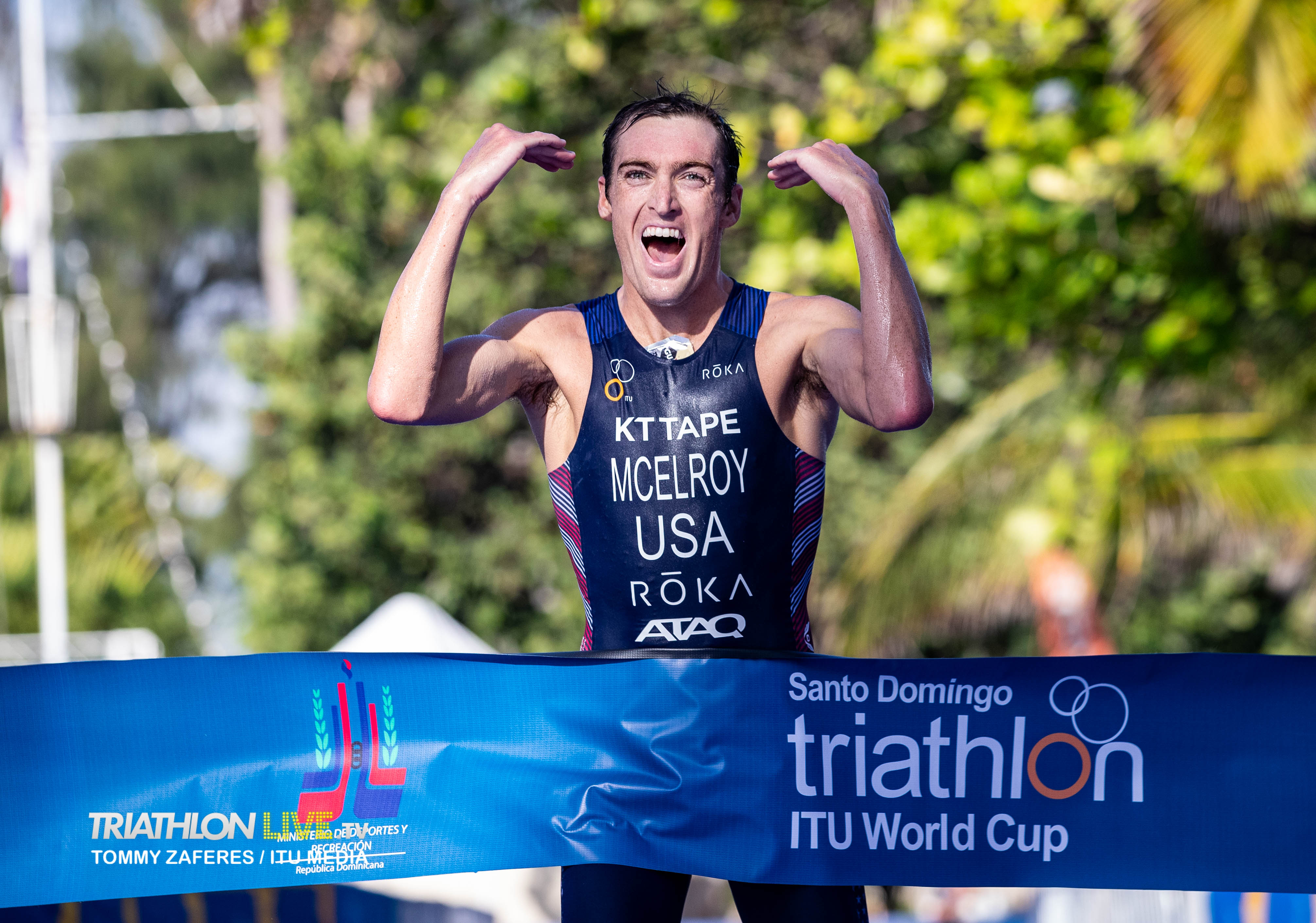 The season for the USA men couldn’t finish better. After a dominant run in the 10km run along the Caribben sea, Matthew McElroy led an impressive podium sweep for the USA men in the 2019 ITU Santo Domingo World Cup, followed in the finish line by Kevin McDowell and Morgan Pearson.

With the athletes taking an early start due to the high temperatures in Santo Domingo this weekend, it was to no surprise that the athlete that was able to deal better with the wavy waters of the Caribbean was Richard Varga (SVK). The Slovakian mastered riding the waves four times, twice to get in and twice to get out in the two laps circuit of 1.5km in the Sans Souci Beach, with only Igor Polyanskyi able to follow him.

By the time they both got to the first transition, tho, they were chased by a large group that immediately formed a large front pack of men and established themselves early to lead the race. Behind them, a second pack led by Irish Russel White was trying to keep contact, while far behind out of the water was one of the athletes most eyes were focused on: Cameron Wurf (AUS). An excellent biker, the Aussie had a complicated swim that left him with no options, while the leaders kept pushing to increase the pace.

Halfway through the 40km flat course in Santo Domingo the large leading group was working together in turns to manage the 180 turns at both side of the circuit, with most of the big names included in the pack. Adrien Brifford, Sylvain Fridelance, Manoel Messias, Irving Perez… they all were taking turns to lead the group until the time difference with the chasers was more than 2 minutes.

With the large group arriving together to the second transition, it was Matthew Sharpe (CAN) and Brifford leading the men out in the first meters of the run, but quickly the American squad approached and never let them opened a gap. As soon as the leading men were done with the first little climb to get out of transition, it was three Americans (McElroy, McDowell and Pearson) and three Swiss (Max Studer, Florien Salvisberg and Fridelance) running together, with the Sharpe, Perez and Ilya Prasolov (RUS) fading behind them.

See also:  2020 Ironman and Ironman 70.3 World Championships: Will They Push Through?

The Swiss were able to stay with the Americans for the first two laps, but passed the 5km mark MxElroy added an extra gear to open a bit of a gap, only to be followed by his countrymates Pearson and McDowell. And together they rode for the final kilometers, looking at each other, no words to be said. It was when the venue was on sight in the last lap when McElroy decided to do his final move, sprinting with 700m to go with no one able to follow, and not looking back until he cross the finish line to claim his third consecutive World Cup win of the season.

Behind him, McDowell passed Pearson to claim the silver medal to cap up the season in style, after the bittersweet 4th place last week in Lima and the third place in Tongyeong. To be consistent with the Americans topping the top positions in the start list in Santo Domingo, Pearson grabbed the bronze medal to give USA the first-ever podium sweep in a men’s World Cup.

The Swiss managed to finish in the next three positions, with Studer crossing the finish in 4th, followed by Salvisberg and Adrien Brifford, with Canadian Matthew Sharpe in the 7th place and Japanese Odakura Makoto closing the top 8.

For McElroy, the race unfolded as he had planned from the beginning. “To be honest, that was the hardest swim I have ever done. I thought I was having a terrible swim but I came out the back of the front group”, he explained. After riding in the leading pack for the 40 km ride, the run was “pretty relaxed, almost the whole run. I knew those guys were strong. I wanted to sit and make my move about 1km out, and I was able to do as I wanted. It all comes down to having a good team, Having a good support team, family and friends is what makes the difference. I am having fun and enjoying the races now”, he said.

See also:  Women For Tri Announces 20 Races that will Provide a Total of 500 Additional Women The Opportunity to Compete in the 2020 Ironman 70.3 Worlds

“It was incredible coming in in the second place”, explained McDowell. “I think we wanted to make sure we made it all three of us on the podium. The focus was running together. Today was all about conserving until the end. It was about being patient.I have been so close to so many podiums, and today I really tried to change the mind game. I am pleased with second and it’s a great way to finish the year”, he said.

Also extremely happy was Morgan Pearson, with his second world cup podium of the season. “It was a good race for me, I actually had a nice swim and was in third the whole way. I have been working hard on my swim this year so I am happy that it’s showing in races. Then on the bike I was trying to relax and conserve the energy. I thought I did a good job moving to the front, I was happy with that. On the run, I just don’t think I have the strength over the 10km. I thought I was in good shape but I think I am more suited to the shorter distance. I have no shame losing those guys but you always want more for yourself if you don’t win but I am happy for the team”, explained.