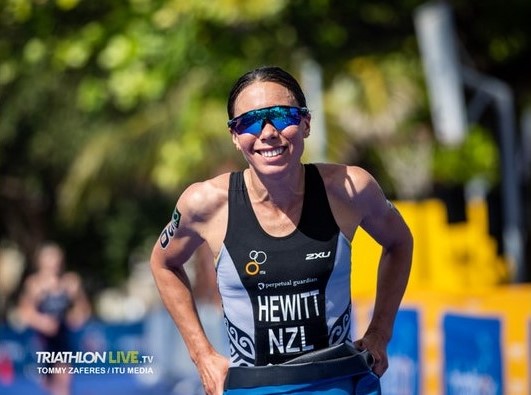 The look on her face when Andrea Hewitt (NZL) crossed the finish line was of unlimited surprise. The second she realized she had just won the 2019 ITU Santo Domingo World Cup tears came to her eyes, and she had more than enough reasons to do so. For her incredible come back to the ITU circuit after a difficult season with not much racing all over the year, for her unsuspected win after the leader until the final 100 meters had to serve a penalty, and because four years ago today was “the saddest day of her life”. USA’s Taylor Knibb managed to finish in second place despite the penalty, with Mexico’s Claudia Rivas claiming bronze.

65 women lined up under the sun in the Sans Souci beach in Santo Domingo for a race that had the run segment shortened to 5km due to the high temperatures. The beach start proved to be once more impressive, with athletes dealing with 1 meter waves to get in the warm water of the Caribbean, and it was Zsanett Bragmayer (HUN) the one who managed to get in front of the pack from the first strokes. The excellent swimmer was first out of the water in the first lap, followed by Anastasia Gorbunova (RUS).

It was in that first lap when the race started to unfold, with two of the favorite athletes, Ai Ueda (JPN) and Lisa Perterer (AUT) falling way behind the leaders, with still a second lap of 750 meters to go. With a field spread out but Bragmayer maintaining the lead, Kirsten Kasper (USA), Taylor Knibb (USA), Anna Godoy Contreras (ESP), Andrea Hewitt (NZL) and Barbara Riveros (CHI) among others quickly pushed to break away from the pack.

Even though the leaders never managed to work together smoothly, and with Riveros taking the responsibility of pushing hard in front of the pack, the group managed to have a bit over a minute over the chasers, and more than 2 minutes with Ueda and Perterer, two of the strongest runners in the field. And when it all came to the run, it was Hewitt the first to strike leading the athletes out of the second transition.

Right on her heels were Knibb, Godoy Contreras and Rivas, with the American quickly taking the lead. She knew then that she had to serve a 15 seconds penalty for leaving equipment outside the box, and it was her choice to serve it in the first or the second laps of the run. Halfway through the run, Knibb tried to break away, on a last effort to open a gap of more than 15 seconds that could give her the win, with Rivas, Hewitt and Godoy Contreras always close behind. But the American never managed to open a sufficient gap, so when she stopped at the penalty box, just a few meters before the finish line, she could only look hopelessly to Hewitt sprinting to take the tape.

The Kiwi, whose last victory was in the World Triathlon Series in Gold Coast in 2017, looked a mix of confused and thrilled when she crossed the finish line, still digesting what had just happened. “It was crazy out there. I didn’t know that Taylor (Knibb) had a 15-second penalty. I didn’t know until that last corner that I saw her in the penalty box. I was in third at halfway and I had two girls on my back. I was running for the podium but then I found myself in front of the tape. I didn’t even know that I had won today”, she said. Hewitt, whose fiancee Laurent Vidal died just four years ago today, couldn’t help the tears. “For me it is crazy to also have to celebrate (the victory) today, on a day like today, because today is the anniversary of the saddest day of my life”, she explained.

Knibb managed to finish in the second place despite the penalty, to wrap up the season with a world cup podium, the only one she has got in 2019. “I was planning to serve the penalty on the first lap and hopefully catch up with the leaders and race from there but one of the coaches said to take it on the second lap. I had about 100metres to process it and then I decided to take it on the second lap because when I am racing I don’t look at the penalty board so I was hoping that Andrea (Hewitt) and Claudia (Rivas) didn’t see that I had a penalty. I expected to be sprinting in for fourth of fifth place so it’s better than expected. And for Andrea to finish ahead of me, you could not ask for a better person to beat you”, said Knibb.

The bronze medal was for Rivas, sprinting Godoy Contreras on an unexpected comeback to the top positions after her 7th place in the 2016 Rio Olympics. She was the best Mexican of the day, with the team performing brilliantly under the heat to have Cecilia Perez in the 5th place and Lizewth Rueda Santos in 6th. USA’s Kirsten Kasper ended in the 7th position, with another Mexican, Jessica Romero Tinoco capping up the top 8.

Santo Domingo wraps-up the ITU 2019 World Cup season, with the 2020 World Cups starting next year in Cape Town in February.