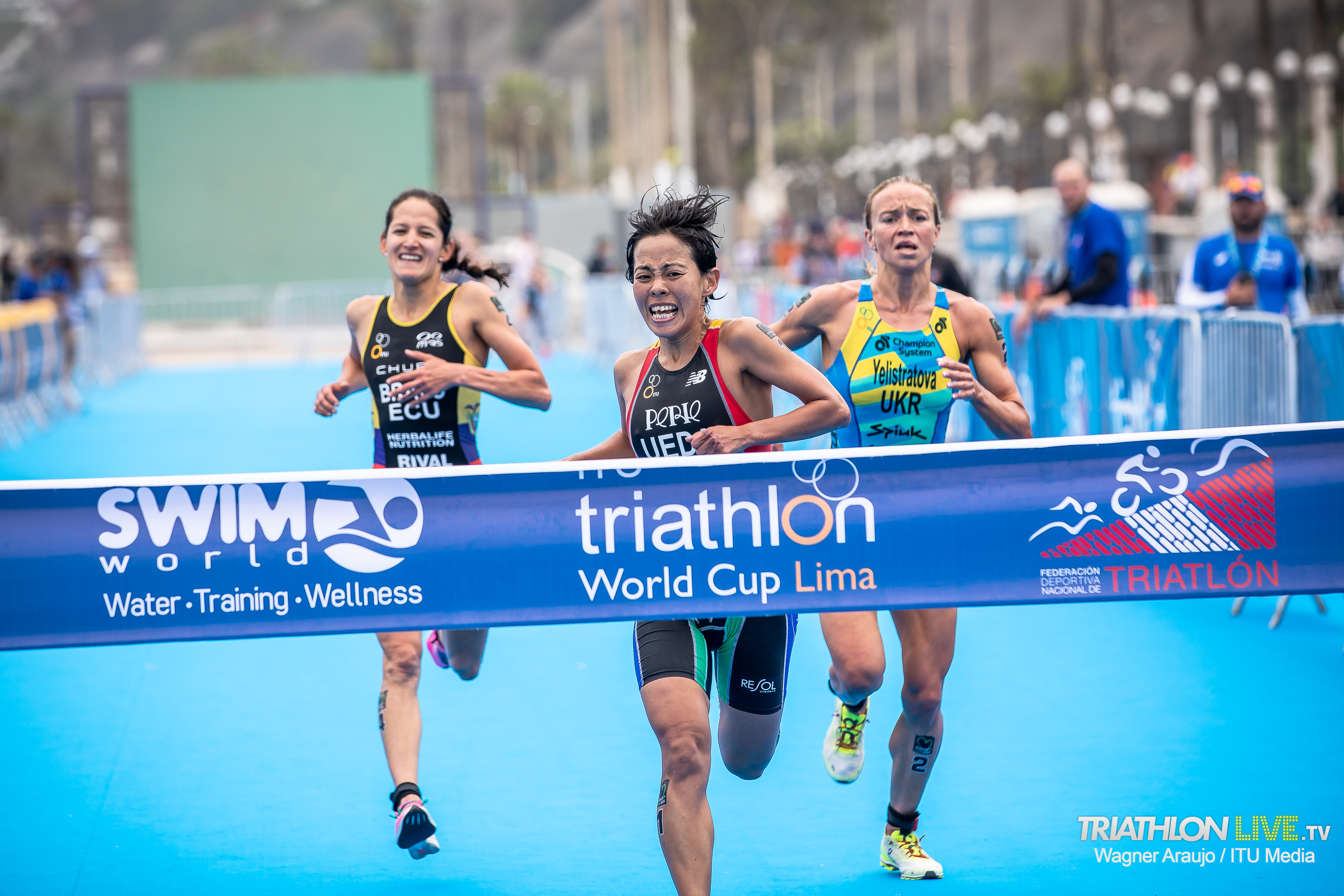 The first ever Lima World Cup took to the Peruvian capital’s Playa Agua Dulce on Sunday morning for the penultimate race of the 2019 calendar. Over the sprint distance course Japan’s Ai Ueda showed no signs of fatigue after her gold in Miyazaki and silver in Tongyeong, out-sprinting Yuliya Yelistratova (UKR) and Elizabeth Bravo (ECU) to take the tape once more.

“To continue with another win makes me so so happy, it’s a big surprise,” said Ueda. “It’s been a tough schedule but today was really enjoyable, thanks to all those who were cheering for me.”
—

It was a grey morning as the athletes took to the line, race number one Ai Ueda assuming position on the right of the start and despite giving herself a longer route to buoy one, she kept out of trouble while Hungarian swim specialist Zsanett Bragmayer led the field.

USA’s Sophie Chase also delivered an impressive 750m, Barbara Riveros (CHI) and Elizabeth Bravo (ECU) equally swift through the water but as the athletes came out of the surf it was Tereza Zimovjanova (CZE) and Bragmayer who were able to catch a wave in and open up a useful little window into T1.

Riveros and Yuka Sato (JPN) were next over the mount line some 10 seconds back followed by a mass of athletes including Romina Biagioli (ARG), Mengying Zhong (CHN), and Cecilia Perez (MEX), Ai Ueda at that stage some 10 seconds behind.

The four-lap ride opened up with Zimovjanova looking determined to extend the gap, but Perez was right onto the leaders’ back wheels and behind her the collective effort of the chasers saw a big pack come together before the end of lap one.

With such a large train of athletes and nobody eager to roll the dice, the likes of Andrea Hewitt (NZL) and Erika Ackerlund (USA) were well placed, but it was Bravo doing the lion’s share of the work and seeing if anyone would push on with her.

Lisa Berger and Xisca Tous were also going well on the bike and moving to the front as T2 approached, but it was Ueda who flew out first, Bragmayer hanging onto her shoulder, Hewitt also among the front ten as they became more organised.

Ueda was attacking in the manner her form allowed, but Bravo, Yelistratova, Chase and Perez had other ideas and soon surrounded her, while Hewitt, Amy Sloan and Romina Biagioli‘s challenges faded just behind. Perez then fell back, the American Chase doing likewise at the final turn of the second lap as Ueda again asked the question.

Bravo looked good for the silver as Ueda bounded towards the tape, but it was a well-timed last surge from the Ukrainian that saw Yelistratova take silver, the Ecuadorian with bronze. Chase crossed the line in fourth followed by Perez, Sloan just edging out Hewitt to sixth, Romina Biagioli in eighth.
—

Full results will be available here