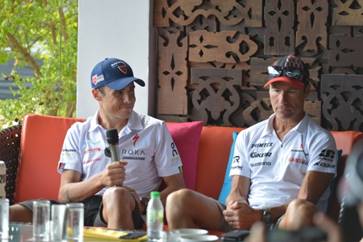 LANGKAWI, 24 October 2019: The excitement for the 2019 IRONMAN Malaysia in Langkawi continues to heat up as a plethora of activities are already happening to serve as the ideal appetizer ahead of race day in two days!

The countdown to the world’s most iconic single-day endurance event on Saturday, Oct 26 is already ticking, and here is the daily recap from some of the events that transpired in the last 24 hours.

There was great camaraderie and insights breakthrough at the Women For Tri panel discussion on Thursday.

The panel speakers made up of Katie Kyme, Amelia Shelton, Nur Zarina, Christine Loh and Cheryl Tay all recounted their own personal experiences, and what stood out was how IRONMAN helped them overcome adversity.

Australian Pro Athlete Katie Kyme has been an ardent IRONMAN supporter since her teens, when she would watch the IRONMAN World Championships with her brother.

Severe health conditions several years ago never diminished her love for triathlon, and she was at IRONMAN Malaysia to share her story.

“I was diagnosed with brain cancer some years ago, and I was fortunate to have overcome it, but recovery took 10 years,so I had to be patient in that process. Once my health got better, I could start with blocks of trainings,” said Kyme, who eventually went on to get her professional card.

Residing in Langkawi for the last 5 years, Dr. Amelia Shelton’s biggest barrier was getting motivated from a taxing job as a dentist which took up a lot of her time.

The turning point came when she learnt that medical practitioners where she resides are most prone to non-communicable diseases like high blood pressure and diabetes.

“I needed to practice what I preach and make the time to get out there. Langkawi is a beautiful island, and so it wasn’t like I was out there doing a chore. I wanted to see the sun, smell the salty sea air and just be out there,” said Amelia.

“Having an indoor trainer also helped a lot. I’d cycle before going to work, and then run after work. My colleagues saw my determination and offered to do the weekend on-calls for me, so that I could train longer hours.”

Amelia also had a word of advice for women who are going through their menstrual cycles while training.

“Give your body at least a day’s rest, because hormones can fluctuate. You need to know your body well, but don’t take a long break.”

Christine Loh has become an ‘iron-woman’ to her family, from supporting her IRONMAN-fanatic husband to joining him on this journey and competing at the 2019 IRONMAN Malaysia for the first time with her children.

“When we have a bigger objective in mind, we can pull the trigger. I started by following my husband, and after that my kids were inspired and also started following. There were sacrifices to be made, but I am happy that I went through with it” said Christine.

Training and competing in full hijab gear can be challenging, especially in a tropical climate like Malaysia, where the heat can be intense and other competitors are dressed more freely.

But for hijabi triathlete Nur Zarina, pushing her physical limits in an attire which conforms to religion, and giving her best is a different experience altogether.

“It’s not a problem at all. I compete with a sports scarf with thin material, and it dries fast,” said Nur Zarina, who also shared about overcoming her fear of swimming.

When I was younger, my mom always told me not to swim as I would drown. And when I started swimming, I used to do it with my eyes shut because of the fear of piranhas and sharks!”

“A lot of people had also discouraged me, but I set my mind to do it and now I’m here competing at an IRONMAN (event).”

Singaporean Cheryl Tay had battled with body image insecurity when she was younger, in an attempt to be skinny.

“I used to run almost 27 kilometres a day to get skinny. When I failed to stick my diet, I self-harmed. Then I realized I am only hurting myself, and I started to discover what my body can do,” recalls Rock the Naked Truth Founder.

“I got introduced to weightlifting, and after that triathlon. It was one of the best things that happened to me.”

Also present at the panel was Elle Adda – the French Filipina international concert vocalist who has worked alongside Grammy award winning artistes such as Sting and Chris Botti.

The Disney music vocalist, who is a fitness enthusiast with several IRONMAN podium finishes serenaded the crowd with a song titled ”Being Alive”  to inspire them ahead of race day

Since its inception in 2015, Women For Tri has seen an 18% increase in female participation in IRONMAN & IRONMAN 70.3 events, which now totals to more than 71,000 female athletes globally.

The triathletes who converged at Langkawi gained a massive boost following a valuable meet-and-greet session with three-time world champion Craig Alexander, who has been and will be one of the commentator for IRONMAN Malaysia throughout the week.

The Australian, who is also IRONMAN’s ambassador in Langkawi is now contributing back to the sport after becoming three-time world champion in 2008, 2009 and 2011.

Alexander, 46, spent time taking pictures with fans ahead of the gruelling race day, and had shared valuable advice during the meet-and-greet session.

“It is great to receive recognition in a sport we all like to excel in. So it doesn’t matter if you have been in the sport a year or two or 10, the challenge is to keep going,” said Alexander.

IRONMAN Malaysia 2019 also witnessed another world champion in the form of Javier Gomez.

The 36-year-old Spaniard is a long distance specialist and king of triathlon at the 2019 ITU Long Distance Triathlon World Championships in May.

He is looking forward to the Langkawi race, which he described as ‘not the fastest, but one of the toughest.’

“I’ve heard about how challenging this race can be in hot and humid conditions. I’m competing at the Tokyo Olympics next year, and the conditions here will provide a good learning experience,” said Gomez, who already likes the island.

“I like the course; the atmosphere is great and the locals are friendly. I’m hoping for a great race on Saturday.”

A total of $25,000 USD prize purse is up for grabs for the Professional with each winner taking $5,000 USD each.   The elite champions also receives slot for the 2020 Ironman World Championships in Kona, Hawaii.  For the age groupers, 50 qualifying slots will be awarded to top age group winners.