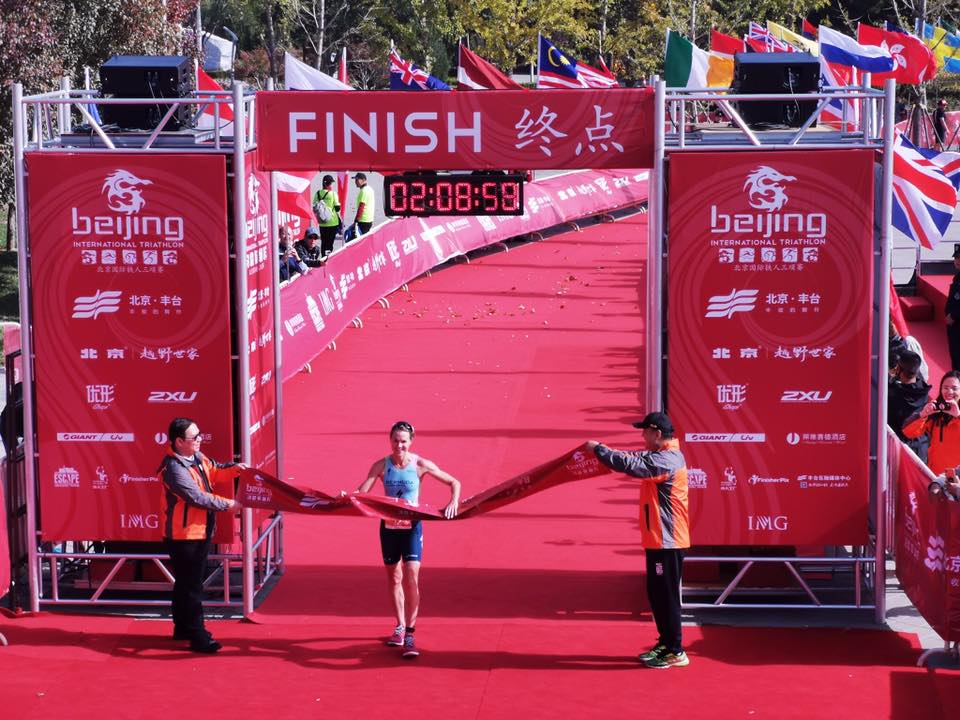 Mario Mola from Spain and Flora Duffy from Bermuda took first place honors in the men and women’s pro division, at the 2019 Beijing International Triathlon. Under blue skies, the two world champions competed amongst an elite professional field. More than 1,000 professional and amateur athletes from 29 countries participated in the eighth annual race, on Sunday, October 20, in the Fengtai District of Beijing.

The new draft-legal race format for the professional race division allowed racers to closely draft off one another adding intensity and excitement to the competition. Lagerstrom, Mola and Ward took full advantage of the new format and worked together to breakaway early on the bike course while Van Coevorden, Hall and Duffy did the same amongst the women.

Ward led the run out of the second transition with Mola and Lagerstrom close behind but unfortunately had to turn back 250 meters in after forgetting to put on his race belt. Once Mola had the lead on the run, it was clear it was going to be his race.

“I had a great race today,” said 2019 Beijing International Champion Mario Mola. “I was able to stay in touch with the front group on the bike the whole time. Eric, Sam and I worked well together and entered the second transition as a group. I pulled ahead within the first 400 meters of the run allowing me to take it a little easier on the stair climb which was harder than I had remembered. It was unfortunate Sam had to go back for his race belt.”

See also:  Best Triathletes of the year in Asia 2015

“This was my first time competing in the Beijing International Triathlon and I had heard this was a hard race, but did not know what to expect,” said 2019 Beijing International Champion Flora Duffy. “Coming out of the swim first felt great, but the transition run after the swim was harder than I expected. Natalie, Lucy and I worked well together on the bike course and established a nice gap, so I felt good going into the run. Running the stairs was very challenging. I am super happy to have won today, my first win in a long time.”

The race started and finished amongst the beautiful scenery of Garden Expo Park, in the eco-friendly Fengtai district of Beijing. The Olympic distance race featured a 1.5 km swim through Garden Expo Lake; a challenging 40 km bike race through the villages of Fengtai and up Qian Ling Mountain, the highest peak in Southwest Beijing; and a final 10 km run through the colorful gardens and up the steep steps of the Garden Expo Park. A sprint distance race took place on Saturday, October 19, bringing the total number of race participants to more than 1,000 as the popularity of triathlon continues to grow in China.