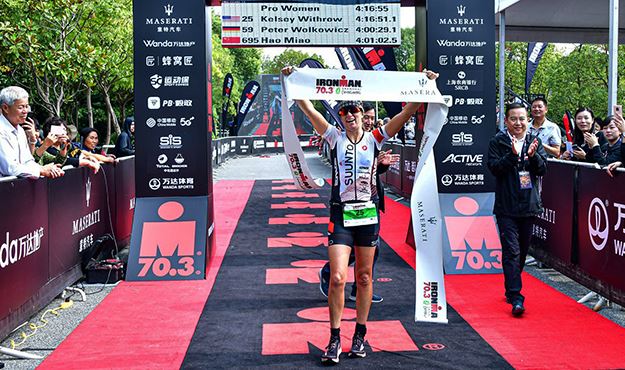 Neo pro Leigh Anderson-Voigt (AUS) pushed bravely off the front during the bike to establish a platform for a potential first victory until Portugal’s super-swift Filipe Azevedo turned up the heat during the run. He would finally prevail with a 1:14 run to claim victory in 3:47:03, but not before the remarkable 47-year-old Cameron Brown pushed him to the limit. The world’s oldest IRONMAN winner, three-time Hawaii podium placegetter and runner-extraordinaire closed within 14 seconds in the final 2kms. But Brown could not claim another running miracle despite a 1:14 effort to finish 30 seconds back in second with Anderson-Voigt holding on for third.

Earlier 2012 IRONMAN World Champion Pete Jacobs set the pace out of the water and multi world champion Tim Don was prominent on the bike.

It was more clear-cut in the women where American Kelsey Withrow was always in or around the lead before taking over on the run. She scored her fourth victory over the distance and her 13th podium in 4:16:52 on the flat and fast course on Chongming Island. The margin was under a minute to GBR athlete Frankie Sanjana, chasing a second win in the year, with New York twin Rebeccah Wassner holding on for her first podium in five years.