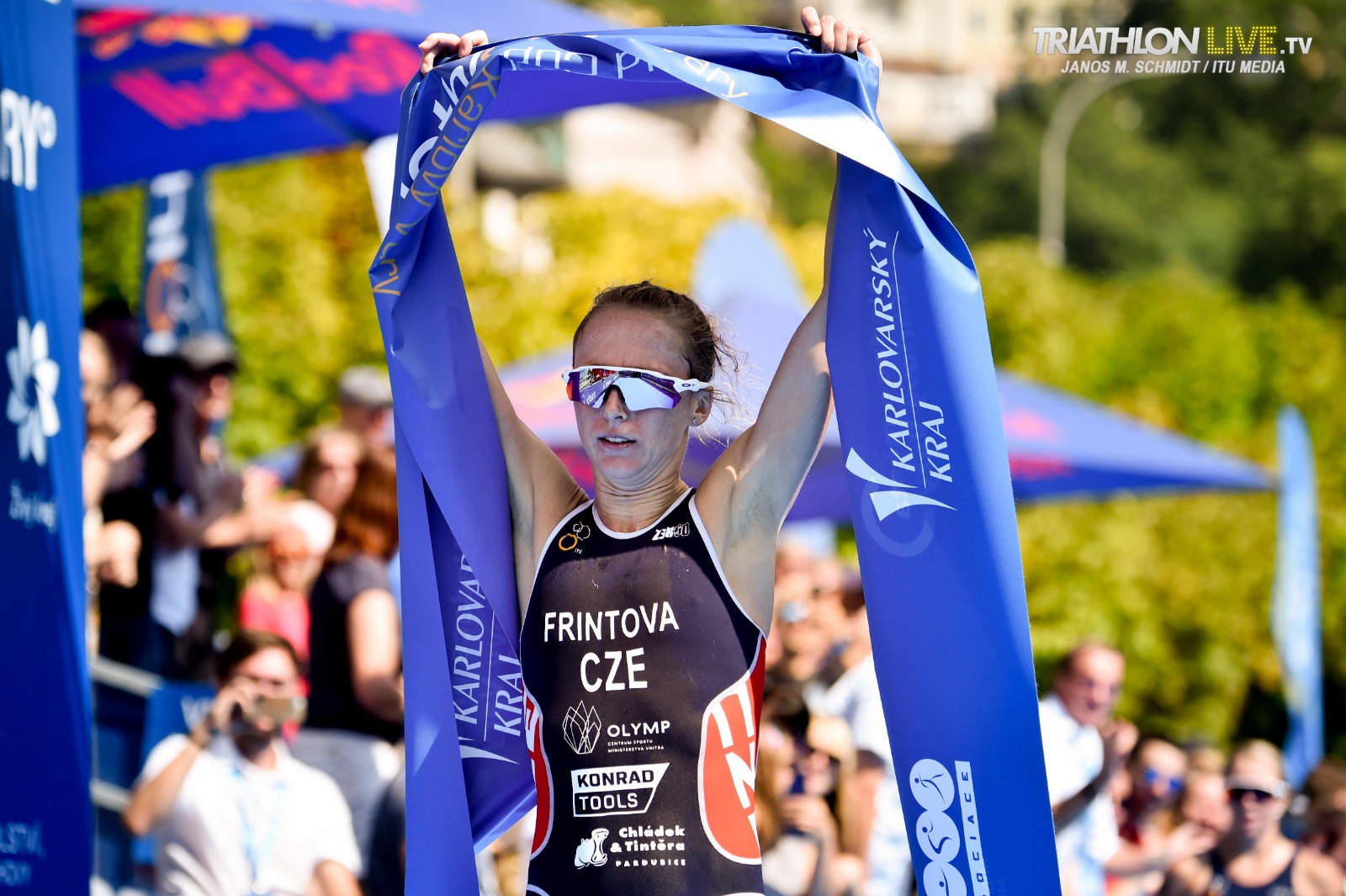 ‘I would have been really happy just to podium”, said Frintova afterwards. “I came off the pace on the swim and had a lot to do but it all came together. I had some stomach problems out there but the crowd was amazing for the last laps and they pushed me through so I was so glad to win again here. I had nothing to give really, I just had to dig in and stay there. We had a little gap after I lost contact in the water so we had to push really hard from the beginning, then the pace settled a little.”

In the men’s race, Sam Dickinson managed to find the legs over the final 2km to pull away from Raphael Montoya and produce a hard-earned gold, the Frenchman in second ahead of Dickinson’s GB teammate Grant Sheldon, back on the podium for the first time since 2013.

—
Women’s report
It was a glorious day out at Rolava Lake on the edge of the spa town of Karlovy Vary as the athletes lined up, number one Vendula Frintova next to Chelsea Burns but it was Sara Perez Sala of Spain who was the first to take to the front, Gorman and Pohle right on her heels as they dove back in for the second lap.

The snaking swim course set the tone for a race in which there was no time for the athletes to switch off, but by the time they were into transition, only ten seconds separated the top 10.

Simone Ackerman (RSA) and Anastasia Gorbunova (RUS) had also put themselves into a good position on the Spaniards wheel as the 7km ride into town saw two distinct packs emerge, Frintova leading the chasers some 20secs back. Jeanne Lehair (FRA) and Quinty Schoens (NED) were also going well as the first of seven laps of the town centre played out, Lotte Wilms (NED) showing her power on the bike too.

Each time the athletes swung back through transition, the long climb bore down on them, and it soon provided an opportunity for Frintova, Juri Ide (JPN) and Edda Hannesdottir (ISL) to haul their group up to the leaders.

With Sala always eager to take to the front, the gap to the chase pack eventually up to two minutes as the likes of Kaidi Kivioja (EST) and Justine Guerard (FRA) toiled in vain to close in.

Wilms asked the question on lap four but failed to force a break, though with each hill the pack thinned slightly. A puncture on lap five put an end to Chelsea Burns’ (USA) race, and then Annabel Knoll (GER) and Jolien Vermeylen (BEL) fell back leaving 16 riders to fly into T2.

It was Lehair leading Italy’s Ilaria Zane and Pohle out of transition, but the power of Gorman and Frintova told. They took to the front immediately and had soon carved out a 20 second lead on the first of the four laps, Pohle and another crowd favourite Petra Kurikova now clear and battling for third.

The American could not shake Frintova, pulling away for one last push at the start of lap four, only for the Czech star to reel her in once more on the hill climb. From that point the writing looked on the wall for Gorman, and with 200m to go Frintova put it all on the line to stretch away and take the tape, Caroline Pohle following 90 seconds behind for a memorable bronze after easing away from Kurikova, Yuliya Yelistratova (UKR) in fifth.

South Africa’s Simone Ackerman finished in sixth ahead of Ilaria Zane, a brilliant run from Beth Potter (GBR) seeing her over the line in eighth ahead of Carolyn Hayes (IRL).

“I knew it would come to a sprint finish and I couldn’t drop her and I know I don’t have a great sprint finish,” said Tamara Gorman. “I was pleased with my swim and felt strong on the bike despite the course, but it was testament to my past couple of weeks’ training. Now i’m super excited heading into next week.”

“It’s my second time here and i’m really happy with my first podium. I tried to keep the nutrition going in tough conditions and the run isn’t my best segment but went well,” said a delighted Caroline Pohle.

Men’s report
By the time the men took to the start line there was a stifling heat across the water of Rolava Lake, where race number one Simon Viain struggled to come to terms with the tricky swim course while Igor Polyanskiy and Richard Varga spearheaded the athletes out up the ramp and back in at the halfway point.

There, too, was Linus Stimmel putting together an excellent first segment, and by the end of the second lap in the water, Edson Gomez (MEX) was right up among the leaders, Gordon Benson (GBR), Russell White (IRL) and Collin Chartier (USA), as well as crowd favourite Frantisek Linduska (CZE) all well set to be able to create a potent group out front. Viain was a minute back at this stage, Felix Duchampt and Lukas Hollaus (AUT) also trailing after toiling in the water.

The bike soon settled into an unlikely pattern given the conditions, a huge group of 29 athletes somehow hanging in together despite the climbs, twists and turns of the tough seven-lap ride. Gaspar Riveros (CHI) and Adrien Briffod were flying at this stage too, driving things onward from the front along with Belgium’s Erwin Vanderplanke and Ryan Bailie(AUS), while Viain was able to take advantage and claw his way back in touch.

By the closing stages of the ride there was clearly no desire to make a break away, rather to conserve power for what was always going to be a demanding 10km as the mercury hit the high 20s Celsius. Taking charge out of T2 were Jorik van Egdom (NED) and – thanks to a supreme bike performance – Lukas Hollaus (AUT), but by the end of the first lap it was Great Britain’s Grant Sheldon taking the race on, teammate Sam Dickinson going with him and van Egdom hanging tough. Meanwhile France’s Raphael Montoya was building up a head of steam further back and settled in between the British duo as the Dutchman’s challenge waned.

Sheldon pressed on despite the heat, only to have the door shut on him with one lap to go as Montoya took to the front. Somehow, Dickinson dug deep once again though and early in the final lap he made his move, desperate to put as much light behind him as possible and douse his rivals’ ambition.

The move worked, too, so that by the time the head was getting loose and the control deserting him, Dickinson’s lead was already unassailable, an 11-second margin over a second-placed Montoya delighted to be back on a World Cup podium, Grant Sheldon likewise, scoring his first medal at this level since 2013.

Israel’s Ran Sagiv held on for an excellent fourth thanks to a blistering bike, Ryan Bailie, Adrien Briffod and Jorik van Egdom following him over the line.