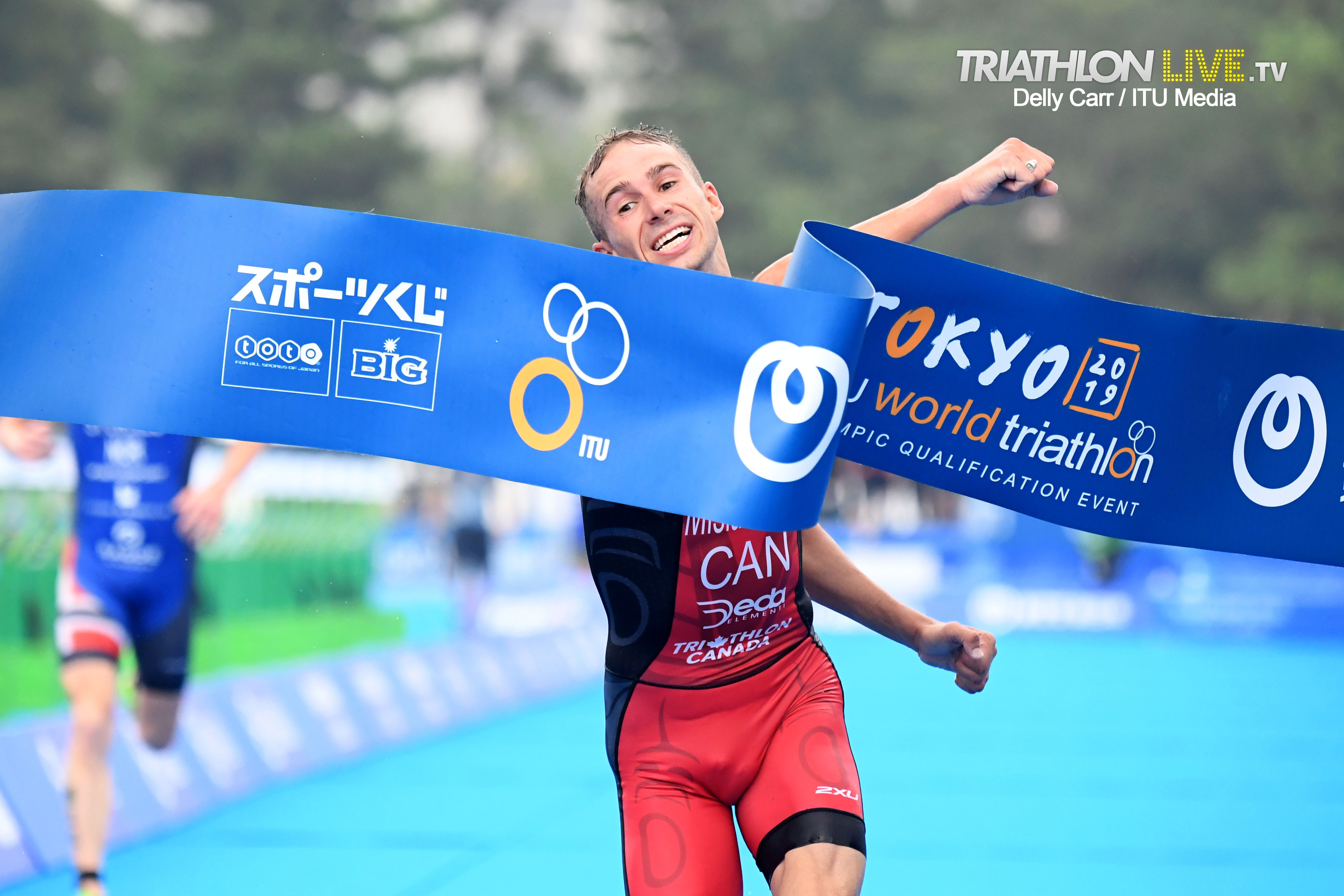 It was a day to remember in Tokyo for Tyler Mislawchuk as he took it to the all-new Olympic course in style on Friday morning. The Canadian powered to gold at the Tokyo Olympic Qualification Event, taking a huge step towards booking a place at Tokyo 2020 in the process. It was the Canadian alongside Casper Stornes (NOR) and Hayden Wilde (NZL) out front for the majority of the 10km run, but as Wilde’s challenge faded, it became a two-man surge to the line before Mislawchuk found yet another gear down the chute to secure gold.

“That’s the biggest race outside of the Olympics for me so that’s just unbelievable,” said a delighted Mislawchuk. “I had good legs on the day and I want to thank the boys out there for helping me out, we worked as a team and I couldn’t have done it without them. I can’t believe it.”

Under cloudy skies the temperature was well down on the previous day’s women’s race but the wind was whipping across Tokyo Bay with strong gusts registered across the bike course as the men lined up on the pontoon.

Jake Birtwhistle wore the number one knowing that even a top-eight finish could be enough to see him safely through to Tokyo 2020, but on the near side of the start it was Henri Schoeman once again spearheading the pack to the first buoy, leaving the Australian a minute back off his rival by the end of the two-lap swim.

Hungary’s Mark Devay and Richard Varga (SVK), Brownlee and Tayler Reid (NZL) were hot on Schoeman’s heels as they wheeled out of T1. Mislawchuk had also put in a good swim while Casper Stornes was some 30secs off the lead and Hayden Wilde had also toiled in the water coming out only just ahead of Birtwhistle.

The front pack of eleven was chased down and by the end of the second lap a swarm of over 30 riders came along the edge of the bay with Jonas Schomburg leading the train, Kristian Blummenfelt, Jonny Brownlee, Bence Bicsak and Tom Bishop also powering the group forward with plenty of hard work out front.

It was Norway’s Gustav Iden who clocked the fastest loop of the day with 7m:07s on lap three, before things started to change significantly as the bike segment wore on. First Richard Varga and Dorian Coninx, then Blummenfelt, Marten Van Riel and Lasse Luhrs came off, ending the Norwegian’s race early as the wind took its toll on such a dense cycle pack.

By the end of lap eight, having barely been out of sight of the front for the entire race, Mislawchuk came out of T2 and up the ramp alongside teammate Matthew Sharpe, Schoeman and Birtwhistle emerging together just behind Brownlee with Wilde and Stornes moving into position on the Canadians’ shoulders.

This year’s Belgian revelation Jelle Geens was also going well as part of a front five that now included Schomburg and stretched away from Brownlee and Iden, before also shedding the Belgian and German on lap two, leaving the talented young trio out alone and pulling away.

Their gap was 10 seconds over Brownlee and Iden at the 5km mark, but that only stretched as each dared to imagine a formidable gold. After taking turns gently probing and testing their rivals’ reserves, the first to really drop the hammer was Hayden Wilde, still 1.5km out but feeling fresh under his iced headband. Stornes and Mislawchuk hung, tough, and it wasn’t long before Wilde began to fade, leaving the duo to forge on ahead.

Inevitably it was down the chute that the final chapter was written, Mislawchuk delving into his reserves to summon one last effort and pull away from Stornes, punching the tape in delight as he took gold and another huge step towards a place at the Tokyo 2020 Olympics.

Stornes was equally delighted with second, while Wilde crossed the line 8 seconds back, bronze guaranteeing his seat on the plane next year.

“We prepared specifically for this,” added Mislawchuk, who now needs a top 5 in Lausanne, Bermuda or Yokohama to guarantee his place in Tokyo 2020. “Me and Hayden turned well the whole way and we knew we were in it for the medals if we worked together. It came down to a sprint and I had the legs and I wanted it more than anything today. I thought I may never have the chance to win a big race like this ever again so I’ve got to take it now.”

“If you want to do it on one course, it’s this course. Now we know how to prepare for next year as well. I just want to thank all my supporters and the people who believe in me, from now and it goes back to when I was 15-years old and my parents. It’s a big moment for everyone in my circle.”

“I had a good training camp before here and I felt really good”, said Stornes. “It’s been amazing to come back like this. It was a bit windy on some places on the course. I tried to stay in the middle of the group and not use so much energy. It means a lot since I haven’t had a good season. It was really nice to come back like this and show that I am capable of being on the podium.”

“The swim was brutal, there were guys all over my feet,” said Hayden Wilde afterwards. “I got onto the bike and saw a few familiar faces, even holding on to second wheel was a mission. The wind was insane and everyone was really good, taking turns. The legs felt really good.”

“I was first into transition and just wanted to find my legs quick on the run. From there, we were trying to keep it consistent, talking to each other and play it fair. The last lap was every man for itself. With about 1500m to go, I just didn’t have the legs in the end but I am absolutely stoked to get third.”