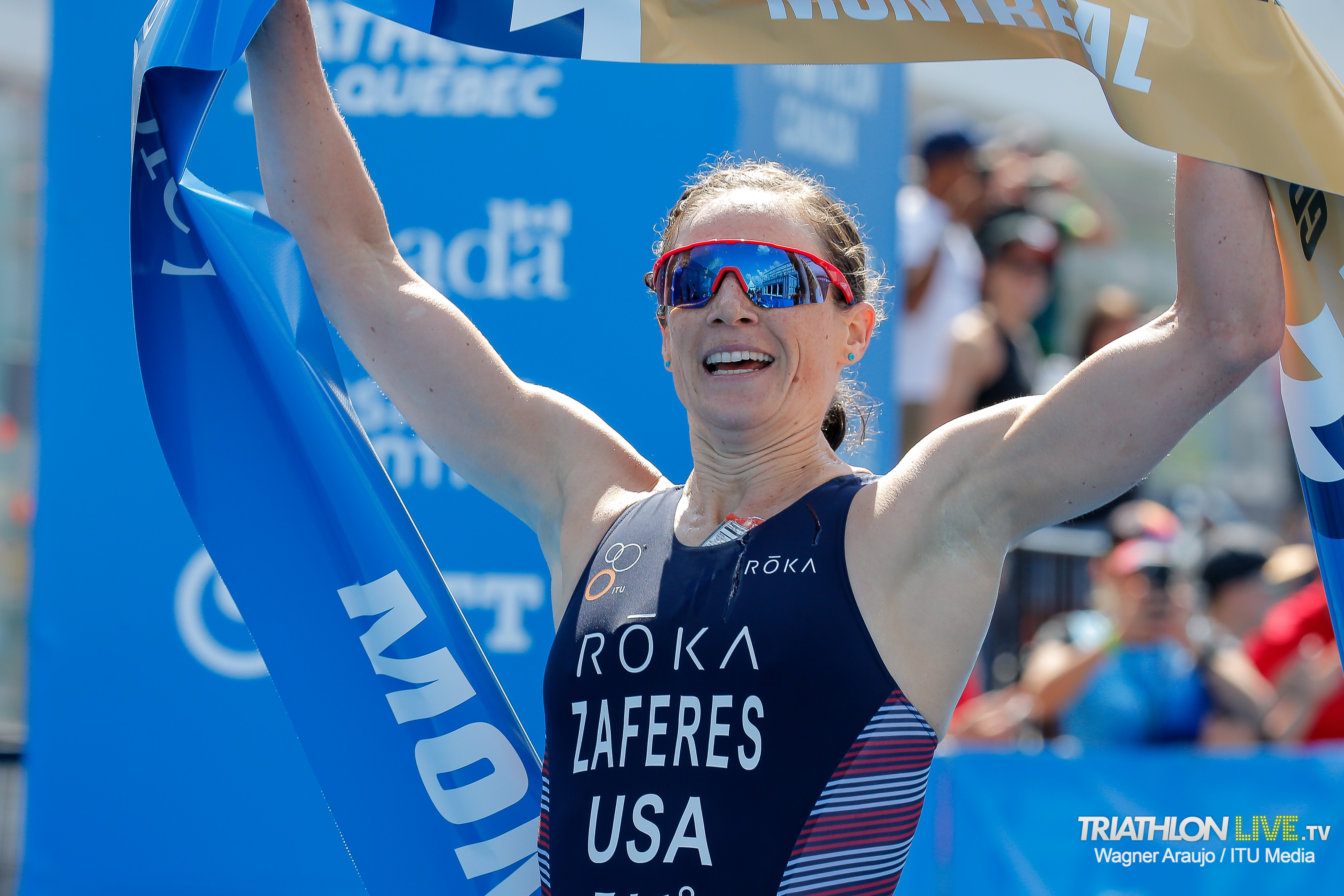 American Katie Zaferes made a clear statement towards claiming the World Title at the end of the season by storming to victory in the Groupe Copley World Triathlon Montreal, in a warm and humid afternoon that saw British Georgia Taylor-Brown grabbing the silver medal, while her teammate Jessica Learmonth finished in third place.

In the fifth stop of the World Triathlon Series, the circuit crossed the ocean for the first of the Canadian races of the year, with athletes battling on a brand new sprint-distance Elite course on Montreal Island, emerging from Lawrence River and out onto a highly technical and tight city-centre ride before the 4-lap run reaches its finale back amongst the quayside’s crowds.

And the race started to unfold in the 750 meters of the point to point swim, with Brazilian Vitoria Lopes showing once more that she is a very strong swimmer. Behind her, only a few meters behind, were Maya Kingma (NED), Jessica Learmonth (GBR) and Katie Zaferes(USA), who quickly opened a small break and left the first transition with a few seconds over the chasers.

But in the first lap of the bike, Taylor Knibb (USA) and Georgia Taylor-Brown showed her bike skills and, along with Alice Betto (ITA), quickly joined the leading pack. And it was a matter of a few kilometers when the seven of them started taking turns in the lead to build up a difference that at the end of the fifth lap was just over a minute.

Enough for them to know that it was going to be decided in the run, knowing that a minute in 5 kilometers run seemed too much even for excellent runners like Ashleigh Gentle (AUS) or Rachel Klamer (NED).

Zaferes looked determined to go for the win right after leaving the second transition, and only Taylor-Brown seemed able to follow her. They quickly dropped Kingma, Lopes and Knibb, and half way through the run Jess Learmonth and Alice Betto also started to loose some seconds with the leading duo. In a final lap that looked quite similar to what happened in WTS Leeds only a few weeks ago, Taylor-Brown and Zaferes started yo-yoing one each other until Zaferes in the last kilometer showed that she is a tough one to beat when it comes to tough races. She sprinted without looking back, to cross the line in first place and grab her fourth victory of the 2019 WTS season, which puts her in a quite comfortable position for fighting for the overall victory next August.

Behind her, a delighted Taylor-Brown was all smiles claiming the silver medal, while Learmonth out sprinted Betto to claim the last spot of the podium, leaving the Italian in the bittersweet fourth place.

Knibb hold on to the fifth place, while Belgium’s Claire Michel had one of the fastest run splits of the day to finish in sixth place.

It was a day of firsts in the Mens race of the Groupe Copley World Triathlon Montreal, with Belgian Jelle Geensclaiming his first ever win in the WTS history, after a magnificent run that out-sprinted three times world champion Mario Mola (ESP), who returned to the podium claiming the silver medal. And for much delight of the local crowds, Canadian Tyler Mislawchuk finished in third place, also a first ever WTS podium for him.

This year the race showcased a brand new course, with athletes swimming 750 meters on the Lawrence River and out onto a highly technical and tight city-centre ride before the 4-lap run reaches its finale back amongst the quayside’s crowds.

And it was to no one surprise that the first one of the water was South African Henri Schoeman, proving once more that he is the one to beat when it comes to swimming. Two other excellent swimmers, Richard Varga (SVK) and Matthew Hauser(AUS) followed him close, but this time, the sprint distance course was not enough for them to open a breach, and a large line of athletes followed him in the long run from the swim exit to transition.

So when the men jumped on their bikes, a massive group of more than 30 athletes was riding together out of transition, making the course a demanding one, with 16 technical corners to manage on each of the five laps around the city center of Montreal. While the athletes drove cautiously and a massive storm approached, the group was just managing lap after lap, with most of the great runners in the back positions trying to save some legs for the final leg of the race.

Lap after lap, the athletes saw that all the big names were in the same group, and understood that saving some energy for the last minutes will be crucial, and so they cruised easily together during the 20 kilometers of the bike, five times up the hill of Montreal.

When it all came to the run, South African Richard Murray was the first one to push and tried to speed up the group right after transition, only to be followed close by Jelle Geens (BEL), who stood by his heels without ever looking back. Probably because looking back would have been quite scary for them, with runners like Mario Mola (ESP), Kristian Blummenfelt(NOR), Tyler Mislawchuk (CAN), Jonas Schomburg (GER), Fernando Alarza (ESP) or Javier Gomez Noya (ESP) chasing.

It was then when the heavy rain stormed Montreal, with athletes speeding up trying to make their suffering shorter. Mola, who desperately needed a good result to keep his aspirations of the world title alive, pushed the pace one step forward and by the second kilometer commanded the group, dropping people meter by meter. The first one to slow down a bit was Murray, then Schomburg and with one kilometer to go, Gomez Noya and Fernando Alarza also were not able to keep up with the pace the Spaniard was imposing. But Geens, a training partner of Mola, looked fresh and determined, and with 500 meters to go both of them dropped Blummenfelt first, and Mislawchuk then, to just face the blue carpet shoulder to shoulder.

In the last meters, and under a heavy storm, it was the Belgian who found the strength enough to beat Mola almost over the finish line, to claim not only his first ever WTS victory, but also the first time a Belgian is on top of the podium in the WTS history.

Behind him, Mola grabbed the silver medal while Mislawchuk was in tears crossing the finish line in third, also his first WTS podium on his career, being cheered by the local crowds who stood under the rain.

Murray recovered a bit in the last few meters to cross the finish line in fourth place, followed by Blummenfelt and Alarza in sixth place, enough to put him as the current series leader.