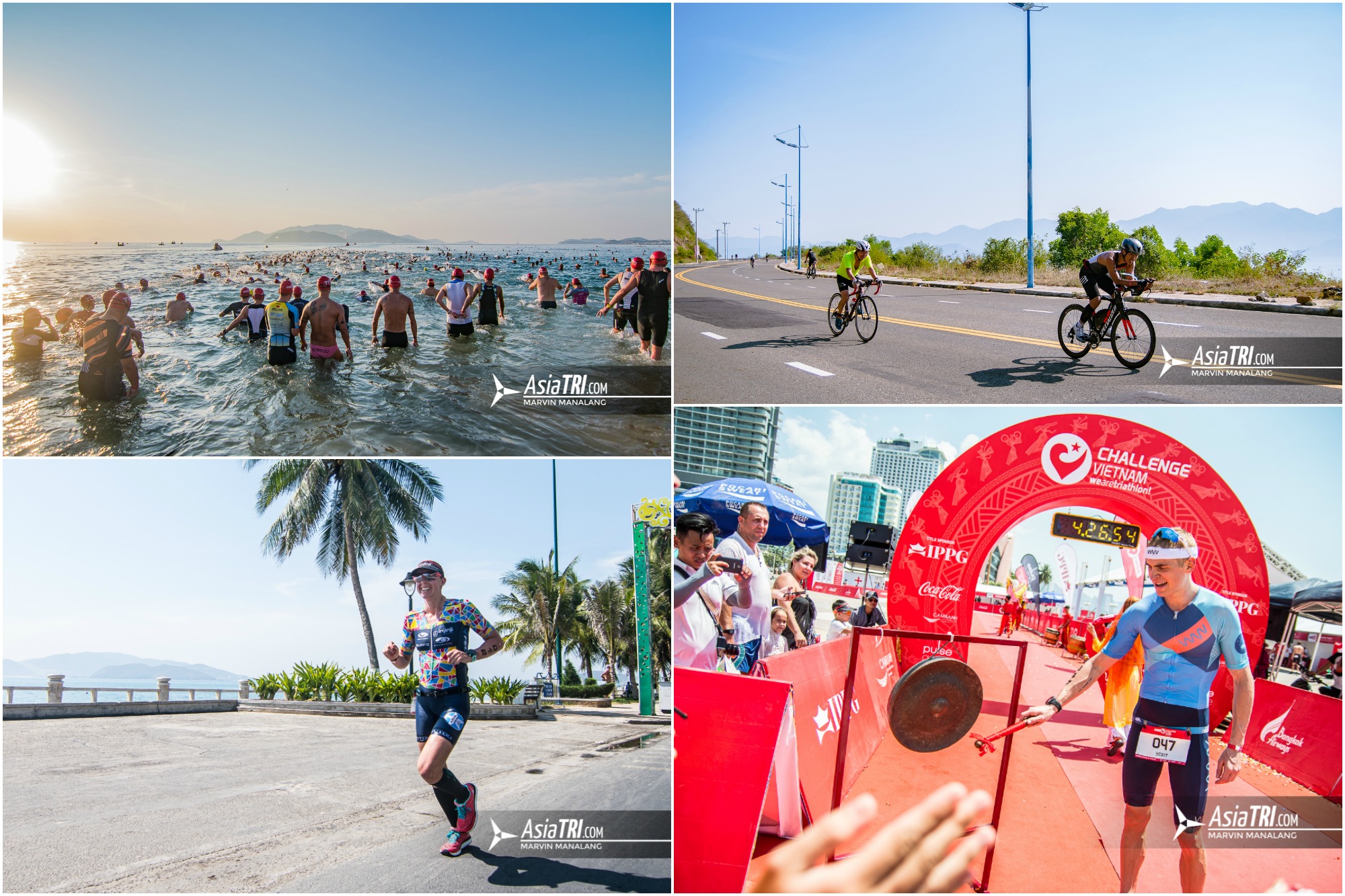 by Vinnie Santana (AsiaTRI’s Contributor and Triathlon Coach at  ironguides.net) and Marvin Manalang

The 2016 Challenge Vietnam was awarded AsiaTRI’s Best Inaugural Long Distance Triathlon race in Asia that year and this year’s staging, after an absence of 2 years featured not only a larger number of participants, but also paraded the same exact beautiful course in the coastal city of Nha Trang.

With a small field of 215 participants (with 51 Vietnamese nationals) in 2016, this year’s participants almost reached 500, with Vietnamese locals making up more than 50% of the field at 273.   The race could easily support around a thousand participants as the course had enough room and space for all athletes, providing safety on the bike course, with the main loop fully-closed to vehicular traffic.

Another important component that made this a well-organized race was the  background of the organizers Pulse Active.   They had been organizing big races in Vietnam, namely the Ho Chi Minh City Marathon, Da Nang Marathon and Color Runs.  They also hired a team of experts in triathlon events from both the Philippines, Malaysia and Singapore.  For this 2nd Challenge race in Vietnam, the race was superbly-organized.

While the 2-year absence can be attributed to a non-committal support from local government on road closures, this year’s event is back in a big way, and based on the race course and the vibe that came along with it (the post-race party was one of the coolest in the circuit), it is arguably one of the best triathlon race in the region.

GETTING THERE, WHERE TO STAY & THINGS TO DO

Nha Trang airport is called Cam Ranh Airport and it is about 30 km away from the city center. From there, you can take a 45 minutes taxi ride which should cost you about $15 to the event and the tourist area or you can take a shuttle bus for around $3.

All pre-race activities are all along the vicinity of 2-4 square, less than 1 km all in radius.   2-4 Square is where the transition, swim start and finish line are located.   Getting around is fairly easy, download the Grab app, and you have option to ride a scooter (cheaper but more adventurous) or a taxi.

There are accommodations for all budgets in the city, from the International five star hotels to budget guest houses.

While the weather was quite unpredictable in Vietnam at the inaugural race in 2016, the weather in this 2019 race was consistent, with the hottest temperature averaging at mid 30s celsius in the whole time I was there.

The wind made the waters choppy leading into race day, but on race day it was as calm, not a glass-like look, but was very manageable even for beginner triathletes.

If you plan to do any event in Vietnam, be ready to race in  heat that you haven’t experienced before.

Clear and clean waters with a paradise set up and background, that’s the swim course in Nha Trang. The two-lap course is triangular-shaped and requires swimmers to exit the water briefly to start the second lap. The water temperature was approximately 25-26ºC, which was just warm but not enough to overheat you and affect your whole race. 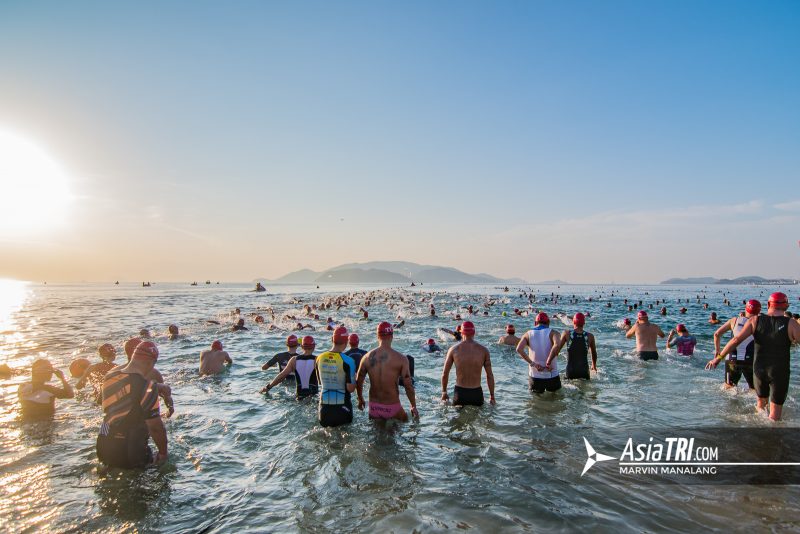 This was a beginner-friendly swim since the the cut-off time is 1h 10mins and another helpful safety measure was a lane rope connecting all buoys which made it easier to swim straight, the organizers provided several jetskis and lifeguards that were stationed around the course.

Once on the bike course, the first 9km is in town and mostly flat until athletes reach the start of a 18km loop (9km out, 9km back) where athletes will complete 4 laps.  There was some concern on the amount of traffic that will be allowed on the first 9kms going out to the looped portion, but as I rode out on a scooter to cover the bike leg, I was pleasantly surprised the traffic was well-controlled by the presence of Nha Trang police and traffic officers, especially on intersections where pedestrians going to the beach might cross.

Despite sounding a little repetitive, the course is highly dynamic with a mix of everything, with a steady mix of short and easy hills and a flat section in and out of one of the u-turns then back to town.   A strong high-performing athlete may be able to spend the entire time on the big chain ring, while beginners may be better by shifting to a lighter gear and spin their way up.

The downhills aren’t extremely technical but if you don’t know the course, it is very likely you will need to get out of the bars at least for the first lap until you get used to it.   It’s a safe course and beginner friendly with four wide lanes closed for traffic, just don’t expect an extremely fast bike split for this race.  As a benchmark the top male pro’s rode in between 2h11′ to 2h20 and that was in the relatively mild temperature.  While in a faster course riding 2h08-2h12 shouldn’t be an issue, 6-8minutes slower at this course may translate to 15-20 minutes to an average age grouper. 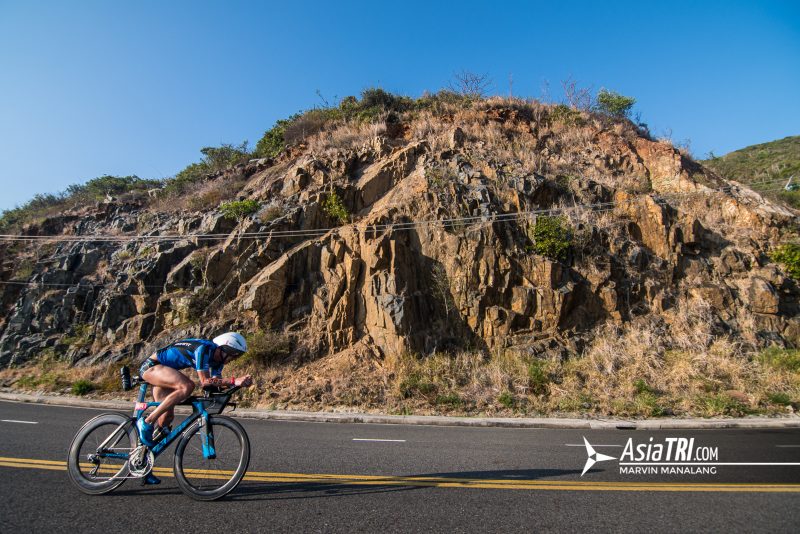 The 18km loop was 100% closed to traffic with 2 lanes each for the athletes in one direction and the smooth surface translated to perfect riding conditions.  This is one of the most scenic and best bike course on the circuit.

Some important notes on equipment is regarding the wheelset you want to use in the race.  Since it is a bike course near the coast, there’s a good chance you will ride with strong cross winds, you may want to avoid deep rim wheels or disks.  But on this second edition, crosswinds are minimal, so riding in deep rim wheelset will be a big gain or disadvantage, so a gamble.

The course also requires consistent shifting in your gears and very often you will be out of the saddle, those with eletronic shifters will enjoy the convenience of shifting while standing out of the saddle, if you are on a traditional shifter, get ready to sit down, shift then getting up again. Come with your derailleur working extremely well to avoid any frustration. 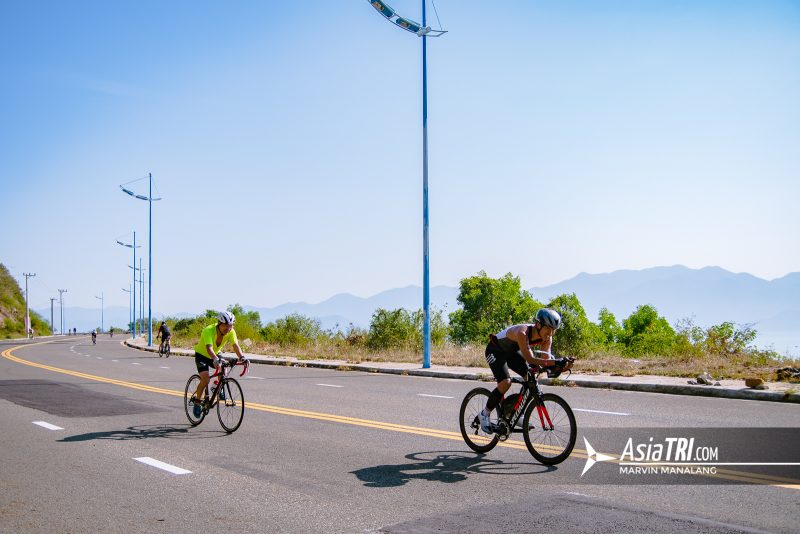 The run course at Challenge Vietnam is mostly flat apart from a couple of short and easy hills (one being a bridge). It’s a 10.5km out then back on the same road, running past some of Nha Trang’s main beaches. 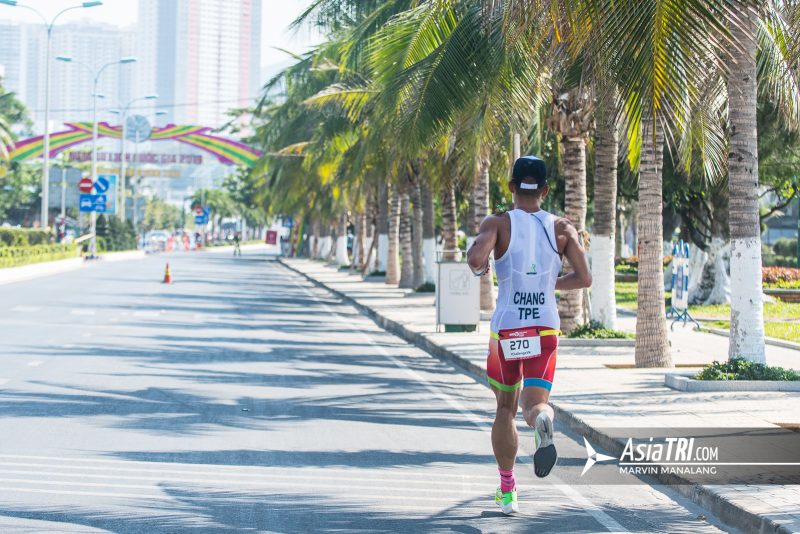 The race in 2016 saw Mitch Robins win with the fastest running split of the day in 1h 17mins, in overcast weather.  This year, champion Steven Mckenna had the best    And it can translate for the average age grouper into a fifteen to twenty minute slower run times.   You may want to adjust your training goals accordingly and keep it flexible on race day.

If you are looking for a destination race in paradise with a challenging course, consider this event as it will offer the full package.

Check our other course reviews here. Over 30 reviews of the main events in the Asia Pacific region

Click here for the race recap of of Challenge Vietnam 2019