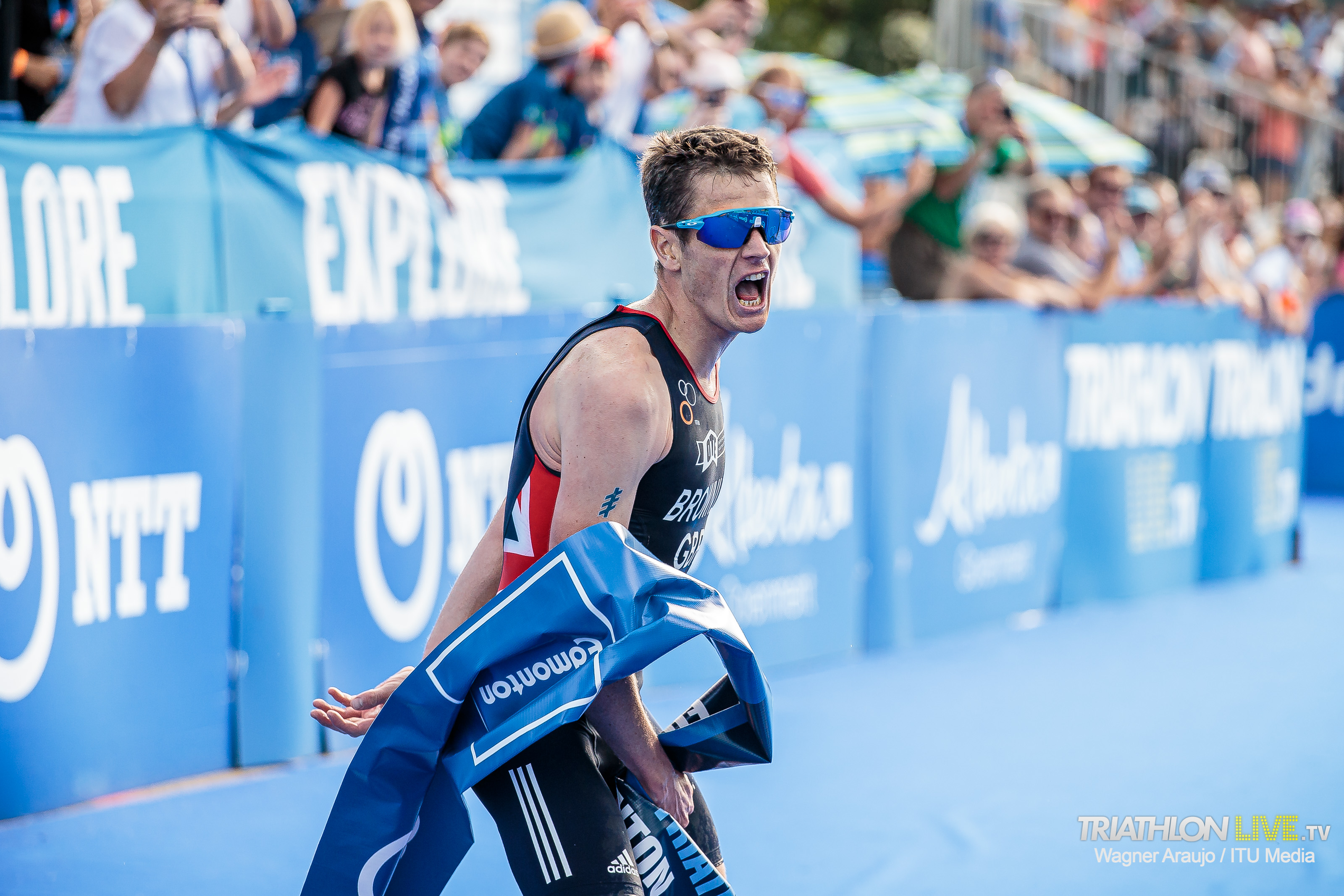 Saturday in Edmonton proved to be redemption day for one of the legends of the sport: Jonathan Brownlee (GBR). After quite a disappointing season with three WTS appearances and none of them finishing is positions that he is used to, the double Olympic medallist showed up in Edmonton ready to prove that he is still one of the favourites every time he lines up in the start of a race. And this time, the younger Brownlee delivered. Along with him on the podium were Mario Mola (ESP), back in form and ready to keep the fight for the World Title open, and Marten Van Riel(BEL), stepping on the WTS podium for the first time in his career.

The sun held on for another exciting sprint distance race this Saturday in Edmonton, Canada, and right out of the gates Vincent Luis (FRA), current Series Leader, surged out on the swim, even though he was quickly followed by Van Riel, Ben Kanute (USA), Brownlee and Matt Hauser (AUS).

The group, all strong on the bike, made an early statement and built up a 20 second lead in the first lap of the 20km bike course, but the large group of chasers was not willing to give up their options so early into the race.

The chasers in fact organised themselves quite quickly, and with strong bikers like Mola, Javier Gomez Noya (ESP), Fernando Alarza (ESP), Hayden Wilde (NZL), Tyler Mislawchuk (CAN), Jelle Geens (BEL), they worked together in order to keep the situation under control. Behind them, Jake Birtwhistle, another favorite of the season and Edmonton podium potential, came out far back on the swim and only made it to the second lap of the bike, riding alone, before calling it quits.

With the six leaders taking turns to maintain the breakaway, the troubles came to the large group of chasers at the end of the bike course. During the last lap of the bike, coming down the hill into transition, Reinaldo Colucci (BRA) and Stefan Zachaus (LUX) crashed while taking off their shoes resulting in a large pile-up that included Javier Gomez and Jelle Geens, leaving them out of the race.

The front pack started out on the run course with Matt Hauser trying to take an early lead before being falling back after the first kilometer. Jonny Brownlee looked in perfect form and in control of the situation, with Martin Van Riel following closely behind as they slowly increased their lead. With the two of them running almost together, it was the younger Brownlee who added an extra gear to leave Van Riel behind in the last lap and cross the finish line in the first place, his first win of the season.

“I knew I could do it. I knew I was doing well in training; I was just having bad luck after bad luck. It’s been tough but I finally won something”, said the British. “The swim was great and on the bike we really committed. On the run I was actually faster than I thought, and I felt really good. I’d be lying to say that it doesn’t hurt when people say he’s past it. But I know from my training that I am fit and I still believe I can have my best racing in the year to come. I am getting there now… It’s about time”.

Behind him, Mario Mola was on a mission looking for his 6th podium in Edmonton and started passing athletes one by one until only Brownlee was left ahead, to end up finishing in second place and enough to get him in the second place of the Series rankings. “The guys did amazing work in front. We did our best on the bunch to try and keep that distance as small as possible, but I knew if they had a good run, I would not be able to get them. I did my best. I am very happy with where I am at now. Time to get back to work”, said the Spaniard, who will skip the Tokyo test event to focus on the Lausanne Grand Final at the end of August.

All smiles, Van Riel managed to cross the finish line in the third place, his best ever result and the third consecutive podium in a WTS race for a Belgian. “I have been waiting for this my whole career, so I am super glad to finally catch it. I have been close (to the podium) but every time I fell a little bit short and today everything fell together,” he said.

She hadn’t been in a WTS podium since 2014, but in the last few months Australian Emma Jackson had been showing that she was back on form and ready to move one step forward. The brand new course of the 2019 ITU World Triathlon Edmonton proved to be the perfect scenario for her come-back, nailing a perfect race to claim her first ever WTS victory of her career. Behind her in the finish line were USA’s Summer Rappaport and another Australian, Asleigh Gentle.

The women lined up in the Hawrelak Park with the sun shining bright up in the sky after a few days of heavy storms and USA’s Summer Rappaport lead the athletes out of the water after a fast 1750m swim in the calm lake waters. Right on her heels was Spaniard Sara Perez Sala, along with Sophie Coldwell (GBR) and Taylor Spivey (USA). The five of them pushed to break away as soon as they were out on their bikes.

Right behind them, a large group of chasers started to work together in order to make the distance as short as possible, and with strong riders like Ashleigh Gentle and Taylor Knibb (USA), the break-away only lasted one lap and a large group of almost 20 athletes rode the 20km together on the tough course only losing one person along the way; Knibb, who had a flat tire managed to change it quickly enough to stay in the race, but losing all her chances of fighting to be on the podium.

With almost 20 athletes getting to the second transition at the same time, it was clear that it was going to be a race for the fastest runners on the field, and well-known runner, Gentle, took the lead in the first meters. She was quickly followed by Rappaport, Claire Michel (BEL) and Jaz Hedgeland (AUS) while just behind another small group of athletes formed led by Lisa Perterer (AUT) and Emma Jackson.  Some other great runners followed like Yuko Takahashi (JPN) and Nicole Van Der Kaay (NZL) also close enough.

As the kilometers went by in the flat course of Hawrelak Park, Rappaport, Gentle, Michel and Jackson looked to be the ones that still had an extra gear left and went for it together until the last couple of hundred meters when Jackson, when overcoming several years of injuries in her foot, hung on to take the tape and at 26, claim her first ever WTS victory.

“I hadn’t been on a WTS podium since 2014, so I am quite emotional now”, said Jackson. “I’ve had some good runs in Montreal and Hamburg and I have been training really well lately, but I was not expecting this. I just wanted to have a good swim and I think I had a terrible one today, but luckily Taylor Knibb and Ashleigh Gentle worked really hard to take us back up with the leaders. After so many months out with injuries and after so much time training, this feels quite unbelievable now”, she said.

A few meters behind her, Rappaport claimed the second place to prove that making it to the USA team for the Olympics is not going to be easy at all. Edmonton was her third WTS podium of the season, after a silver in Yokohama and a bronze in Hamburg. “I was looking forward to today and was pretty confident that if I executed well I could at least come close to the podium,” she said.  “We’ve got some big races coming up and a lot of people are going to be on for the Test Event and in Lausanne, so I am just going to keep doing what I am doing to take it to the next level as that is what it’s going to take at those races.”

The third place was for another Aussie returning to the top of the class in style, Ashleigh Gentle, claiming a podium position after a rather disappointing season. “It’s been a pretty tough year for me, probably more so psychologically than physically, but it’s really nice to come here and put that result together. It definitely makes it sweeter with Emma (Jackson) winning”, said Gentle, whose last WTS victory was at the Grand Final in Gold Coast 2018.

“It’s funny because I said to Emma (Jackson) before the race, that we’ve been doing this together for 14-years – why do we keep doing this to ourselves and she said well I guess there are some hard times, but when you come across the line and it’s a good race, you realise it’s really worth it. I always love seeing other fellow Australians do well and I think we are both excited to go into Tokyo. For me personally, whatever happens with the result (at the Test Event), I just want to make sure that I am there to suss out the course and see how it is because if I make that Tokyo team I want to make sure I race to perform”, she said.

The chocolate medal was for Claire Michel (BEL), consistently in the top 10 this season and Edmonton has been her best ever result in a World Triathlon Series event, while Taylor Spivey claimed the 5th place.