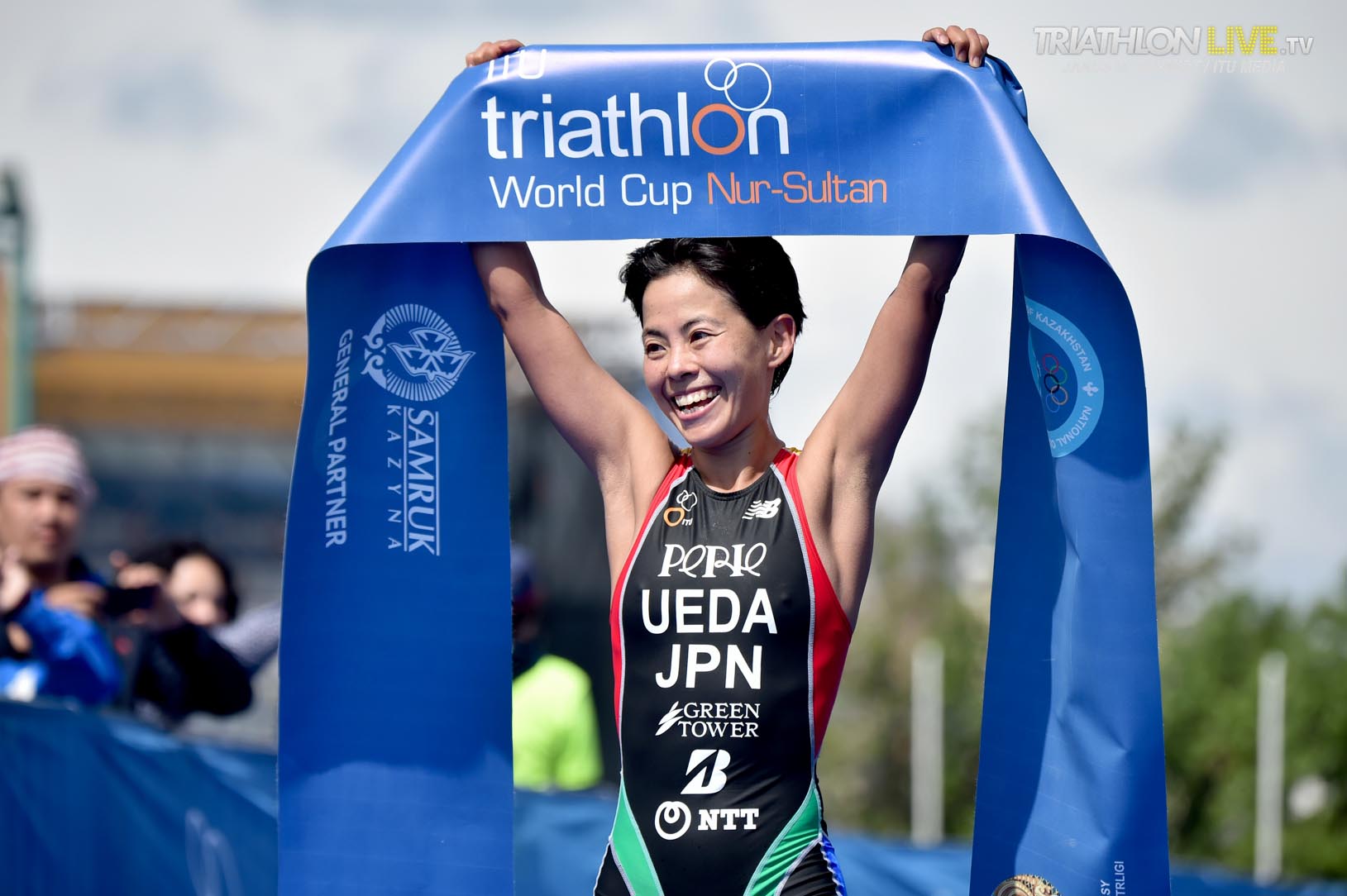 Japan’s Ai Ueda showed she is back with a bang after her bike accident in Abu Dhabi, laying down a scintillating run display on Saturday morning to win gold in the Nur-Sultan World Cup. The race format had to be changed to a duathlon due to water quality issues, and it was Ueda who summoned all her experience to adapt and thrive among a strong field, finishing ahead of Ireland’s Carolyn Hayes and Great Britain’s Kate Waugh.

“That last 10km I just pushed on hard,” said a delighted Ueda afterwards. “Now I am looking forward to the Asian Championships and continuing my return to full fitness. To come back to the podium here makes me so happy, and I hope to go on and build now towards that first WTS Podium soon.” 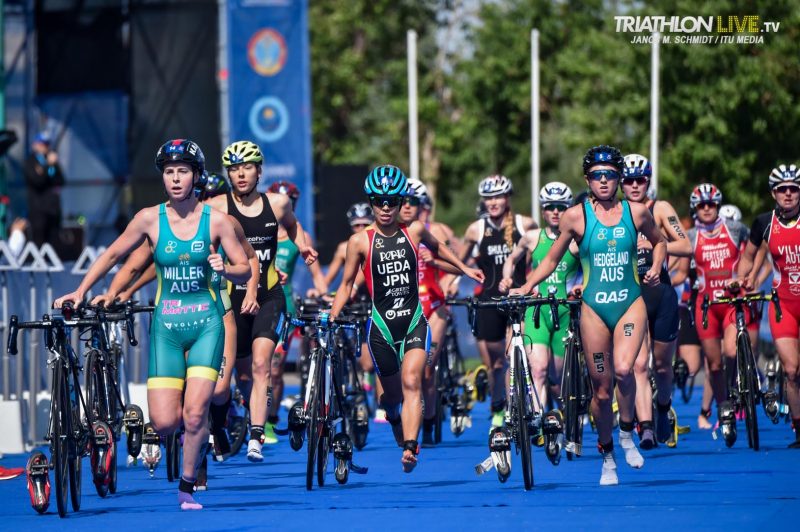 It was a fresh morning in the Kazakh capital as the women lined up for the opening 5km run, where Russia’s Diana Isakovaflew out from the first corner, extending a healthy lead for much of that initial 5km before eventually being reeled in by the experience-laden pack by the time they reached T1.

Austria’s race number one Lisa Perterer lost a little time through that first transition, while Nina Eim (GER) and Jaz Hedgeland (AUS) were out in front onto the bikes for the start of the six-lap ride.

Another Australian, Tamsyn Moana-Veale was then pushing from the front before Anastasia Gorbunova (RUS) rolled the dice on lap two, but she was soon caught by the 22-strong pack. Edda Hannesdottir and Anne Holm were among those 30-seconds off the front riders and organising themselves to make up some ground after two laps.

Perterer and Waugh, the youngest athlete in the field, headed the front group after 4 laps while Hannesdottir was closing in hard just 14 seconds behind. With nobody pushing too hard among the leaders and the group’s sheer size causing slow-downs at the two u-turns, the entire field slowly came together until halfway through the penultimate lap it was indeed Hannesdottir taking her turn out front.

Out of T2 it was Ueda in the lead once again, however, and she and Ireland’s Carolyn Hayes had the rhythm to make a breakaway on the first lap of four, before the experienced Japanese star kicked on even harder to drop Hayes and forge out ahead on her own. Soon she had 10 seconds on the Irish youngster and 30 seconds on a trailing group of nine that included Perterer, Waugh, Nina Eim, Yuliya Yelistratova (UKR) and Moana-Veale along with ASICS World Triathlon Team’s Romina Biagioli of Argentina.

Everyone in that potent group had thoughts of bronze or catching Hayes if she faltered, but it was Waugh who had kept enough in the tank to pull away. As a delighted Ueda took the tape with the fastest run split of 34m38secs and a delighted Hayes the silver, the Brit dug in, easing away from the pack to earn a first World Cup podium of her young career. Russia’s Elena Danilova out-sprinted Nina Eim to fourth, Jaz Hedgeland (AUS) crossed in sixth and Lisa Perterer in seventh.

“I can’t really believe it,” said a beaming Carolyn Hayes after the race. “I was a little disappointed when I found out it was a duathlon but then I thought i’ve been running really well so maybe it could suit me. I’m just delighted for my coaches and everyone back home. At one point I thought I could actually take Ai but she obviously went out fast on that first run lap. This sport demands a lot and I cant believe this time last year I was working full time and now i’m on a World Cup podium in Kazakhstan, it’s great.”

“I just tried to stay with the pack at the end there,” said Waugh, “my coach said time and again don’t go off too fast but on that last 2.5km i still felt good. My running has been going really well but haven’t had the best start to the season. This will give me so much confidence I really wasn’t expecting it. I was actually focussing on the pain in my feet and trying not to get too distracted – it obviously worked!”

Australia’s Matt Hauser pulled out another brilliant 2019 World Cup winning performance on Saturday afternoon with victory in Nur-Sultan following gold in Chengdu in May. Switched to a duathlon format on the morning of the race due to water quality concerns in the Kazakh capital, the action boiled down to three world-class runners and training partners, Hauser passing a brave Wian Sullwald (RSA) to take the tape, Matt McElroy of the USA coming home in third.

“I really wanted to prove myself on this distance and show that I had that 10k leg speed so I was really happy with that,” said a proud Hauser afterwards. “I’ve taken a lot of confidence from the Mixed Relay sprint distance format and wanted to prove a few things out there today. A big shout out to Matt Mac and Wian for some great racing and to Brandon Copeland for 9th place. Matt and I were working pretty well at the end and I just wanted to control my pace and know I had the leg speed to overcome Wian.” 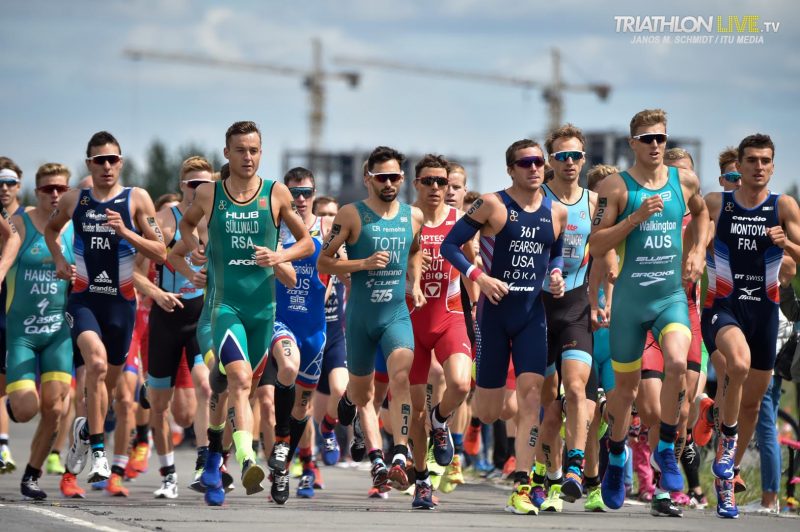 The duathlon format looked to play to race number one Matt McElroy’s strengths as he led out of T1 with no obvious signs of residual weariness after his WTS silver-medal exertions in Leeds less than a week before. There were threats all around though with just 10 seconds separating the top 28 as they mounted the bikes out of transition.

Along with Sullwald, the likes of Erwin Vanderplancke (BEL) and Emil Holm (DEN) were also looking comfortable after putting in 15m50sec for the opening 5km. Last year’s winner Dmitry Polyanskiy thrived on this circuit 12 months ago and also looked well set once more, but it was Sullwald doing all the early work over lap one of six on the bike.

That large, unwieldy pack stayed together as one until Vander Plancke and Lukas Pertl pushed the button, but their charge was short-lived and the duo were again swallowed up into the group of 34. The likes of Liam Ward (NZL) and Badr Siwane(MAR) remained just 12 seconds off the leaders themselves at the halfway point.

After 5 laps, Australia’s Max Neumann then made his move, powering away from the group and extending a 34-second lead seemingly out of nowhere, McElroy and co. content to let him go early and hope his legs start to think twice about the pace.

But Neumann just clicked, while the group struggled behind him, the leader able to focus fully on the task in hand out alone and maintaining his rhythm but the gap was eaten into over the final 5km of the bike and out of T2 he had a 7-second lead over compatriots Matt Hauser and Brandon Copeland, with Matt McElroy, Gordon Benson (GBR) and Sullwald among those still very much in check 12 seconds back.

Sullwald then made a charge, only Hauser going with him after the first 2.5km before Hollaus, McElroy and Maxime Hueber-Moosbrugger of France brought them back into range.

The South African looked calm enough until lap three drew to a close and at the bell, Hauser had him caught, from which point there seemed no way back. As Hauser stretched away, Sullwald doggedly held firm in second, McElroy unable to summon one last kick and having to settle for third, after the Australian took the tape with a roar to continue his brilliant start to 2019.

Lukas Hollaus (AUT) dug in to out-pace Lasse Luhrs (GER) to fourth place over the final stretch, behind them the French duo of Raphael Montoya and Maxime Hueber-Moosbrugger.

“I went for it hard at the start of the run and felt good and I knew the duathlon would come down to that last run,” said Sullwald. “It nearly paid off but that was two class guys to try and stay away from. As Matt was catching me I thought he looked strong and I was cramping up badly. But this is redemption and i’m only getting started, so it’s a nice confidence booster to take back into preparing for WTS Montreal and hopefully I can go from strength to strength from here on in.”