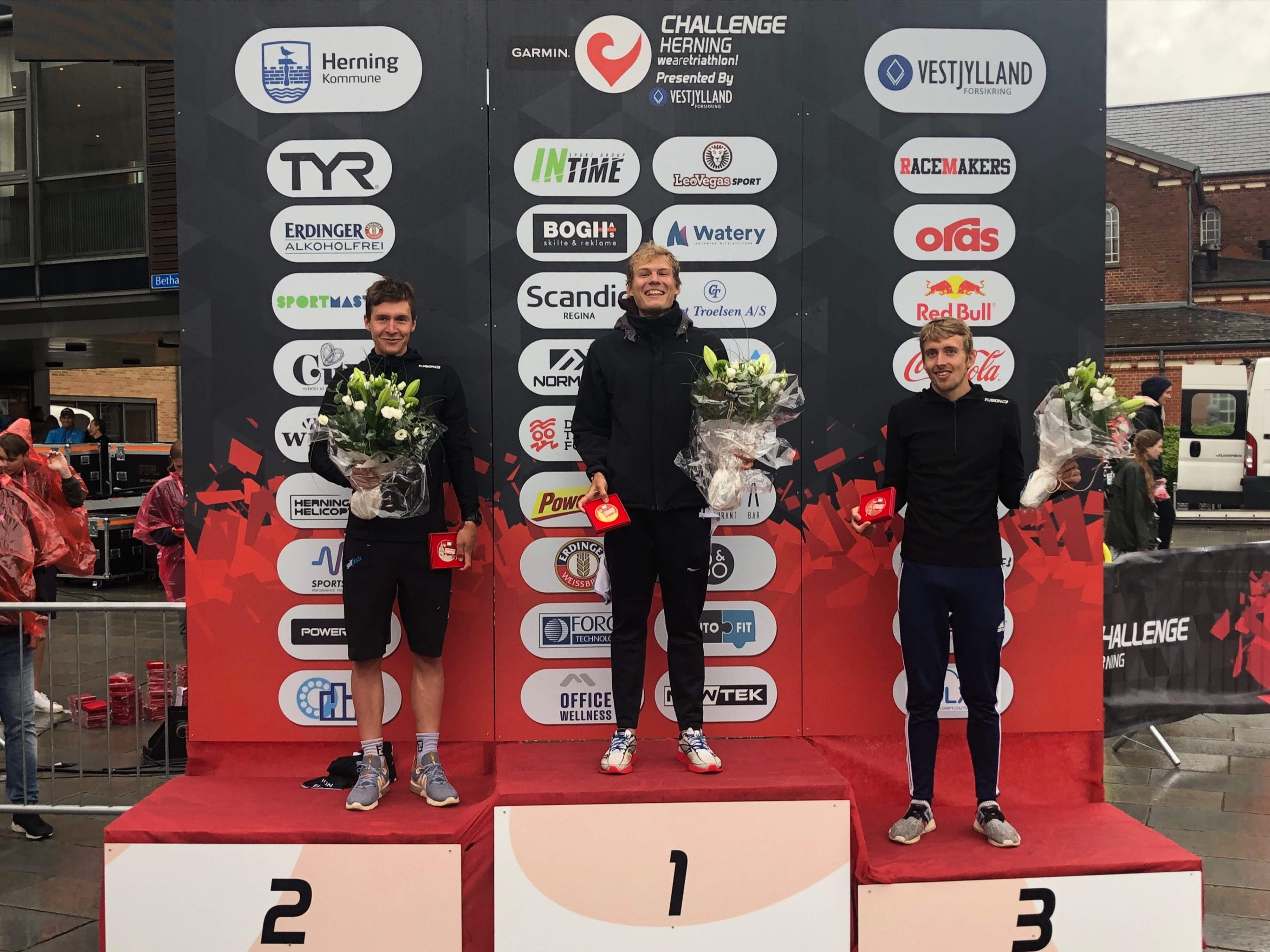 Sara Svensk and Mathias Lyngsø Petersen took today the win at GARMINCHALLENGEHERNING in though Danish weather with heavy rains and cold winds. While the women’s race quickly seemed to be decided during the run, the men’s race had many leaders and was exciting untill the last kilometres.

Women’s race
TheGARMIN CHALLENGEHERNING had an unusual race start, as the pro women were sent out first, followed by the female and male age groupers and at last the pro men. For all 1250 competitors, there was a 20m draft zone. It was Kimberley Morrison, Carolin Lehrieder, Pernille Thalund and Sara Svensk who formed a strong leading group during the swim. Morrison came out of the water first in 27:46. The strong time trial rider was immediately in control of the headwind and pushed hard in the group of three. More than three minutes from the leading four, a group followed with among others Lisa Roberts and Renee Kiley.

At the 30k mark, it was still Morrison in the lead, followed by Svensk at 46 seconds.Thalund and Lehrieder were three minutes behind. Roberts – whose expectations were high – was unable to join; at more than seven minutes behind Morrison she fought lonely against the heavy weather in Herning.

Morrison was the first to put on her running shoes, under the restless sight of rival Svensk, who was meanwhile sitting opposite her in the changing tent. Despite this exciting transition, the latter quietly took the time to put on her socks; Svensk quickly made up for the time she lost while walking. At this point, the battle for the win seemed to go only between Svensk and Morrison. That would leave the bronze for Thalund (+7: 36), Lehrieder (+11:11) or Roberts (+13:19), who started walking a short distance from the front two. Already after 5.7kilometers Svensk overtook Morrisson – despite putting on her socks. The gap between the two became bigger after this. In a time of 4:10:28 Svensk claimed a strong victory. Followed by Morrison (+3: 39) and Thalund (+10: 52), completing the podium.

Men’s race
The fastest swimmer was Thomas Strange: he swam 26:10 minutes over this 1.9 kilometer. Svensson followed closely, the French Guillaume was 14 seconds behind, while Lyngsø Petersen followed in 25 seconds just after Kristian Høgenhaug, who was expected to take the lead on the bike. The top five was complete with the Mexican Mauricio Mendez Cruz, 27 seconds from the top.
The French Guillaume took control of the Scandinavian field on the bike the first 30k, closely followed by  Strange, while Svensson and Lyngsø Petersen followed were about 51 seconds back. Høgenhaug and Svensson were the first to arrive in T2 and started running. Followed by Strange (+1:18) and Lyngsø Petersen (+2: 03). Guillaume followed more than three minutes from the first man and was unable to closing in on the run.

Unlike the women, the numbers three and four of the men quickly caught up with leaders Høgenhaug and Svensson. At 9.8 kilometers it was Lyngsø Petersen who took over the second place from Svensson (+0: 19); and he didn’t leave to that. Høgenhaug was unable to keep up with this pace and was therefore forced to give up the lead. Around 15 kilometers, it was Lyngsø Petersen to dominate the race to the finish line. Høgenhaug followed in 13 seconds and Strange in third place (+0: 41)