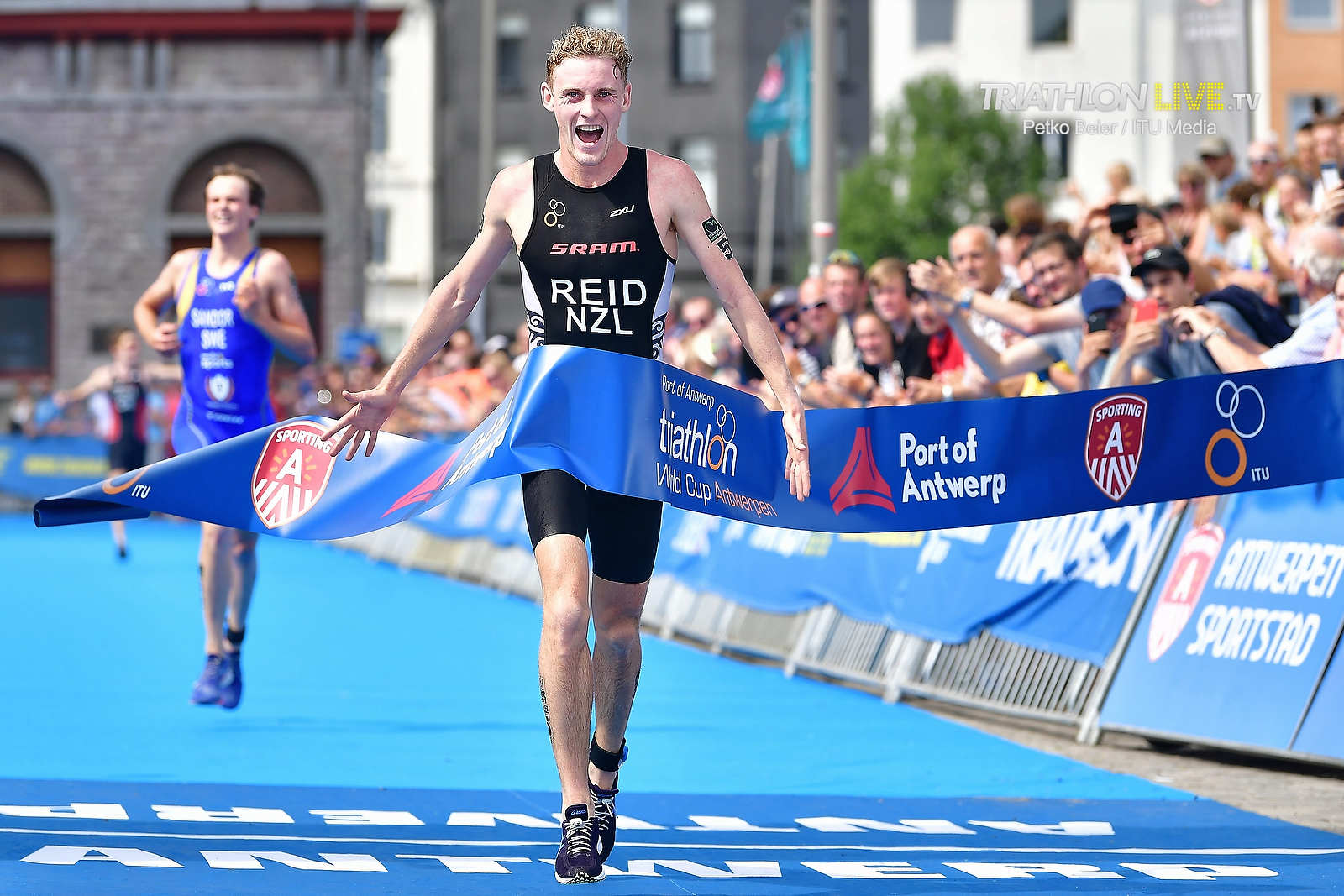 by Doug Gray/ITU Media  all images by Petko Beier

The 2019 Antwerp World Cup provided another dose of dramatic sprint-distance racing and some truly memorable performances on what was a steamy Sunday afternoon in Belgium. The crowds were out in force around the Willemsdock for the showpiece of the Antwerp Triathlon Festival, and the Elites offered plenty of entertainment to the masses.

First it was New Zealand’s Tayler Reid producing another gutsy sprint finish to win the men’s gold before Lisa Tertsch of Germany – 45th on the start list – came from nowhere to win gold in the women’s race with a blistering run.

Men’s Race
The sun was beating down as the athletes took to the pontoon for the start of the men’s race, and along with number one Hayden Wilde (NZL), many eyes were on Slovakia’s returning hero Richard Varga, an outstanding swimmer who has been out of action since WTS Bermuda and would inevitably head up the opening stages in the water.

Varga was joined by Australia’s Matthew Roberts, Spain’s Alberto Gonzalez Garcia and Chilean Diego Moya as the leaders came out of the water and up the ramp into transition, Wilde well-placed 15 seconds back.

Fellow New Zealander Tayler Reid was equally well set as they came out and onto the bikes, Jonas Breinlinger (GER) and Stefan Zachaus (LUX) also finding the rhythm in the early stages.

Hayden Wilde’s complete absence of any luck whatsoever in Antwerp continued as he got a puncture and once again had his race cut short on the first lap of the bike. Gregory Barnaby (ITA) and Russell White (IRL) were among the five athletes to end their race with crashes on lap two, and by lap three it was Endre Espedal looking to take advantage in the lead group, surging out ahead.

It was a useful seven-second margin that the Norwegian took out of T2, only for the likes of Zachaus and Kevin McDowell (USA) to lead the charge to catch him over the first kilometre of the run.

Most having been right there from the very start, it boiled down to who had the legs out of a group of seven at the bell; Zachaus, McDowell, Moya, Reid, Gonzalez, Florin Salvisberg (SUI) and Sweden’s young gun Gabriel Sandor, who had trailed by 30 seconds out of the water before delivering the fastest bike split of the day.

Sandor and Reid edged clear, the Swede narrowly out front as they hit the blue carpet before Reid dug in, memories of being outrun by Jelle Geens last year still fresh in his mind. Last year’s silver medallist timed his final attack perfectly this time around, flying to the tape two seconds ahead of Sandor, a delighted Diego Moya delivering bronze and his first World Cup podium.

“I’m a bit lost for words, I had to put everything into that to get past Gabriel,” said a relieved Tayler Reid afterwards. “I just thought no, not again! Those last few minutes I just pretended that I had Jelle Geens coming after me again so I sent it all the way to the finish, had a cheeky look back and hopefully everyone back home is still up to see that. The cobbles took care of a few of the boys and that switched up the race and we were working hard on the bike so I was wondering how it affected everyone else’s legs but came good.”

“I felt good on the bike and was chasing hard and then with the crash we caught the main group. I thought I had the chance to win but after that kick I didn’t have any power left for the last 100 metres,” said Gabriel Sandor.

“I cant believe it, I feel really good and kept pushing,” said Moya. “I felt the energy of the crowd and that was great. I arrived here two weeks earlier so had no jet lag, training has been good, i’ve been injury free. Tayler is amazing, I was just trying to hang on and I’m really happy with third place.”

Women’s report
Laura Lindemann wore the number one going in to the women’s race, returning from a short break from the action with illness and determined to get back to the kind of sparkling form that she showed at the start of the year.

There were plenty of strong swimmers alongside her, local favourite Valerie Barthelemy included, the Belgian looking to add a big run performance to her electrifying swim and bike of 12 months ago. She led again in the first stages of the swim and out of T1 onto the bike course, Germany’s Caroline Pohle and Sian Rainsley (GBR) for close company.

Pohle and Barthelemy were joined by Rani Skrbanja (NED) and Jolien Vermeylen (BEL) and the four of them had a six second lead after lap one, but after a brief attack from Barthelemy, the chase group, led by the hard-working Amelie Kratz(CAN) and Sophie Linn (AUS), were soon right on her back tyre.

Renee Tomlin (USA) and Anabel Knoll (GER) were also going well at that stage, while number one Laura Lindemann looked perfectly placed to deliver the charge that so many around the course expected of her.

It was to be another German, Nina Eim, who was the first out of the second transition and onto the 5km run, New Zealand’s Ainsley Thorpe and Nicole Van Der Kaay going well together too while Barthelemy chased hard to try and force her way back among the leaders.

That effort took a toll, however, and at the bell it was Lindemann and Lisa Tertsch who gradually stretched away from the rest of the contenders. Tertsch’s hard work over the first lap of two had paid off and she was only just hitting her stride. The two training partners clicked into an impressive rhythm to then pull away from the two New Zealanders and France’s Pauline Landron who by now were locked into a battle for third.

With half a lap to go, Tertsch found yet another gear, one that this time left her compatriot in her wake. By the tape, she had opened up an impressive 18-second margin over Lindemann in second, clocking in at 16:49 over the 5km. Behind the two Germans, it was Ainsley Thorpe who was able to edge out her rivals down the chute and take home a first ever World Cup bronze.

“I’ve been focussing on the running in recent years but now i’m also good enough to be in the first biking group it makes it possible to put in that kind of performance,” said a shocked Lisa Tertsch. “I did not expect that. It’s my third triathlon back and I wasn’t sure how it would play out but it was great to race with Laura and if I could have one person there with me I’m glad it was her.”

“I had a bad swim to begin with and had to push out on the bike but wasn’t feeling able to give any more and on the run,” said Lindemann. “I wanted to win of course but i’m still happy for Lisa, it’s a great achievement.”

“I was feeling good from the start and was able to relax a bit on the run so I could work harder over that last kilometre,” added Thorpe. “I was really wanting that bronze. I just went, looked back and saw I had it. That swim suits me but I’m blistered from holding on so tight over the cobbles so by the end I just was smiling all the way down the blue carpet.”