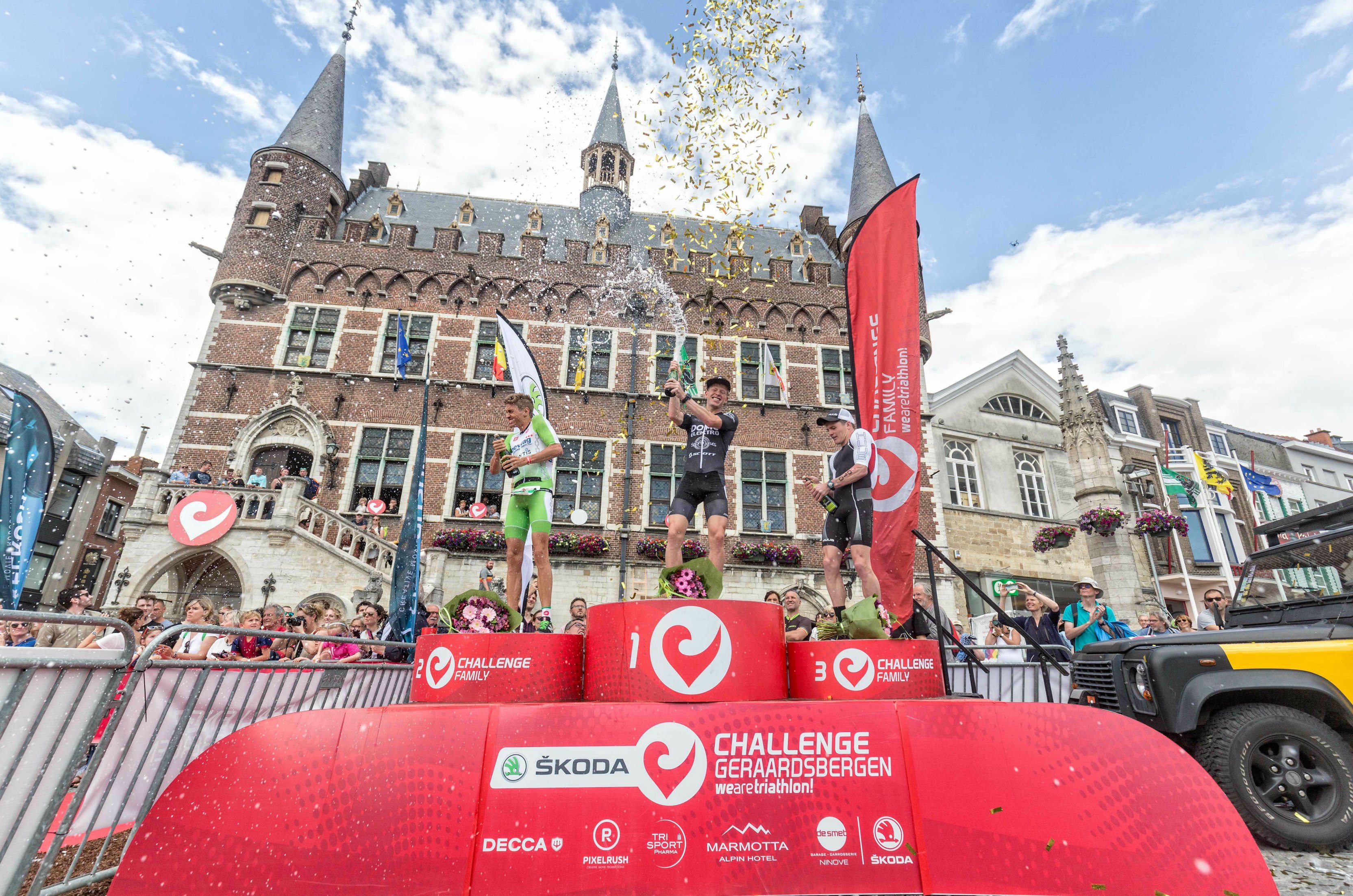 With an amazing show of power Pieter Heemeryck won CHALLENGEGERAARDSBERGEN this Sunday, June 16th.. The Belgian title defender was leading the race almost from start to finish and was obviously the strongest of all racing athletes. ,,It was a surprisingly good race for me.” At the women’s race it was German Daniela Bleymehl who took the victory after an impressive race. “I had some dark moments during the race, but enjoyed it from start to finish.”

The men’s race directly started good for Heemeryck when he came first out of the water. Nevertheless it was Dutch Marco Akershoek who jumped on his bike first, but closely followed by Heemeryck. It took Heemeryck only one kilometre on the bike to pass Akershoek and taking the lead. During the 90kilometres it was a one-man show for the title defender, because he was constantly increasing his lead on all his opponents. During the first kilometres Romain Guillaume, Jonathan Ciavattella, Kjel de Hertog, David Bishop andMauricio Mendez Cruz were following Heemeryck on almost a minute as the first chasing group. Just in front of this chasing group it were Pamphiel Pareyn and Tom Suetens on a second and third place, but after the first loop of 45km they joined the chasing group as well.

At almost the same moment Nicolas Dougall and Joe Skipper increased their speed, leaving a lot of guys behind and moving up to second and third place. Despite both athletes pushed it hard during the bike ride, they didn’t manage to decrease the gap on leading and dominating Heemeryck. It was the Belgian started his run with an over three minutes gap on Skipper, who got rid of Dougall in the last part of the bike.

Just as on the bike, Heemeryck was also showing his true power during the run, only extending his lead. “It was a surprisingly good race for me, directly from the swim. During the bike ride I had a nice gap already, so I knew I had a good day. But I also knew a race is only done at the finish and not before. Anything can happen here.”

Heemeryck admitted to be very happy with his victory and Belgian National Title Middle Distance. “To achieve this here at this place, in my home country, is so important for me. CHALLENGEGERAARDSBERGEN is an amazing race, the crowd is lovely and the course is great.”

Women’s race
At the women’s race it was top favourite Daniela Bleymehl who took the win in Geraardsbergen. It was her first time racing in this iconic surroundings. ,,What an amazing city and what an amazing course. I had so much fun during the race. But I also had some dark moments. It was tough, really tough. Especially the Muur van Geraardsbergen.” Bleymehl was not first out of the water, but showed her power on the bike like she use to do very often. After around 45 kilometres she took over the lead, going solo and extending her lead not fast, but definitely for sure. At the end she finished at the fastest women ever in Geraardsbergen. “Wow, I didn’t notice that. It was an amazing day. I’m in the middle of some heavy training blocks, didn’t know what to expect from my shape thanks to this, but it went very well. I really enjoyed the day, the beautiful race and everything else that has to do with this race.”

It was British Fenella Langridge who claimed the second spot after 4:20:48. Belgian Sara van de Vel became third in 4:23:47.