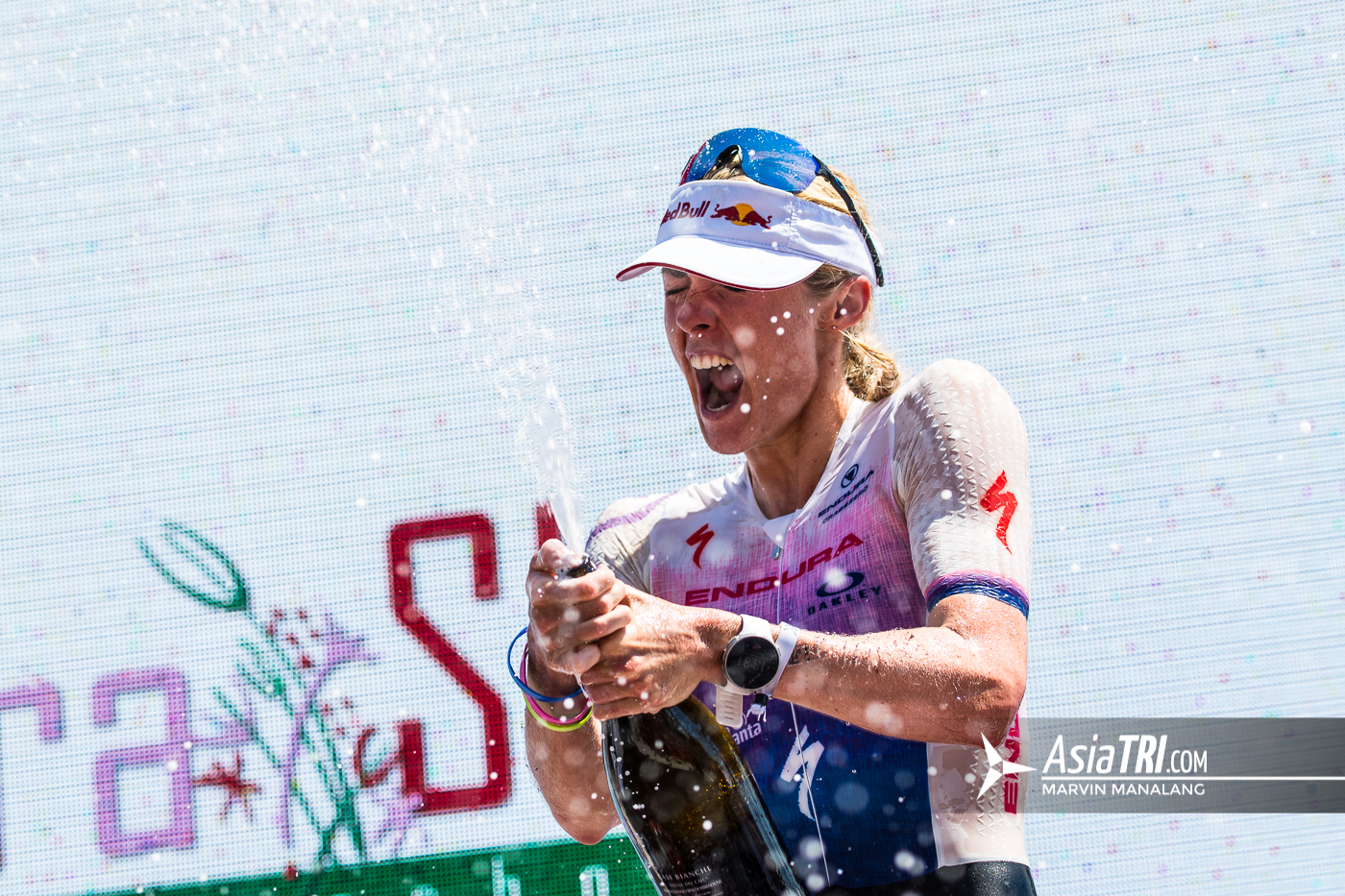 After a thrilling race which has only decided in the last two kilometres – in course record time too – Sebastian Kienle finally secured victory in Samorin today at THECHAMPIONSHIP. After a final surge to chase long-time leader, Pieter Heemeryck (BEL), it was the German who claimed victory in a swift 3:38:49. The women’s Pro race was dominated by Lucy Charles-Barclay. The British athlete also set a new course record in Slovakia, crossing the line in 4:00:25.

The men’s race started with a fast swim by Ben Kanute (USA) and Max Neumann (AUS), both athletes exiting the water inside 23 minutes. Once on the bikehowever, it was Heemeryck who showed his power to pass Kanute and Neumann before pushing on alone, building an impressive lead of around two minutes on the chasers, the German pairing of Florian Angert and Maurice Clavel. Heemeryck reached the second transition with an average cycling pace of over 47kilometres per hour; but starting the run his lead had been reduced to 29 seconds on Angert and 55 seconds on Clavel. Kienle started his half marathon in seventh position, 2:39 behind Heemeryck, the top ten men all still in podium contention in what was proving to be a very competitive and close race.

‘My mind was strong enough’
Widely recognised for his cycling prowess, Kienle was proving he is also a talented runner. The Belgian was running strong at the front, but the charge from the second placed finisher from the past two editions was too much. Kienle bridged the gap with just 2km remaining, accelerated one more time and left Heemeryck behind as he pushed on for victory. “I think this was one of the best runs of my career”, Kienle reflected on his 1:11:31 performance. “Not that the time is important, but more how I produced it. That run featured a lot of ups and downs mentally. Luckily the last push was forwards and not backwards like last two years. With eight kilometres to go, I really didn’t think there was a chance to win anymore, but my mind was strong enough to make it happen.” ‘Happy, despite wanting to win’
For Heemeryck, this performance came as a little surprise. “I wasn’t thinking I would stay at the front on the bike, but during therun my legs felt very good. Still, I was looking over my shoulder the whole time, which was probably my biggest mistake of the day. At the last turn I was like, ‘no, Sebi is here’. I tried to follow him, but this wasn’t an option anymore; Sebastian was really flying. I’m a happy second, despite wanting to win.” Heemeryck ended the day just 32 seconds behind Kienle. ‘Very proud’
It was Rodolphe von Berg (USA) who finished third. “It was a hard battle; I’ve never been in a race where the top six was so close. During the run, I knew this was my moment to shine. I wanted to finish on the podium, I had to give it my all to do that and I did. I can be very proudon myself.” Von Berg ended third, just a minute later than the winner.

‘Amazing to win for a third time in a row’
Lucy Charles dominated the whole race, starting the swim in her typical style as the fastest athlete and maintaining that with a strong bike and impressive run. “As soon as it was announced there was a full distance swim today, I was like ‘woohoo'”, she said post-race with a smile. “Despite the cold water and strong current, it went pretty well in the water. I was very pleased to have a two-minute lead after it, but I knew I had to bike really, really hard with such strong women behind me. Luckily, I felt very strong during the ride today.”
In T2 it almost went wrong for Charles, when she fell over her bike in front of the cameras. “I guess it was my worst transition ever… but on the run, I was strong again. It’s amazing to win here for the third time in a row.” ‘This means a lot’
Also very strong during the run was Radka Kahlefeldt. After starting the half marathon in fourth, she fought up her way to second by the finish, one place higher than 12 months ago. “Lucy is just another level, I really don’t know how she does it”, she joked after the race. “It’s amazing. Just like this race is amazing to me. To be on the podium here, it means a lot.” Kahlefeldt finished second, 5:11 behind Charles-Barclay. ‘It’s an honour’
Winner of Challenge Roth in 2018, Daniela Bleymehl (GER) took third place, in part thanks to a bike course record performance of 2:07:16. “It was a great day and I had so much fun on the bike.” Despite dropping from second to third during the run as Kahlefeldt caught her, she still finished the day very happy. “The Pro field is very strong, so it’s anhonour to end up third.” Bleymehl finished 6:42 minutes behind Charles.

Best Images: Gallery from the 2019 Challenge The Championship