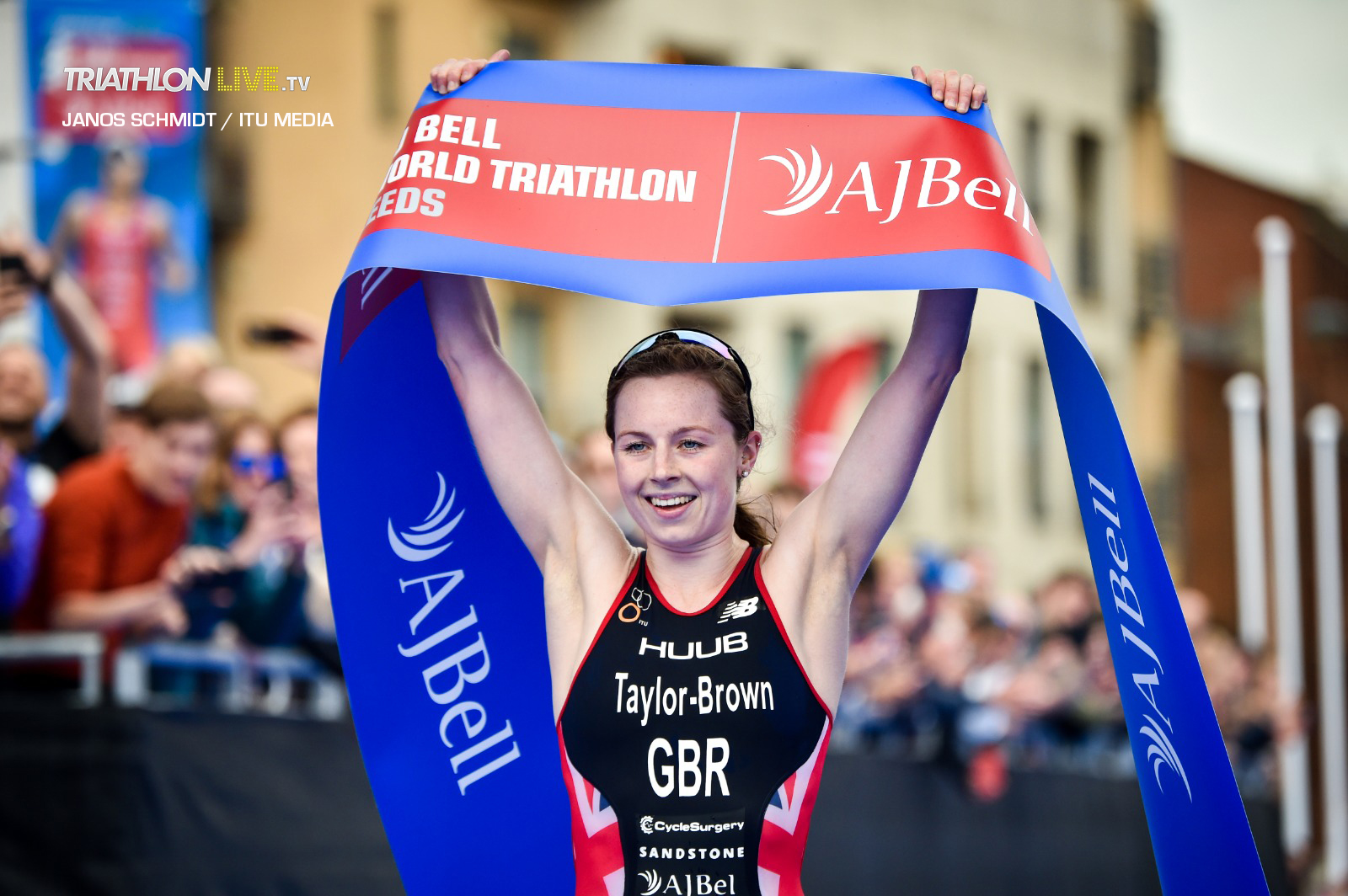 On a cool Summer ‘s Sunday afternoon in Yorkshire, Jake Birtwhistle became the first Australian since Brad Kahlefeldt to win a top-tier gold on the ITU circuit, nailing another incredible run to sweep past Spain’s Javier Gomez Noya and USA’s Matthew McElroy. The 24-year-old re-wrote the script as hometown heroes Johnny and Alistair Brownlee struggled to capitalise on strong positions during the bike segment, Mario Mola failed to close down a 60-second gap out of second transition and Vincent Luis had to out-sprint Marten Van Riel and Pierre Le Corre to claim a hard-earned sixth.

“It’s been a long time coming, but today I guess after a rough start to the year it’s nice to finally come out and put in a performance to show the world what i’m capable of and get that first win on the card,” said a very happy Jake Birtwhistle. “The swim was key, to be in the mix from the get go on the bike certainly makes my job a lot easier. We still had to work hard and it wasn’t easy but was able to stay at the front and stay safe and I was hurting on the run but could hang tough until the third lap when I wanted to go a bit earlier and not give Henri that gap.”

“I always knew I can mix it with these guys and this was dubbed the strongest ITU field ever so to come out and get the win is pretty special. There’s a big 18 months coming up and this is a big confidence booster for me.”

It was indeed a WTS Leeds starting line-up packed with some of the most successful triathletes of the past decade, boasting more than 70 WTS golds and over 160 podium places, as well as all six Olympic medals from the past two Games, between them.

One of those Olympic medallists, Henri Schoeman (RSA), was once again the fastest in the water over the 1.5km swim, New Zealand’s Tayler Reid and Jonas Schomburg of Germany right on his heels along with Marten Van Riel (BEL) and Pierre le Corre (FRA).

By the time the first athletes were through the T1, the Brownlee brothers and Javier Gomez among them, Mario Mola was 48 seconds back and Great Britain’s young gun Alex Yee a minute off the pace.

Johnny Brownlee was straight onto the power, hitting the point-to-point segment hard, the strong cyclist Van Riel right on his shoulder along with Schomburg. The gap to the chasers was up to ten seconds, but 6km in to the ride they had already caught up and a large peloton of 25 formed for the seven-lap city loop.

Another Brit, Tom Bishop, had led that charge and he then took up the baton with Norway’s Kristian Blummenfelt to go on the attack. WTS Bermuda winner Dorian Coninx (FRA) and Johnny Brownlee then took their moment to roll the dice, but with each charge, the pack dug in and caught once more, Vicente Hernandez (ESP) and Sam Ward (NZL) among the cyclists also flying.

See also:  S2 Sprint Distance triathlon series kicks off in Subic Bay, Philippines as a side event to 5150

Heading in to T2 the race was wide open. Richard Murray, Mola and Yee were among the danger men a minute off the pace, too far away to trouble the podium given the talent ahead. Alistair Brownlee was looking strong in the early stages, and he and Ireland’s Russell White dropped the pack for half a lap after Jonas Schomburg had put in a brave stint to set a rapid early pace.

Matthew McElroy had put himself into contention with a solid bike and began to close down on the leaders once more, Vincent Luis and Javier Gomez locked in battle while Henri Schoeman took to the front on the penultimate lap to lay out his challenge. He looked strong for much of it, too, but was caught by Birtwhistle who stretched out his legs with commanding ease once more and assumed the front spot.

From that point Birtwhistle never relinquished his grip, leaving McElroy to hold off Gomez and take a rare men’s WTS silver for the USA, the Spaniard’s bronze maintaining his position among the top ranking at the halfway point in the season. Henri Schoeman came home in fourth followed by Sam Ward and Vincent Luis, Van Riel in seventh.

The Leeds crowds were never off their feet on Sunday afternoon as they cheered home the latest graduate of Great British triathlon’s talent school, Georgia Taylor Brown. The 25-year-old delivered a sparkling debut WTS gold, clearly inspired once more by the surroundings as she played her hand early in the run and never looked back, going one better than last year’s silver with a mature, assured display.

“I had a really good swim, I want to thank Taylor Spivey for that,” said a delighted Georgia Taylor Brown after the race. “She got us in a good position around the first buoy, and then I fully committed in the swim, even though that really hurt. So much so that I was worried about how the bike would go, but then with Katie and Sophie we got things moving, and we worked really well as a group. The plan before the race was to run hard, but when we got out of transition I thought that maybe we couldn’t do it. I just tried to stay relaxed and in the last kilometre I was just enjoying myself.”

Conditions were close to perfect on an overcast Yorkshire afternoon at Roundhay Park, where two laps of Waterloo Lake awaited the athletes.

It was another brilliant swim from Jessica Learmonth that saw her out of the water first, Brazil’s Vittoria Lopes right with her and GB’s Sophie Coldwell also in close company. The dependable sight of USA’s Taylor Spivey and Katie Zaferes also mounting their bikes among the leaders meant they were well-placed for the 12.3km point-to-point, Taylor Brown and France’s Cassandre Beaugrand completing the seven-strong lead group heading out of Roundhay Park.

Further back, the likes of 2018 winner Vicky Holland and compatriot Non Stanford were looking to get organised in a large group that included Maya Kingma (NED) and Angelica Olmo (ITA).

They were soon joined by Beaugrand as she fell back on the first of seven laps of the technical city centre loop. Meanwhile the front six continued to work well and had extended their lead to 1:40 by the bell, Lopes still hanging on at the back but setting herself for a challenge on the 10km run.

That challenge rarely looked likely, however, as Taylor Brown and Zaferes stretched out a lead early on in the first 2.5km lap and, clearly feeling fresh as she bounded through the streets, the Brit then played her hand early on in the second, stretching away from the Series leader to challenge the American’s 100% record so far this year.

That lead quickly built up to 14 seconds but Zaferes responded well and, to the surprise of nobody, never let Taylor Brown out of her sight. At no point could she really eat away at that gap, though, and it was the Manchester born, Leeds-based star who afforded herself a glimpse over the shoulder with 200m to go to cue a huge smile as she realised for the first time that the WTS Leeds gold was undoubtedly hers.

“I am really happy,” said Katie Zaferes after her silver. “Last year I struggled in the bike section, and during the race today I was just thinking that it didn’t hurt so much. And Georgia then ran so well, and ten seconds never seemed so far away, I never gave up. Racing here in Leeds is different, but I quite like it. This was the last Olympic distance for a bit so i’m excited for heading to some sprint distance races now.”

“It was two hours of pain, and it really hurt,” admitted Jess Learmonth, “but I love racing here, the pressure of so many people cheering for you, the crowd is unbelievable.”

Ironman Expands Event Calendar in China With The Addition of Ironman 70.3 Xi’an