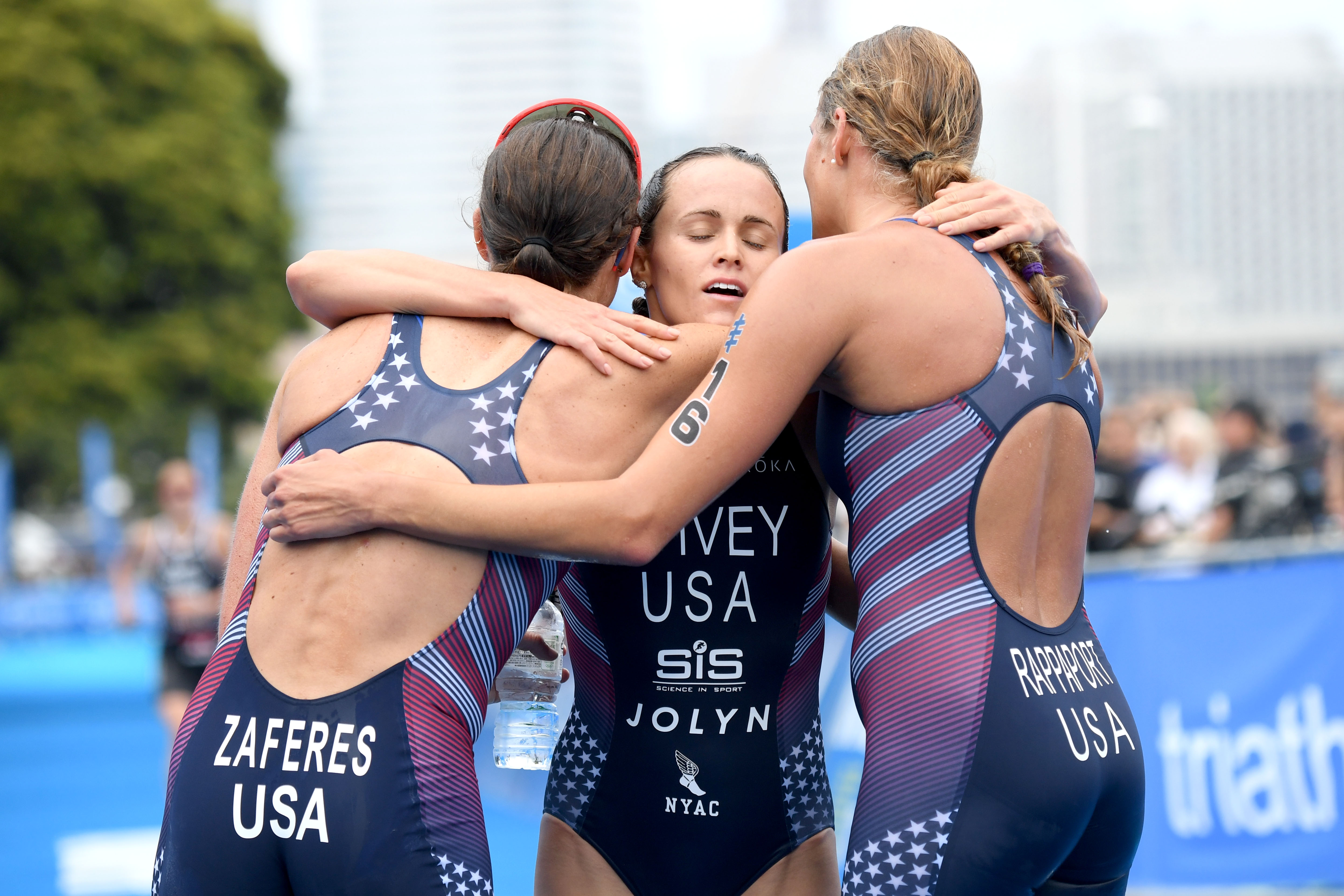 With an incredible run over the 10k, Vincent Luis claimed his first ever victory in WTS Yokohama to make a serious statement over his intentions of fighting for the Series trophy. The French had an impressive performance to beat almost over the finish line South African Henri Schoeman and young Hungarian hope Bence Bicsak.

50 men lined up this Sunday in Yokohama in the third stop of the World Triathlon Series, with Luis, Schoeman and Marten Van Riel (BEL) dominating the tough swim from the first strokes. They didn’t have the chance of breaking a large gap tho, and behind them into transition came a large group of athletes, including strong names like Javier Gomez Noya (ESP), Dorian Coninx (FRA) or Aaron Royle (AUS).

But as soon as they got out of transition, they were quickly joined by Jonas Schomburg (GER), Bicsak, Ilia Prasolov (RUS) and Alois Knabl (AUT). The ten of them rode together keeping the chase group at a safe distance between 30 seconds in the first laps and up to 56 seconds at the end of the 40km, working in turns to manage carefully the sharp turns and the different surfaces of the circuit. 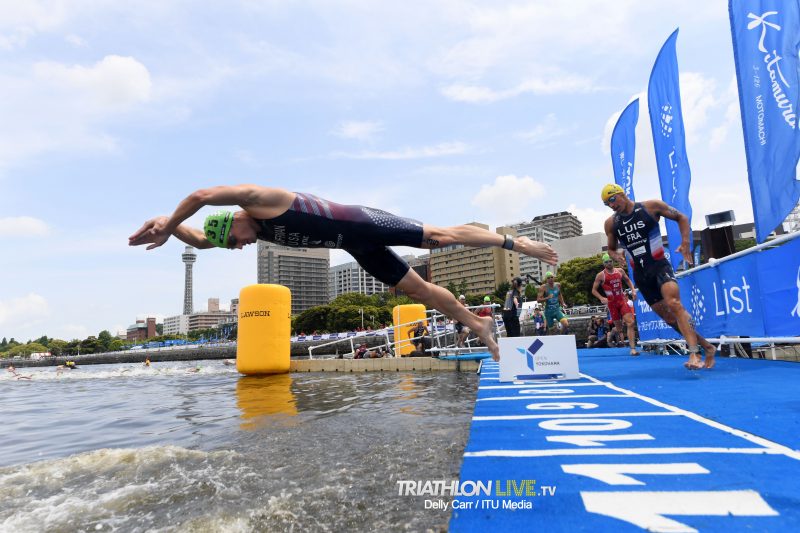 They all knew that some of the fastest runners of the field were in that second group, including Fernando Alarza (ESP), Alex Yee (GBR), Kristian Blummenfelt (NOR), Ryan Sissons (NZL) or Casper Stornes (NOR). And they also knew that some of the likely candidates to end in the podium were even further bak, with Mario Mola (ESP) having a dissapointing swim for the second time in a row, or Jake Birtwhistle (AUS).

When the group of ten changed the bike for the running shoes, Luis decided to push from the first meters and tried to break away, to be followed on his heels by Schoeman, Bicsak and Noya. The four of them added one extra gear to break away from the rest with more than 7km to go, and it looked clear that the battle for the medals was going to be on them… until they saw Yee.

Behind the leaders, the young and talented British runner started chasing rival after rival, reducing the gap with Luis in 30 seconds in the first 5km of the run. By then, the British looked exhausted and the four leaders increased a bit their path, so the efforts of Yee were in vain and he had to see Luis managing to sprint to the finish line to grab the victory in Yokohama, with Schoeman a few seconds behind.

Another final sprint, this time from Bicsak, saw the young Hungarian passing over Gomez to claim his first ever WTS podium after collecting the bronze medal in the U23 World Championships last year. Alarza, Luke Willian (AUS), Van Riel, Sissons and Sam Ward closed the top ten positions for the day.

The race that was indeed “the hardest race” of the season for Luis. “I didn’t feel great at the start and wasn’t expecting to have a great race but I just wanted to keep my lead and I worked hard on the breakaway. I tried to lead as long as I could during the run, which I did not do in Bermuda and it cost me a bit. I think today I was one of the strongest and I am really happy that it played off”, he explained.

Keeping that lead was not easy, knowing that Yee was coming behind them. “We heard when we left the bike that he was about 50-seconds behind. I was sure he was going to reach 30-seconds in the first 5-kilometre because we really started slowly and I know Alex is a fast starter. We saw this in Cape Town in the World Cup, how he extended his gap pretty quickly. After the second lap, I started to push at the front to make the others think a bit and I think it was a good idea because I was able to respond after they tried to attack. That was my tactic, to just let behind me suffer until the last few hundred metres, and it paid off”, he said.

With three WTS races in the pocket and three more to go before the athletes head to the Grand Final in Lausanne, the French is leading the Series with almost 500 points over Fernando Alarza, who sits in second place for the moment. But Luis don’t want to think about the end of the season yet. “I am always thinking about my squad mate Katie (Zaferes). She was leading into Gold Coast and she lost the title. Until the finish line in Lausanne, I am not going to expect anything. I am just racing. If I can lead until that I will be happy. If someone else is stronger than me, I will be happy for them to win.”

With a dominant performance, American Katie Zaferes claims a hat trick in the 2019 World Triathlon Yokohama, with teammates Summer Rappaport and Taylor Spivey accompaniyng her in the podium in the fourth podium sweep for USA in the history of WTS.

On a beautiful morning in Yokohama, the race started to unfold right when the elite women where taking their positions in the pontoon, with Katie Zaferes, wearing the golden number 1 swim cap, going to the left and the Brits and the other Americans heading to the right side. By when the triathletes made it to the first buoy there was a long line of them, with Jessica Learmonth leading.

The 1500 swim in the choppy water in Yokohama ended up with Learmonth leading out of the swim, followed close by Maya Kingma (NED), Spivey and Zaferes. But as soon as the leading females were in transition, they were joined by Yuko Takahashi (JPN), Summer Rappaport (USA) and Lotte Miller (NOR) and the seven of them started to work immediately on building up a lead enough to guarantee them a safe position at the end of the race. 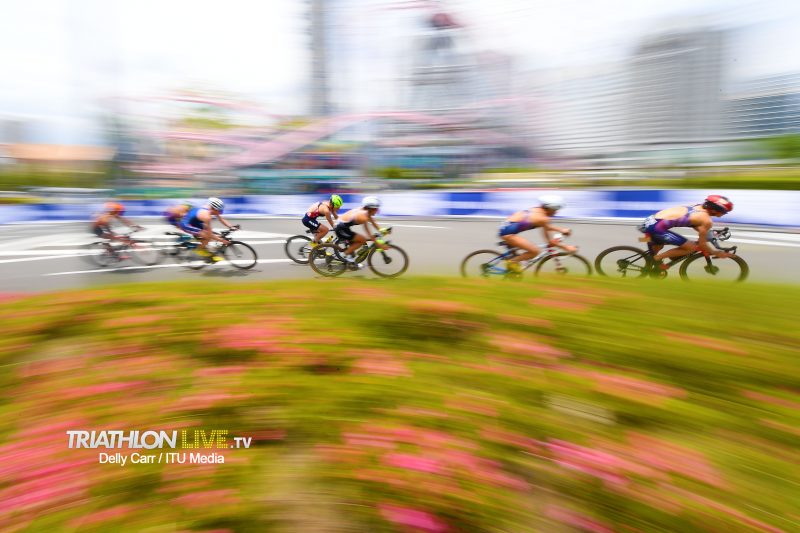 By the third of the 9 laps of the technical and flat bike course, the seven leaders had managed to gain almost 30 seconds over the large group of chasers. Behind them, Non Stanford (GBR), Georgia Taylor-Brown (GBR), Emma Jeffcoat (AUS), Natalie Van Coerden (AUS), Alice Betto (ITA) and Tamara Gorman (USA) tried to organise themselves to chase them, but the leading athletes seemed well organised and the efforts of the chasers were in vain. By the time the 40km on the bike were over, the seven female leaders had almost one minute, and new that the fight for the medals was going to be on them.

As soon as the athletes got on their running shoes, Katie Zaferes proved that she is indeed the one to beat this season, and charged hard in the first meters, only to be followed by her teammate Rappaport. The American duo dropped quickly Miller, Kingma and Learmonth first, and then Spivey and Takahashi, who kept running shoulder on shoulder for most part of the 10km run.

Kilometer after kilometer, both duos were testing each other, with Zaferes looking cautiously left and right knowing than Rappaport has a really strong run, while Spivey did the same thing with Takahashi, cheered by the thousands of local spectators gathered in Yokohama since very early in the morning.

Zaferes wait until the last 500 meters to do the final push, and without looking back added an extra gear enough to cross the finish line in first place, getting her first ever victory in Yokohama. Behind her, almost crying, Rappaport, and both of them waited smiling for the third American to cross the finish line, Spivey, who had managed to drop Takahashi also in the last meters of the run.

The clean podium sweep in Yokohama marks the fourth for USA team, with the bars and stripes filling all the steps on the podium also in London, Gold Coast and Edmonton, and with Zaferes being in the podium in all four of them.

Takahashi, extremely happy with her fourth place, claimed the best place for a Japanese athlete in Yokohama in the last years, while Taylor-Brown, after a fantastic run, finished in 5th place, followed by her teammate Learmonth in 6th and Maya Kingma in 7th, her best result ever on a WTS.

“It was definitely a different race than the last couple of ones in Abu Dhabi and Bermuda, and Summer pushed me on the run the whole entire time. In the bike we did a great job. We had a committed group again. It’s just pushing every single lap of the race and committing to each one. Just trying to get more time on the other ones. And then on the run I tried to be more tactical with little pushes and that last lap, I just really pushed the hill, I got a break but decided to keep pushing because I didn’t know if she was coming up behind me”, she said.

After finishing in a bitter sweet second place overall in the Series in 2018, the 2019 season couldn’t have started better for the American, with a hat-trike on her bag and leading the rankings by more than 500 points over Jessica Learmonth. “Every time I think this has got to end sometime, but I go for it each time. I am using a more risky mindset where I am just trying different things and I think it makes it more fun and it’s going well,” she explained.

Rappaport couldn’t hold the tears after crossing the finish line to get her second WTS podium on her career. “I had a really difficult 2018 and then my first WTS in Abu Dhabi didn’t go as I hoped. I have been working hard, I took a lot of gains but just wasn’t able to transfer it into my racing. Today I was able to work with myself and make everything work. I feel like I have been doing my best training for a while but I just couldn’t put it together and it was so difficult and discouraging. Today I felt like my work just finally came through. You have no idea how much I have prepared and trained for improving my bike skills. It wasn’t necessarily that I couldn’t do it, I had to focus issues where I couldn’t get myself to hold in on race situations. Today I was able to figure it out and perform the way I am able to train,” she said.

The third American, Taylor Spivey, fought during almost the 10km run with her training partner Yuko Takahashi, who she could only leave slightly behind in the last meters of the race. “I wouldn’t say it was a battle with Yuko. I train with her every day and I was so happy to see her in podium contention. I just wanted the best for her. We worked together, I told her to sit on my hip and she did and I am so proud of her”, she said.