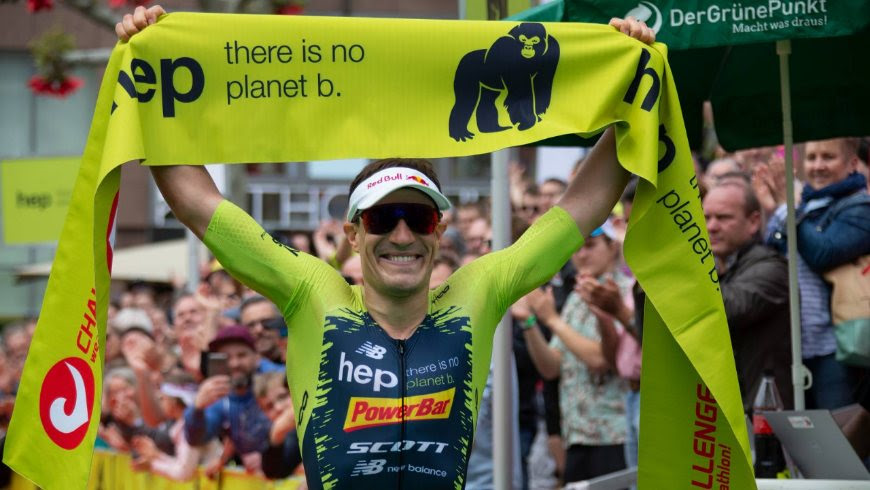 The 10th anniversary of hep CHALLENGEHEILBRONN powered by Audi turned out to be a perfect day for the defending champions Sebastian Kienle and Daniela Bleymehl. Despite Kienle’s previous achilles tendon injury, both he and Bleymehl were in top form and able to defend their titles.

Up until race day, the weekend looked far from being perfect. he weather forecast predicted rain and the water temperature in the week leading up to the event was just slightly above the magical 14°C that was required to allow the swim at all.  But as it turned out, the weather was in favour of the triathletes and spared them from thunderstorms and rain. On race morning, the water temperature rose to 15,7°C which meant the race could go ahead as a traditional triathlon with obligation to wear a wetsuit for all distances.

Besides taking place much earlier in the year, the organisers also made a number of changes to the race compared with previous editions. These included the bike course going in the opposite direction and the Olympic distance athletes starting the race ahead of the Challenge Half athletes. On top of all these changes, hep CHALLENGEHEILBRONN powered by Audi was also host to the German Championships.

This year, the main race started at a particularly unusual time. At 8:20, the men’s pro field was first to start the 1.9km swim, 84km bike and 21km run. Five minutes later, the pro women joined them in the water. First out, was the new local hero, Florian Angert, who recently moved to Schwaigern, one of the nearby towns and indeed one of the bike course sections. Defending champion, Sebastian Kienle left the water about 2 minutes later, with several competitors between himself and Angert.

Defending Champion Kienle, former Heilbronn Champion from 2014 Andreas Dreitz, and former professional cyclist Ruben Zepuntke from Dusseldorf soon formed the leading group on the bike. All three took turns to take the lead and break away from the chasing pack and it was Zepuntke who rode the fastest bike spilt.

Kienle was not only first to change his shoes at T2 but never gave up his leading position throughout the run and was able to defend his last year’s title in 3:45 hours. Behind Kienle, the race got very exciting. Florian Angert dismounted his bike in fourth position but soon caught up with the chasing athletes and passed them to take 2nd place overall. A strong run by Ruben Zepuntke enabled him to pass Andreas Dreitz and complete the podium in 3rd position. Kienle was very satisfied with his race. His achilles tendon injury that hindered last year’s race season didn’t bother him at all, his biking was fine and the final run just perfect.

In the women’s race, defending champion Daniela Bleymehl, who competed last year under her maiden name Sämmler, was in the leading pack right from the very start of the race. Fastest in T1 was one of the favourites for the race, Laura Philipp, who overtook the fastest swimmer Saskia Käs, already in the transition zone.

On the bike, Philipp was in no doubt that she could add another victory in Heilbronn to her to her season opening win this year. She was already top of the podium in Heilbronn in both 2015 and 2016. Having led the bike, Philipp completed two of three running laps before having to retire due to pain in her leg. Daniela Bleymehl took advantage and made her triple perfect. With the second fastest run split and a lead of over 10 munutes, she celebrated her third victory in a row in Heilbronn in 4:18 hours. „The water was a bit cold, but I felt really good and I’m so happy about my win“ Bleymehl announced after the finish.

Behind her, the rankings remained the same from bike to finish. Dutch athlete Els Visser held on to second position after the bike and Swiss athlete Corina Hengartner finished third.

Overall, hep CHALLENGEHEILBRONN powered by Audi not only offered perfect race conditions for the pros but for all of the 2.300 starters. The weather warmed up, all the courses were perfectly prepared and crowds lined the streets to cheer on the triathletes both in the city and along the bike route for all three distances, Challenge Half, Olympic and Sprint distance. All in all a perfect day #inthemiddleofthecity.

All information and results can be found on www.challenge-heilbronn.de

How To Ride Into A Headwind | Should You Increase Your Power?