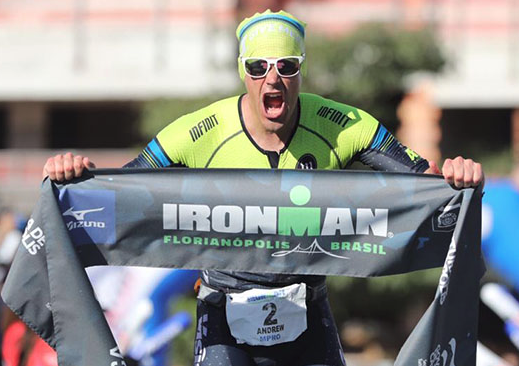 Andy Potts (USA), Igor Amorelli (BRA) and Will Clarke (GBR) rode together for the first 140 kms before Potts took matters into his own hands. The American put in a huge effort in the final 40 kms and would eventually carry a four- minute advantage into the transition on the pair. Potts was solid throughout the run as Amorelli faded and a persistent Clarke equaled the leaders’ pace, but was unable to make any significant gains for much of the 42 kms. Potts would cross the finish line to claim the IRONMAN Brazil title in 8:02:58

Sarah Piampiano (USA) made the pass on Pamella Oliveira (BRA) in the early kms of the second of two laps of the bike and never had to look back. A five minute advantage at the end of the 180 km bike ballooned to over 23 minutes at the conclusion of the marathon as Piampiano punched out a 8:40:49 winning time.

The 2013 IRONMAN world champion Frederik van Lierde reigned in the wind, the men’s pro field, and tough conditions at the Club La Santa IRONMAN Lanzarote. The Belgian was solid all day long and paced himself steadily to take his ninth IRONMAN title in 8:51:16. For several hours, Andreas Raelert (GER), Jaroslav Kovacic (SLO) and Christian Kramer (GER) battled with van Lierde, but Raelert and Kovacic had to drop out while Kramer finished in runner-up position in front of Spanish rookie Emilio Aguayo Munoz after a tough day.

Nikki Bartlett (GBR) was exactly five minutes down in the water, but she took over early and nailed a great win after a consistent and dominant performance at the front. Early leader Rachel McBride (CAN) earned sevebtg place although she had to do the bike with a road bike after a crash a few days before. Former golf pro Maja Stage Nielsen (DEN) celebrated silver at her second home place in front of Lenny Ramsey (NED) who rounded out the podium after a stunning marathon of 2:58:59.

Franz Loeschke nailed a great run to take the win at the IRONMAN 70.3 St. Poelten. He was in the mix all day long, but he waited long for the decisive attack. On the bike, Loeschke was always in the top five, but he didn’t overpace. With a little more than one kilometer to go, Loeschke passed the Austrian leader Thomas Steger and out-sprinted the strongest biker in 3:52:37.

Sweden’s Sara Svensk was a bit behind the best swimmers, but she caught up early with the other top favorites and made her breakaway on the bike. Austria’s Bianca Steurer was only 90 seconds down after the bike, but she couldn’t get any closer on the run. Svensk took St. Poelten in 4:26:05

How To Choose A Bike Saddle For Triathlon