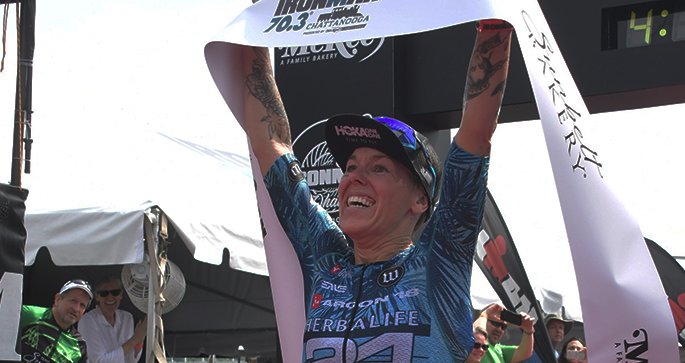 Heather Jackson (USA) has been no stranger to the top step of the podium in Chattanooga.  The American once again was was found on the winner’s platform spraying the celebratory champagne at the IRONMAN 70.3 Chattanooga finish line. Jackson managed to hold off a persistent Skye Moench (USA) throughout the run to claimed the her fourth consecutive victory in Chattanooga on the strength of the race-best bike and run splits.

Sam Long (USA) worked hard to eliminate all of his +3:20 time deficit and 14th place finish in the swim over the 56-mile single loop bike course. Coming off the bike with lead and then laying down a solid 1:15:22 run, Long took the victory by a 1:53 winning margin over Jackson Laundry (CAN).

South Africa’s triathlon pro rookie Nicolas Dougall really mixed it up on the bike. The former professional cyclist had a good swim and hammered away on the second half of the challenging bike course. The two strong runners Bart Aernouts (BEL) and David McNamee (GBR) worked hard to get into the driver seat on the run, and Aernouts clocked a fast half marathon to take the win in 4:05:07.

Fenella Langridge (GBR) and Germany’s Anja Ippach battled it out hard for a long time. The British had the quicker swim, but Ippach was almost at her shoulder and moved away later on the bike. She pushed enormously to open up a gap, but she had to pay a lot for that effort on the run. Langridge ran to a solid victory in 4:37:42.