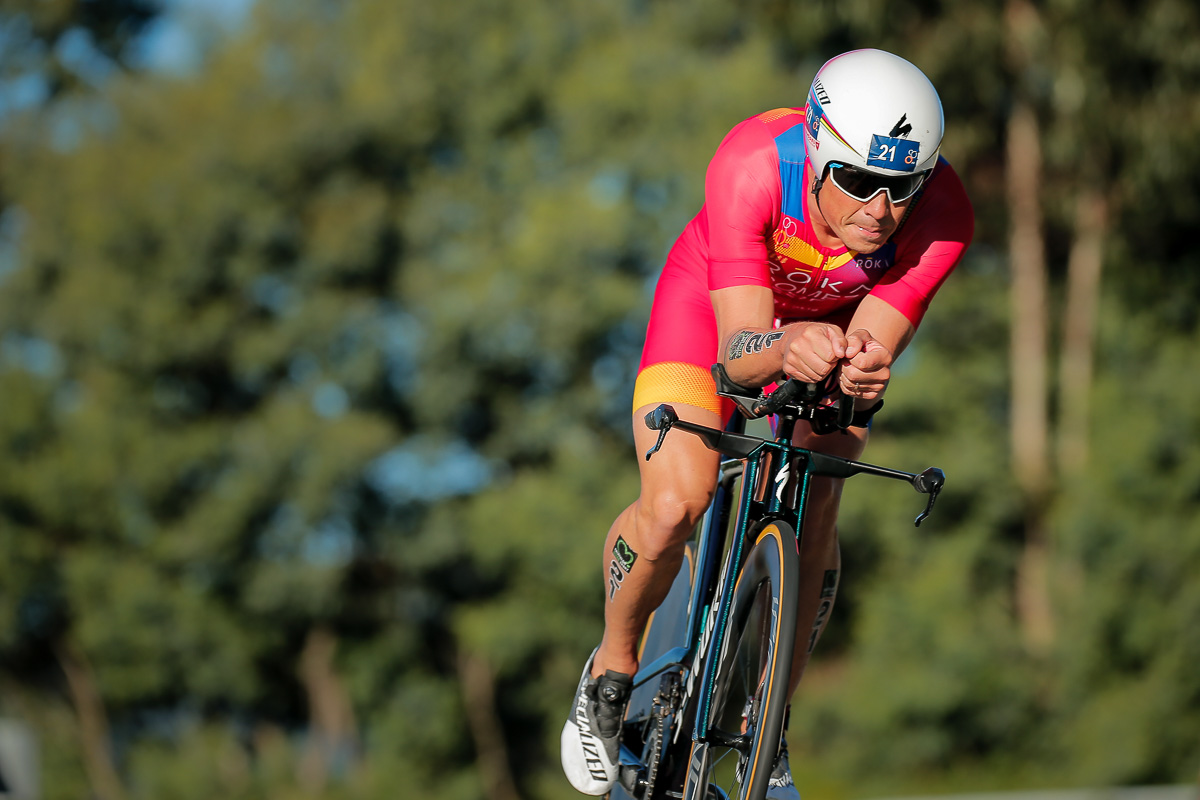 The Spanish city of Pontevedra was the backdrop for the 2019 ITU Long Distance Triathlon World Championships.

40 elite men lined up to battle it out for the world title. Spain’s hero of the sport Javier Gomez established an early lead in the shortened 1.5km swim and was the first man to exit the water, move through transition and head out onto the bike. Defending champion, Pablo Dapena from Spain, was hot on the heels of his fellow Spanish team mate.

Gomez, who made the switch from his road bike when racing in the World Triathlon Series race Bermuda last weekend to the time trial bike in the long distance race in Pontevedra, charged out in front to lead the elite men’s race.

The top ten men were 1-minute-37-seconds down, coming out of transition and on the hunt to chase the leader.

Gomez, riding solo across the long climbs, led the first stage of the bike course, however New Zealand’s Terenzo Bozzone, who was 1-minute-7-seconds down coming out of transition, impressively closed the gap on Gomez and took control of the race.

Silver medallist in 2018, Ruedi Wild was among the chase group, riding 45-seconds down on the leaders.

After the first bike lap, the lead group now consisted of Gomez, Dapena and Miki Taagholt from Denmark and Frenchman Sebastain Fraysse, 45-seconds ahead of the chase group.

Bozzone, Gomez, continued to ride to their strengths out on the bike course as they past the halfway point.

With 50-km of the bike course to go, Lukas Kocar from the Czech Republic made a move to go past Gomez, to lead the group of men on the climb.

Bozzone, who put in tremendous effort to close the gap to position himself in the lead, remained in the front group. By the 100km mark, Denmark’s Kristian Hogenhaug caught up to the lead with Gomez and Bozzone riding in front. Dapena was 8-seconds back with Spain’s Albert Moreno Molins, Frenchman Antony Costes, Slovenia’s Jaroslav Kovacic, Frenchman Fraysse and Wild in the chase.

Within the final kilometres of the bike course, Bozzone led the men back through the city and into the final transition of the day. Seven athletes, within 12-seconds of one another, made it into transition. Bozzone, Gomez, Dapena, Molins, Hogenhaug, Gomez, Wild hit the course for a running showdown.

It was at this point that we were asking if the long-distance specialists would settle in to the run quickly or would someone be bold enough to attack and prove a point?

For the first lap of the run course Bozzone, a decorated long distance triathlete and national running champion, was striking in lead.

Charging hard behind the New Zealander was a trio of Spanish athletes, spread out across the course, which included Gomez, Dapena and Molins.

Hogenhaug, who was with the elite men into transition, dropped off the pace in the early stage of the run.

Gomez pushed the pace back into the stadium and spurred on by the cheers of a home crowd, took the lead. Bozzone and Dapena were on the hunt behind.

At the end of the first run lap Gomez was charging with an 18-seconds lead ahead of defending World Champion Dapena. Bozzone was on the hunt and running in third position, 55-seconds back on Gomez.

Gomez dominated all four laps of the run, pushing the pace and being edged on with a home crowd chanting his name as he ran through the streets of Pontevedra.

Dapena looked incredibly strong and held onto second, on the hunt for Gomez but didn’t quote have the leg power. Bozzone lost grip of his striking run set-up and pulled back into seventh position.

Gomez looked incredible as he made his way to the blue carpet and in a powerful and emotional way, took the tape to be crowned 2019 ITU Long Distance World Champion and king of triathlon in Spain.

“It was unbelievable; the crowd was so amazing. It was so hard, especially that last lap on the run and they pushed me all the way and I am so glad I got this one at home. It was a very special day and I am really happy with my performance.

“It was a tough day. I felt good on the bike, it was a good bike course for me, really hard. I had some energy for the run. Everyone started really fast out of transition and I knew we would blow up, lucky I am the last to do so. I am really happy,” said Gomez.

Defending champion and fellow Spaniard Pablo Dapena produced a powerful swim, bike and run combination which enabled him to storm home with the silver medal.
“For everybody supporting, for me I was crying because I never expected a crowd like this. I stopped before the finish to walk and enjoy it. I’ll never forget it in my life,” Dapena said.

On the final stage of the running race it Kovacic attacked with a strike and charged across the finish line to claim bronze.

“I cannot believe that I achieved third place, I knew I was well prepared so tried to stay close o the swim, we closed the gap on the leaders. It came down to the run, amazing performance for me. I am so so happy and excited, over the moon. The crowd here is amazing. Pontevedra will stay in my heart,” said Kovacic.

In the elite women’s race Denmark’s Camilla Pedersen produced a quick swim across the shortened 1.5km format, to exit the water with a 40-second lead. The Danish triathlete, who claimed fourth in 2018 Fyn ITU Long Distance Triathlon World Championships, lost 35-seconds in transition but still managed to lead out onto the bike.

Swiss triathlete Emma Bilham made an early statement to catch up to the swim leader, however a mechanical fault forced her to pull over and lose time in the initial portio of the bike race.

After the first turnaround point it was France’s Manon Genet who put the power on the bridge the gap and take the lead over Pedersen.

After the first of three laps Pedersen led the group of women into the heart of Pontevedra city, 3-seconds ahead of Tondeur and Spain’s Noguera.

Fellow Spaniard Judith Corachan Vaquero was riding in fifth place and looking to make an impact in front of a home crowd.

Maja Stage Nielsen, a strong contender leading into today’s race, was in sixth place riding 1-minute and 34-seconds down on the race leaders.

Bilham, who was the fastest lady in the early stages of the race was now sitting in seventh position after the first of three bike laps.

During the second bike lap Genet controlled the race from the front, with a group of three ladies featuring Pedersen and Tondeur.

In this position Tondeur had set herself up for a fantastic race, marked as the strongest runner sitting in this lead group.

Noguera and Vaquero had dropped off the pace and were 1-minutes-45-seconds back. Bilham and Nielsen a further 2-minutes.

On the final stage of the bike course, the trio of women remained in the charge. Genet, Pedersen and Tondeur made a serious gap into competition and no women behind them were choosing to move.

As the ladies made their way on the third and final gap, towards transition, Genet held onto the lead seat with Pedersen and Tondeur in second and third. Vaquero and Noguera were 4-minutes down.

On the final straight it was Genet who led the women back into town. The French woman produced a fast transition to commence the 30-km run, followed by Pedersen. Tondeur was 30-seconds back.

Pedersen and Tondeur, both strong runners, knew it was going to be a fast and tactical running race. Hopefully adrenaline and spectator support would assist the injured Pedersen to produce a comfortable run. At this stage of the race, the competition were already 5-minutes down on the lead runners.

Unfortunately, after the first lap of the run Pedersen, who was the front runner of the women’s race, was forced to retire.

Tondeur took control of the race and was dominating the 30km run, as the elite women circled the stadium, across four laps, in the heart of Pontevedra. Genet served a 60-second penalty with 5-km to go on the run which forced her to lose momentum and sight of podium contention.

This was enough to urge the chasing Spaniards to make an impact and run shoulder to shoulder. With the top spot on the podium all decided, the Spanish team mates were battling for silver and bronze.

With the finish line in sight Tondeur started to celebrate. In an emotional finish, the Belgian was awarded the 2019 ITU Long Distance World Championship title.

With the two Spaniards running strong, it was Vaquero who sprinted ahead in the final stage to cross the line and be presented with the silver medal and Noguera was awarded the bronze medal in front of a celebratory home crowd.

Alexander and Sheedy-Ryan blast in Busselton 70.3