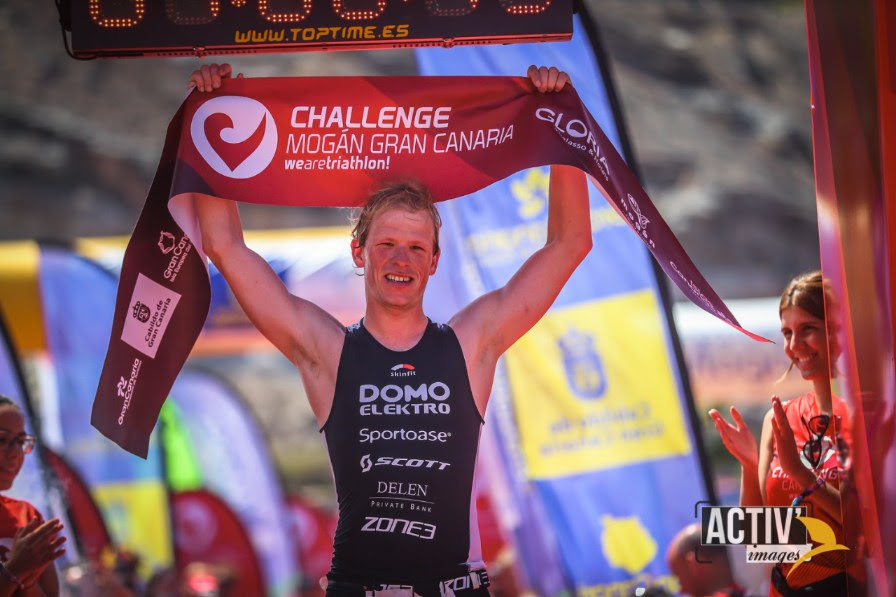 Both Emma Pallant and Pieter Heemeryck met the organisers´ and fans´ expectations and rose to the occasion in the fourth edition of CHALLENGEMOGAN GRAN CANARIA. Emma Pallant repeated her triumph of 2017, becoming the queen of the race after finishing in 04:36:07, almost 13 minutes ahead of runner up Tessa Kortekaas from the Netherlands. Herewith Emma Pallant is the first triathlete to repeat her victory at CHALLENGEMOGAN GRAN CANARIA. And after winning CHALLENGESALOU two weeks ago, Pieter Heemeryck added just another title to his already impressive winning strike.

The start of the race was dominated by Swiss Celine Schaerer which finished the swim in 28 minutes. Pallant came out of the water a minute and a half later. On the first half of the bike course, the Swiss could keep her lead over Pallant, despite  the fact that the British athlete is regularly doing training camps on Gran Canaria and therefore is very familiar with the roads. But Pallant took over the lead at the run and secured her victory in an impressive time of 04:36.07. Dutch Tessa Kortekaas finished second in 04:48:58 and managed to overtake Shaerer 04:51:03 in the run.

In the men’s category, Swiss Manuel Küng led the field in the swim to be first in Transition 1. Pieter Heemeryck followed with a small gap of 35 seconds and was able to pass Küng in the last third of the run course to finish in 04:00:44 including the best run split of the day (01:12:44). Spanish Nan Oliveras finished third in a time of 04:04:13.