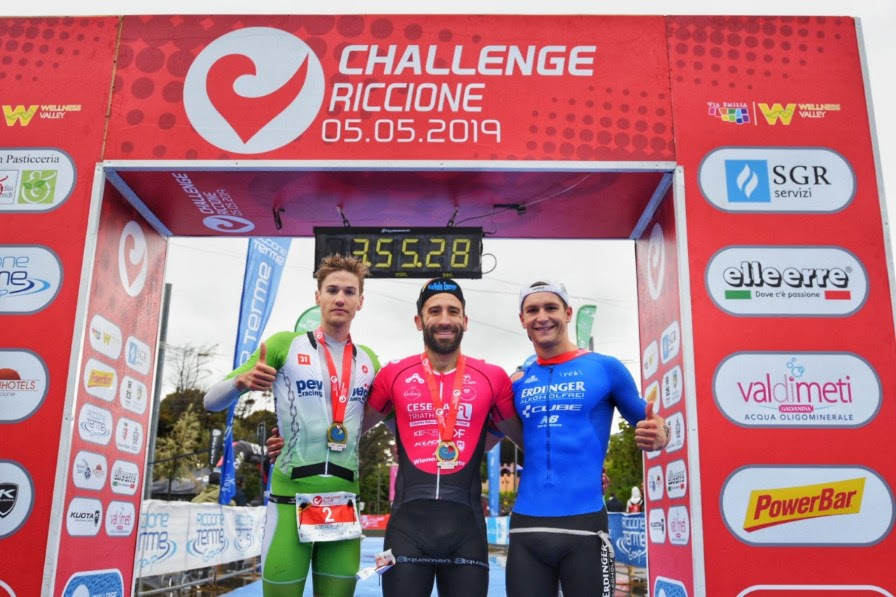 CHALLENGERICCIONE was one big party for the 1500+ athletes who participated in the 2019 edition. The event attracted a huge crowd of spectators to the race start on Sunday morning and the tension could literally be sensed among the pro athletes. After 113 kilometers of racing in challenging weather conditions, it was Elisabetta Curridori, who finished first in the women’s pro field in a time of 4:25:04 and Mattia Ceccarelli, who took the win in the men’s category in a time of 3:51:50.

It was Mattia Ceccarelli who set the pace from the beginning of the swim and entered T1 with a 12 second lead over German Frederic Funk. Last year’s winner, Giulio Molinari was trailing just 6 seconds behind. At the 27 kilometer mark of the bike course, the three leading men were cycling close together and it was Austrian Thomas Steger who was able to reduce the gap to a 2’30 minute margin from the chasing pack with Christian Birngruber and Jordi Montraveta. Molinari and Ceccarelli entered T2 together to go into the final run discipline. Going head to head towards the 10 kilometer mark, both men were pushing the pace until physical problems forced Molinari to walk and brought about a preliminary win for Ceccarelli, who was the only man leading the field. Funk moved into second position halfway through the race, followed closely by Steger. Ceccarelli finished the race in a fantastic time of 3:51:50 and was able to hold off Steger, who was able to pass Funk on the run, to finish second.

In the women’s pro field, it was Margie Santamaria with the fastest swim split, followed by the Swiss athletes Michelle and Nina Derron. Fourth and fifth in T1 were the two Italians, Michela Menegon and Elisabetta Curridori. At 27 kilometers, it was Santamaria still leading the bike, followed by Nina Derron. The Austrian Bianca Steurer was able to move up to third position, but still trailed 2 minutes behind the others. Elisabetta Curridori kept a high pace during the first kilometers on the bike and reduced the gap to Santamaria and Derron. At the halfway point of the bike leg, Santamaria was still in the lead with Derron one and a half minutes behind. Meanwhile, Curridori, 2’20 minutes behind, was able to pass Steurer and entered T2 close behind Santamaria. Finishing off with a strong run, Curridori was first to cross the finish line in a spectacular time of 4:25:04. Santamaria followed a minute later and Steurer completed the podium in third position.

Strength Training On The Bike | Over Gear Sweet Spot Workout